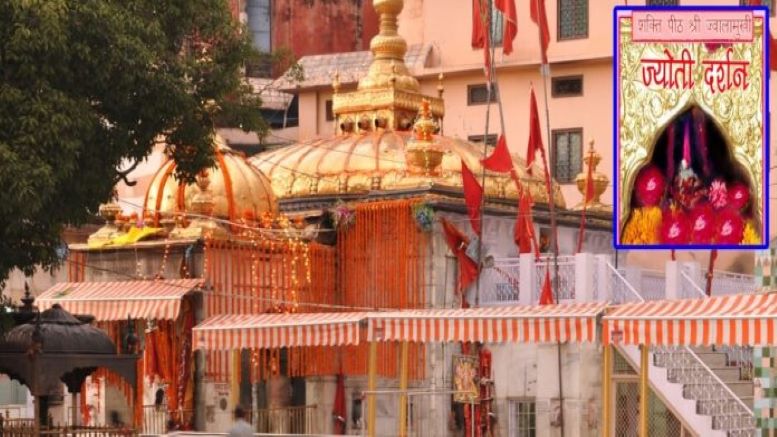 An instance of two Muslims being employed in the Shaktipeeth Maa Jwalamukhi temple in Kangra district of Himachal Pradesh has come to the fore. The issue came to light when VHP leader Girish Bharadwaj tweeted about it asking for freeing temples from government control.

Apparently, Jashan Deen and Shakeen Mohammad were appointed on temporary basis as langar sevadars (cooking/prasad department employees) in the holy shaktipeeth temple by the previous Congress government in 2017. Hindu devotees, including the non-government members of the temple board, had been opposing their appointment for a long time but nothing came of it.

Recently, it is alleged that the two Muslims were regularized while other Hindu temporary workers, some working for as long as 32 years, were ignored. This led to an escalation of protests, and finally the Kangra District Collector IAS Rakesh Prajapati was forced to issue an order transferring the two Muslim men out of the temple and to the district headquarters. Interestingly, the order adds that ‘salaries of the employees shall be claimed and released by the Jwalamukhi temple’ – whether this refers to only current salary due to them for the days worked this month, or whether the temple will continue to pay salaries for them going forward, is not clear.

Girish Bharadwaj spoke to OpIndia and said “temples are not tourists spots and should not be treated as one.” Commenting on the appointment of non-Hindus he said, “we cannot expect someone who is not emotionally connected or believes in that place of worship to work efficiently in the administration”

A report by Dainik Jagran states that the Himgiri Hindu Mahasabha had earlier submitted a memorandum to SDM Ankush Sharma asking for the cancellation of these appointments. They had stated in their memorandum that the failure to cancel the appointments would lead to a state-wide agitation.

The Mahasabha highlighted the injustice meted out by the administration which gave permanent appointments to the two Muslims appointed on temporary basis just 3 years back, while ignoring at least 3 Hindu employees – Rameshwar (appointed in 1989), Vidhu Chand (appointed in 2000), Sandeep (appointed in 2006) – who have been toiling away as temporary staff for far longer. International Hindu organization Kesariya Hindu Vahini had also come forward to object these appointments.

It has further been highlighted that MLA Ramesh Dhawala who is the State Planning Board’s Deputy Chairman had put forward a proposal to appoint the aforementioned two Muslim employees to other departments right at the start in order to avoid complications. The administration is, however, believed to have gone ahead and regularized their appointments without taking anyone into confidence.

The appointments had also been opposed by the nine non-government members of the temple. Furthermore, multiple resolutions had been passed against the move and the same had been submitted to the Deputy Commissioner, Chief Minister and Governor office through SDM Jwalamukhi. However, all such petitions had been ignored by the bureaucrats until recently.

In the meanwhile, Kangra District Collector Rakesh Prajapati (IAS) offered a ‘clarification’ through his official Twitter account when questioned by MP Subramanian Swamy regarding the appointments

Here is an update from DC Kangra @DcKangra when Dr @Swamy39 raised the issue of 2 Muslim officers appointed as caretakers of #Jwalamukhi Hindu temple. Those were appointed by pervious Govt n now shifted elsewhere! pic.twitter.com/CnM6mKmaP5

The DC said that the two had been employed in 2017 by the ‘previous government’ and that they have been transferred to the district headquarters located 50 kilometres away in order to ‘maintain law and order as well as communal harmony’. He pushed the blame on Hindus for objecting to the Muslim employees working in a temple ‘even though’ they were posted in the temple rest house.

Here are some questions that the IAS officer must answer:

1.) Why did it take over 3 years for him and his predecessor DCs (CP Verma and Sandeep Kumar) to transfer these Muslim employees out of a Hindu temple, if he now admits that this move was necessary to maintain ‘law and order and communal harmony’?

2.) Why is he presenting Hindus as the ‘intolerant’ party by claiming that the employees were only posted in the rest house? Surely, he can’t be unaware that the basic teachings of Islam and Christianity present ‘idol worship’ as the worst sin, and say that ‘idolators’ will burn for eternity in hellfire? So how can a practising Muslim or Christian have even the slightest respect for a Hindu holy spot where murtis (‘idols’ in Abrahamic parlance) are worshipped? Both the Muslim men might be efficient workers and respectful of Hindu beliefs (which would place them at odds with fundamentalists in their communities) for all we know, but why is the administration of a secular State hellbent on thrusting them down the throats of Hindus?

Why these double standards, when the same secular State passed the Waqf Act, which governs the creation of autonomous Waqf Boards to administer a ‘waqf’ i.e. Muslim public religious and charitable property, and the said Act states –

23. Appointment of Chief Executive Officer and his term of office and other conditions of
service.— (1)There shall be a full-time Chief Executive Officer of the Board who shall be a Muslim and shall be appointed by the State Government, by notification in the Official Gazette, from a panel of two names suggested by the Board and who shall not be below the rank of Deputy Secretary to the State Government, and in case of non-availability of a Muslim officer of that rank, a Muslim officer ofequivalent rank may be appointed on deputation.

Note: While Waqf Boards provide high level administration, the day to day operation of a Waqf is in hands of custodian/care-taker known as Mutawalli. Also, many large Muslim bodies like Deoband, Jamaat-e-Islami etc maintain their mosques and other institutions completely independently. As the Waqf Act states, there is no question of a non-Muslim being appointed to a Waqf Board, and the same restriction would naturally apply to anyone employed in a Waqf property.

Even the Hindus who are employed in our temples must be made to sign affidavits and take oaths to declare their faith in Hindu Dharma, murti-puja, and most importantly the deity worshipped in a particular temple and the traditions associated with it. Given the brainwashing done by our secular State and polity, and the discriminatory laws imposed upon us, practicing Hindus have every right to be suspicious of every action of the State which concerns our religious places and institutions.

3.) Why were the Muslim employees made permanent, ignoring the claims of Hindu temporary staff that had been appointed for far-2 longer?

This issue must not be allowed to blow over, with just the band-aid solution of transferring the Muslim employees to the DC head-office. The District Commissioner, Kangra must answer the above 3 questions, and this incident must become a new benchmark in terms of defining the limit of bureaucratic powers within Hindu temples and religious/charitable institutions.

The instances of secular government interfering in administrative affairs of Hindu temples that are under their control unlike that of other religious denominations, and riding roughshod over Hindu sentiments while appointing whoever they wish is on the rise, thereby highlighting the need for temple administration being freed from government control.