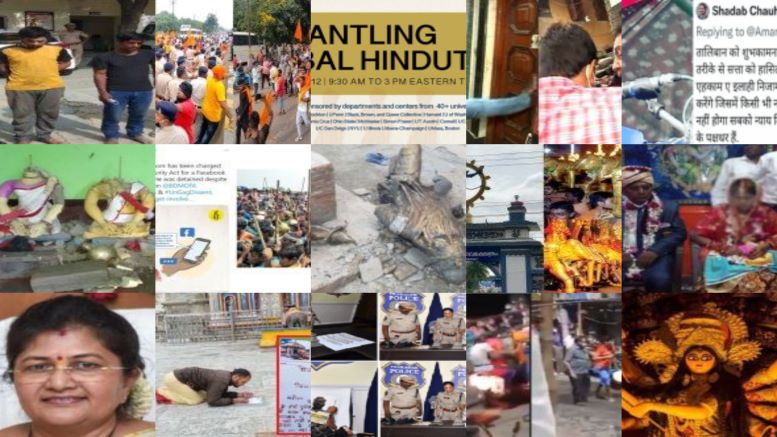 In this weekly summary for the period from 15 August to 21 August 2021, we hope to provide a snapshot of such crimes and hopefully awaken more people around the world to this human rights crisis:

1) Priests of Kedarnath Temple have written to PM Modi calling for abolishing the Devasthanam Board. The tussle between the government on one side and Hindu devotees and priests on the other has been going on for some time now. The protesting priests have warned that they would undertake protests across the state.

2) In yet another case of grooming, Akhtar, who has five children, assumed Hindu identity and became Mukesh to trap a Hindu girl. The incident has come to light from Surat’s Dindoli where the girl realized that she had been cheated three years after marriage. 50-year-old Akhtar Shaikh lured the woman using his fake identity and even attempted to force her into accepting Islam.

3) Odisha government has issued guidelines placing severe restrictions on the celebration of upcoming Hindu festivals. The preposterous restrictions have been announced by the Odisha state government citing the Covid pandemic as an excuse even though infections in the state have been coming down steadily.

4) One person was arrested in Andhra Pradesh’s Prakasam district on Monday after being found in illegal possession of two ancient ‘panchaloha’ (made of five metals) idols and a number of explosives.

5) A theft was reported at Ettumanoor Shiva temple, the epi-center of Shaiva tantra in the Kottayam district of Kerala. The original rudraksha necklace consisting of 81 beads worn by the presiding deity is missing and has been replaced with a 72 beaded one! Each bead is set in two oval plates of gold before being strung to the next bead and those plates are missing too.

6) On Friday, August 13th, police officers of Muchipara police station broke into BJP leader Sajal Ghosh’s residence and detained him. The arrest took place following some uncorroborated allegation of assault of a TMC member’s wife and an alleged attack on a local shop.

7) Shiv Bhakts gathered at Kolkata’s iconic Bhootnath Mandir were brutally thrashed by the police on Monday. The Bhootnath Mandir, located in the Beniatola area of Kolkata, has remained closed citing Covid restrictions even though all major temples in the state have been opened for devotees.

8) UP’s Peace Party congratulates the Taliban on a ‘peaceful’ rise to power in Afghanistan.

9) BJP government in Karnataka is resorting to minority appeasement and has announced medical aid of INR 1 lakh to Muslim women suffering from major health issues. The BJP government has also set aside ₹ 1.74 crores in the current financial year for the same.

10) Temple murtis are being targeted and stolen all across Rajasthan, especially in Jaipur. Police recently apprehended Shehzada Salim alias Dadda in connection with the theft of 7 antique murtis made of Ashtadhatu (octal metal), more than 3 kg of silver ornaments, jewelry, and other valuables from a Shiv and Jain temple in Jaipur, Rajasthan. One Rahul Sindhi, who was buying stolen murtis from Salim, was also taken into custody.

11) On August 3, many tribal families of Bhilai in Chattisgarh were forcibly converted by Christian conversion missionaries in front of the tribal society. The conversion mafia then indulged in blasphemy of Hindu deities. Activists of Vishwa Hindu Parishad and Bajrang Dal resorted to protests and accused these missionaries of harassment.

1) The statue of Maharaja Ranjit Singh Pakistan’s Lahore Fort was vandalized and smashed to pieces by Islamists for the third time since 2019. The incident took place today and the suspect is said to belong to Tehreek-e-Labbaik Pakistan (TLP) party. A video posted on Twitter shows a Muslim man, believed to be a TLP worker, breaking the arm of the statue and then pushing it down thereby breaking it to pieces.

1) Amnesty appears immensely concerned for Mohammad Emon, however, their blaring hypocrisy comes to the fore with their abject silence on the issue of Jhumon Das has also been arrested under the same act in March this year. It has also maintained a convenient silence on the attack on Hindus in Shalla.

2) Within a week of a Ganesha Temple being torn down in Bhong city, Pakistan, a hundred-strong-Muslim mob attacked and plundered at least 10 Hindu temples in Bangladesh’s Khulna district. The incident happened on Saturday, August 7th, after a group of Hindu women devotees had an altercation with an Islamic Imam the previous evening. The mob also looted Hindu homes and ransacked Hindu-owned shops.

1) In response to a virtual conference titled “Dismantling Global Hindutva”, scheduled for September 10–12,  the Hindu American Foundation (HAF) has written to the presidents and key administrators of all 41 universities listed as event co-sponsors, asking them to distance themselves from the event and its partisan and Hinduphobic motives.