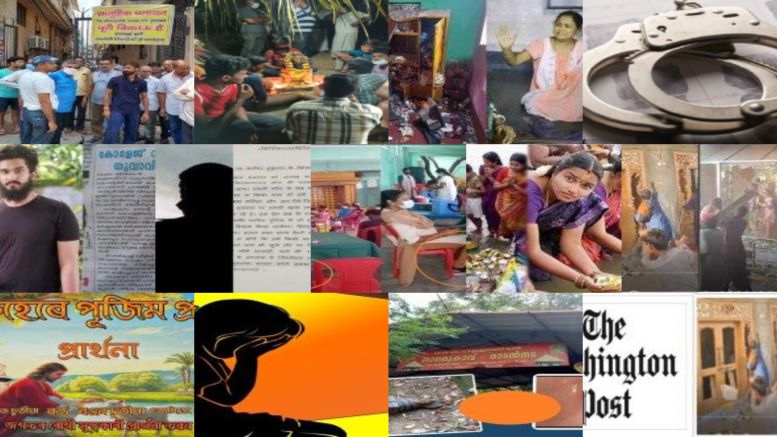 In this weekly summary for the period from 1 August to 7 August 2021, we hope to provide a snapshot of such crimes and hopefully awaken more people around the world to this human rights crisis:

1) Security has been beefed up at the famous Mankameshwar Temple in Lucknow after the temple trust received a letter threatening to blow up the city’s prominent temples and the office of the Rashtriya Swayamsevak Sangh (RSS).

2) The World Healing Prayer Center at Doomordolong, Moran, in Dibrugarh district has become a hotbed of Christian conversion activities in Assam. Recently, a video went viral on social media which showed that Hari Naam-Kirtan of Mahapurush Srimanta Sankardeva and the Assamese Bihu dance was distorted by Ranjan Chutia and his group to convert emotionally naïve Hindus into Christianity.

3) The anti-Hindu DMK government has passed an order to close temples for public darshan ahead of Hindu festivals. Major temples like Thanjavur Brihadeeswara (Big temple), Madurai Meenakshi, Tiruchendur Subramanya Swamy, Ramanathapuram Ramanathaswamy, and many other temples have been closed for devotees for 3 days.

4) A young girl named Varsha Vinod from a Kasaragod-based communist family fell for grooming jihad and absconded with one Younus, s/o RV Yousaf. A few days back, social organization Hindu Aikya Vedi had informed Varsha’s father Vinod that there is a potential for Varsha to convert to Islam, but he ignored the advice. Back then, Vinod was in denial and reportedly even accused the Hindu organization members of spreading ‘hatred & communalism’.

5) Their dream has turned sour for 81 Hindu families of Shiv Mandir colony, Lajpat Nagar, Moradabad, UP. Hindus have been driven to such depths of despair that they are now planning to sell their houses and migrate somewhere else, as per a TV9 Hindi report. They say that life became miserable for them ever since some Muslim anti-socials purchased one house in the colony by paying thrice the market rate. Since then, tactics like throwing meat/bones and other animal waste in front of the Hindu houses are being used to drive them out. The problem became especially unbearable during the Muslim festival of Bakr-Eid where animals like goats, cows, camels, etc are slaughtered in public as a sacrificial offering to Allah.

6) In a horrific incident, a 16-year-old was gang-raped twice with a span of three hours after she left her home following a tiff with family members. The incident took place after midnight in Nagpur and at least half a dozen men are reported to be involved in the gruesome act. Available information indicates that the teenager was first raped at a room belonging to a railway coolie at Timki, and later inside an autorickshaw in front of Indira Gandhi Government Medical College and Hospital (IGGMCH).

7) A 16-year-old Hindu girl was raped, impregnated, threatened to convert, and asked to abort by Naushad from the same village of Jamo in Amethi district, UP.

8) A few days ago, the murtis of the Kaipalliyil Nagarukavu – Madan Nada temple were destroyed and the temple was desecrated by unknown vandals at Navaikulam in the Thiruvananthapuram district of Kerala.

10) A five-year-old girl was raped by a youth in Uttar Pradesh after he lured her with candies. The girl had gone to a shop nearby her house when the suspect standing close by, lured her with candies and took her to a room, following which he raped her. He fled after committing the crime.

11) The incident of a Christian doctor in Tamil Nadu refusing to remove her footwear while sitting inside a temple has woken many slumbering Hindus out of their trance. The doctor was part of the team that administered vaccines in a village in Vellore. Despite people pointing out her mistake the doctor refused to respect Hindus’ beliefs and continued to be adamant about wearing footwear inside the temple.

12) Despite Hindu organizations’ and BJP cadres’ protests a murti of Ganesha was removed from its spot following missionaries’ complaints. A tense situation prevailed in Tiruchengode, Tamil Nadu after BJP and Hindu Munnani cadres were detained by the police. Missionaries are said to have encroached on temple land and are now contesting the installation of Ganesha murti.

1) In a brazen attack on a temple in broad daylight, Islamists vandalized a Hindu temple in Bhong city of Rahimyar Khan district, Punjab province, Pakistan. What is more, in a clear indication of how such Muslim fanatics operate freely in the ‘Naya’ Pakistan of PM Imran Khan, the attackers chose to live telecast their attack on Facebook.

2) Dr. Shankar Malhi, a Hindu was arrested under Blasphemy Laws for asking questions about mass slaughtering on EID-UL-AZAHA. He was hiding, an angry mob attacked Hindu homes, Police arrested his family & tortured them to compel him to surrender.

4) Muhammad Sarfraz & others, entered late at night in the house of a Hindu Roshan Bheel, abducted his 15-year-old daughter Shabana for rape & conversion to Islam. They were sitting outside the police station-Goth Lal Bakhsh, Mirpur Mathelo, Sindh-Pakistan but police were not registering a complaint.

5) Around 150 Hindu families are forced to flee after an angry mob vandalized a temple & attacked their homes in Bhong, Rahimyar Khan, Punjab-Pakistan. Punjab was a Hindu majority province but now Rahimyar Khan is the only city where Hindu exists in sizeable numbers.

1) Hindu persecution and vandalization of Hindu temples are commonplace in the Islamic nations of Pakistan and Bangladesh. Yet, the jaundiced sight of the West has always conveniently overlooked such persecutions. The western media has time and again made its Hinduphobic agenda amply apparent. WaPo (Washington Post) has, however, justified the unjustifiable as it has given its own spin on the Hindu temple attack news.