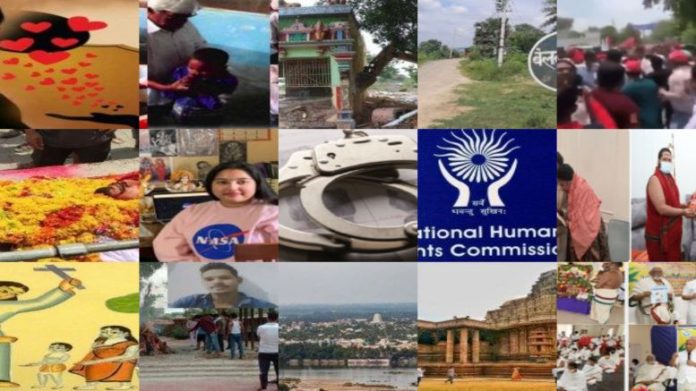 In this weekly summary for the period from 11 July 2021 to 17 July 2021, we hope to provide a snapshot of such crimes and hopefully awaken more people around the world to this human rights crisis:

2) American space agency NASA (National Aeronautics and Space Administration) recently put up images of some of their interns while inviting applications for NASA’s fall internships. The photograph shared by NASA shows Roy with images and murtis of Hindu deities on her desk and wall. Following this, the NASA intern was subject to Hinduphobic attacks by Lutyenites, Islamists, Christian supremacists, and Neo-Ambedkarites whose hatred for Hindu Dharma is well-known.

3) Tirumala Tirupati Devasthanams (TTD) additional executive officer A.V. Dharma Reddy on Monday lamented that ‘Veda Sakhas’ has plummeted from 1,331 to just nine over the years and exhorted that there is a need to safeguard and propagate the ‘Vedas’.

4) A Hindu SC youth named Krishna Valmiki was lynched in Jhalawar of Rajasthan by Muslim goons on the 1st of July. Valmiki from neighboring Jhalrapatan was mobbed by Sagar Qureshi and a dozen others and he succumbed to his injuries on the 6th.

5) Visakha Sri Sarada Peetham seer Swatmanandendra Sarawati on Monday met new Union Culture and Tourism Minister G. Kishan Reddy and explained how the rules and regulations of the Archaeological authorities are deterring the restoration and renovation of many temples in the Telugu states.

6) Three con men targeting luxury car owners have been arrested in Bengaluru and 19 luxury cars valued around Rs 3 crore were seized from them, police said on Wednesday. The three were identified as Naseeb, Mohammed Azam, and Mahir Khan, all residents of Bengaluru.

7) In a major operation against vehicle robbery in Bengaluru, 17 notorious robbers were arrested and 20 cars and 58 bikes recovered from them, police said on Wednesday. According to the police, those country-made pistols and 24 live cartridges were recovered from three criminals – Faizulla, Syed Siraj Ahmed, and Mohammed Ali aka Shera of Banaswadi police limits.

8) A colony of Scheduled Caste Hindus began converting to Christianity following prayer meetings arranged by the evangelicals and within a year the entire colony had turned Christians. According to reports, all 25 families of Hindus in the colony accepted Christianity.

9) Christian evangelical activities in tribal areas are set to come under the scanner with Sukma SP passing orders instructing his subordinates and officers in charge of all the police stations in the district to maintain strict surveillance over the activities of the Christian missionaries and the converted tribals.

10) According to a report in Bangalore Mirror, recently five children were rescued by the Childline from Shalom Biblical Baptist Church ministries situated in the Chikkabellandur area of Bengaluru. The orphanage is not registered and had no permissions to operate. However, the story is much murkier. This organization, a Christian church, runs a Theological Seminary(college to train Christian priests) and also does “outreach” i.e. converts people from the society, apart from the conversion of children in their orphanage. This has been going on at least since 2002 with funding from WORLDWIDE NEW TESTAMENT BAPTIST MISSIONS,  based in North Carolina, USA.

11) A probe has been ordered into a video clip that shows some members in a Samajwadi Party rally raising pro-Pakistan slogans during a protest rally.

12) Karnataka BJP government led by CM Yeddyurappa must clarify its stance on the takeover of Hindu temples in the state.

13) A case of attempted forced conversion has come to light in Chandigarh. A 36-year-old Sikh man has filed a civil case in the Chandigarh district courts and sought orders to restrain his Muslim wife from forcibly converting him and his minor son to Islam. He has alleged the complicity of his in-laws in the whole saga.

14) Kirti Jain from a well-known family in Guna, MP eloped with Waseem as soon as she turned 18. She gave birth to a child but took her own life within three years of marriage. Waseem groomed the girl (when she was a minor) with fancy bikes and trips to exotic locations.

15) In a shocking move 9 temples were demolished in Coimbatore, Tamil Nadu as a part of the Smart City project. The temples were located around a tank and allegedly were built encroaching its bund. Hindus who protested against the demolition drive were arrested by the police.

16) In its final report submitted to the Calcutta High Court, the National Human Rights Commission said that “The situation in the state of West Bengal is a manifestation of ‘Law of Ruler’, instead of ‘Rule of Law’.” The commission also made it clear that the violent incidents in the state reflect the appalling apathy of the state government towards the plight of victims.

Christians up in arms over ‘inter-faith marriage’ in Palakkad, Kerala