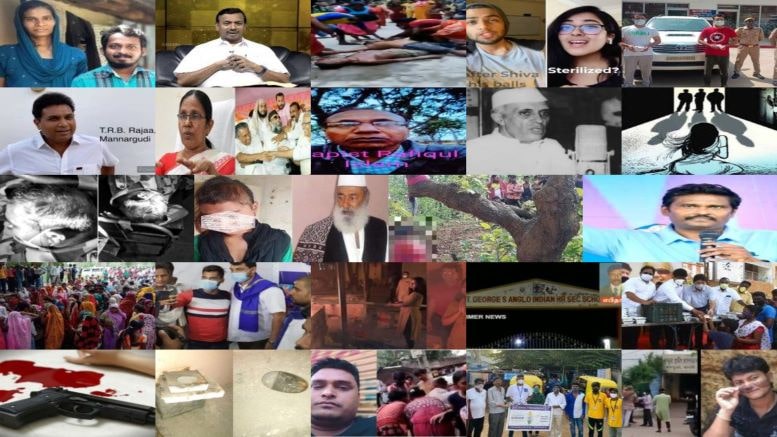 In this weekly summary for the period from 6 June 2021 to 13 June 2021, we hope to provide a snapshot of such crimes and hopefully awaken more people around the world to this human rights crisis:

1) A temple in Uttar Pradesh has been attacked and the Shivling was broken by Muslims. Hindus who are a minority in the village are said to be in fear of more such attacks following the incident. The incident happened in Alampur village in Saharanpur, UP on June 5.

2) Poonam Rajbhar the daughter-in-law of the former Sarpanch of Ishakpur village in Azamgarh, UP was shot dead inside her house by a political rival last month. Other family members too were injured and they remain hospitalized in critical condition. The killers were supporters of one Faiz, who had backed a Muslim woman Salma to win the recent panchayat elections.

3) Mohan.C.Lazarus, evangelist and founder of Jesus Redeems NGO, had called for the conversion of 6 lakh Hindus. The preacher had earlier made many derogatory comments about Hindu Dharma and deities and had to apologize for one such comment.

4) In yet another proof of how the Christian conversion mafia has been creating a rift between Hindu families, reports have emerged of a Christian convert son refusing to cremate his Hindu mother. Dharam Pratap Singh who became David after conversion reportedly wanted to bury his mother Saroj Devi and refused to cremate her as per Hindu customs even though his mother had not accepted Christianity.

5) Yet another BJP worker has been murdered in West Bengal. Jayprakash Yadav was killed near his home and three others, including his mother, critically injured when bike-borne goons hurled crude bombs in Bhatpara of North 24-Parganas district.

6) Transborder cattle smugglers have assaulted Border Security Force (BSF) personnel along the Bharat-Bangladesh border, resulting in an injury of personnel, the border guarding force said on Sunday. The incident took place around 11.25 a.m. on Saturday in Dakshin Dinajpur district in West Bengal when the BSF troops on duty detected movement of 8-10 cattle smugglers along with cattle coming from Bharatiya side along the bank of Chhoti Jamuna river with an intent to cross the cattle towards Bangladesh side.

7) Despite vigorously campaigning that DMK is not an anti-Hindu party, DMK leaders continue to show their Hindu hatred after coming to power. DMK MP Dayanidhi Maran and MLA of Thousand Lights constituency in Chennai were seen distributing mutton and chicken biryani in front of a temple which has sparked outrage.

8) KK Shailaja, ex health minister of Kerala and the ‘rockstar’ of the left-liberal media worldwide, has come up with incredible thoughts that display Communist bigotry and intolerance when it comes to Hindu Dharma. She recently ranted on the floor of the assembly that the ‘soft Hindutva’ policies of the Congress party have led to the ruin of Bharat! The instances provided to substantiate her theories were even more perverse.

9) The deep-seated hatred that Nehru harbored towards Hindu Dharma is apparent in his March 1959 speech at the seminar on architecture organized by New Delhi’s Lalit Kala Academy. Speaking on that occasion PM Jawaharlal Nehru held that he found temples oppressive while adding that the Taj Mahal was a delight to the eye and spirit.

10) Instagram has been giving a free pass to Hinduphobic content creators. Recently, a viral video on Social Media (SM) by two Hyderabad-based Instagrammers had extremely objectionable content insulting Bhagwan Shiva. The content was posted in the Instagram account Youek.in where the two were seen saying that Bhagwan Mahadev castrated Himself and added that people shouldn’t get offended with their video.

11) A minor girl (9) has been allegedly raped by a 60-year-old school teacher Rafiqul Islam in Malda, West Bengal, as per human rights activist Devdutta Maji. The crime occurred on 5 June. The parents of the little girl don’t have much hope from local police, which is known to drag its feet in crimes where the accused belong to the minority community. Shri Maji’s organization SinghaBahini is supporting the victim’s family, who belong to a Scheduled Caste community, in their fight for justice.

12) An altercation over payment dues of just Rs. 2000 led to the killing of Sushil (38) from Garwarkheda village near Unnao, UP at the hands of Shafiq and his accomplices from neighboring Thana village. The accused beat up the victim and his relatives, and many were injured following which they were admitted to the hospital. Unfortunately, Sushil died on the night of June 5th following which the police arrested three including Shafiq.

13) A complaint has been lodged with the Union Home Ministry against PV Sunil Kumar, Additional DG of AP Crime Investigation Department (CID) for indulging in hate speech against Hindus and RSS (Rashtriya Swayamsevak Sangh)  and indulging in divisive communal and caste-based politics.

14) A doctor was brutally assaulted by the family members of a patient by the name Sheikh Ismail following the latter’s death on 9 June at Pandua Rural Hospital in West Bengal’s Hooghly district.

15) Four men gang-raped a 15-year-old Hindu girl after she refused to convert to Islam to marry one of them. The crime came to light when the minor girl got pregnant and gave premature birth to an infant who died in hospital.

16) Covid-19 has brought out many Hindu haters, even HINOs, who think Hindus do no charity and are all praise for missionary organizations despite the fact that they do ‘charity in exchange for ‘conversion’. Then they glorified langar and questioned what Hindu organizations have done for society. But when one organization that proudly proclaims itself to be Hindu, did exemplary relief work, they couldn’t believe it and have started discrediting the organization. Sewa International (SI), the charity arm of Hindu Swayamsevak Sangh (HSS) has been the target of the liberal mafia and Breaking India forces since the 2000s. It has gained momentum again after Twitter CEO Jack Dorsey donated $2.5 million for SI as a part of $15 million earmarked for Covid-19 relief in Bharat. Attempts to tarnish the image of SI and discourage overseas Bharatiyas from donating to the organization are made again and the article that appeared in Slate is a part of it.

17) Just before midnight on 25 May, Dr. Sandeep Jaiswal, a doctor from Lucknow UP, was shot at from close range and severely injured. He is in the hospital where his situation remains critical. The accused brothers named Amir and Rashid were caught on CCTV fleeing the scene following which the police detained the duo.

18) The body of a 16-year-old girl, the daughter of a local BJP leader,  was found suspended from a tree in Jharkhand’s Palamu district on Wednesday. The girl’s right eye was gouged out before she was killed. Her family has alleged that she was gang-raped before being murdered.

19) An elected representative of DMK has used the ‘cow-piss drinker’ jibe against the people of Uttar Pradesh so casually. The jibe used by the Pulwama terrorist, Adil Ahmad Dhar, as a justification to kill ‘kafirs’ is used by anti-Hindus, Breaking India forces, and practically everyone opposed to Hindu rights. An elected representative of a party that vociferously repeated that it is not anti-Hindu, using such a phrase has come as a shock.

20) Hindus continue to suffer the aftermath of voting for BJP (Bharatiya Janata Party) more than a month after the Bengal Assembly elections were declared. The violence has continued unabated to date and reports have now emerged of BJP votes being brutally assaulted in booth No. 67’s locality under Bongaon Dakshin AC where BJP won. In yet another incident at Tiljala, a Shani Kali Mandir was attacked in broad daylight on 8 June by Islamists who vandalized the temple and destroyed the murtis. A similar call for help was made by Singha Bahini President Devdutta Maji who tweeted saying that Hindus in Hazarigali were surrounded by Islamists and also alleged that the police were not just refusing to act against the attackers but also trying to frame Hindu youths.

21) In a weird case, a Kerala Muslim man had hidden a Hindu girl in a room for 11 years. Rahman, a 34-year-old electrician from Palakkad had locked his ‘lover’ Sajitha, a 28-year-old woman, inside his room without anyone knowing for 11 long years.

22) A Bhim Army worker identified as Dipu Kumar is alleged to have threatened to rape women and massacre people belonging to a certain class of the society. Kumar is said to have called Azad Sena Organization founder Abhishek Azad on the night of 8 June when he issued the threats and also abused Azad.

23) While the mudslinging on Hindu-run educational institutions is continuing, attempts to hush up sexual abuse in a Christian school in Chennai are being made. A politician of DMK’s ally Viduthalai Chiruthaigal Party (VCK) has been accused of threatening the victim’s lawyer in support of the Christian Physical Education teacher.

1) Abduction, rape, sex slavery, and conversion of minor Hindu girls continues unabated in Pakistan. Like sex slavery, age too seems of little importance under Pakistan’s sharia-inspired laws. Socially, Hindus are so dehumanized in Pakistani society that they can no longer exert any political pressure amongst the ruling class/military, the courts, or even the local police.

2) A Hindu Girl Mumal Daughter of Neem Bheel from New Dhumbalo in Sindh converted to Islam and married Amir Ali in Samaro.

2) A Hindu boy was hanged to death at Nasirnagar P.S, Bhramanbaria district on 8 June.

4) Muslims Terrorists brutally hacked to death Rabindra Chandra Das, a member of Hatia Upazila Awami League of Noakhali district who was a three-time elected member of Ward 03 of Charashwar Union. The Hindu Mahajot is demanding swift arrest of the killers and maximum execution.