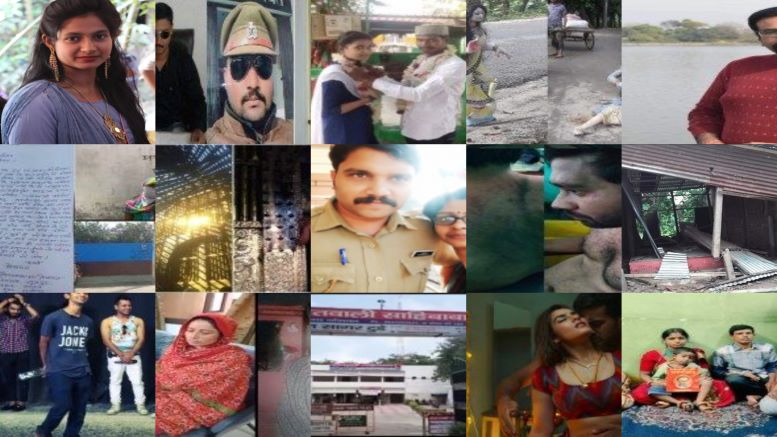 In this weekly summary for the period from 30 May 2021 to 5 June 2021, we hope to provide a snapshot of such crimes and hopefully awaken more people around the world to this human rights crisis:

1) Staff at Jamalpur primary health center in Aligarh, UP found Niha Khan, an Auxiliary nurse-midwife (ANW) injecting empty needles and throwing away the loaded syringes without administering the vaccine.

2) A former journalist with leading Malayalam news channels has alleged that she and her family were targeted by the CPI-M “cyberbullies” and her policeman husband was subjected to “moral policing”. Speaking to IANS, Vineetha contended that the CPI-M and its cadres have been targeting her ever since she reported on the brutal murder of Youth Congress worker, Shuhaib who was attacked by a group who are allegedly CPI-M men on February 12, 2018, and died the next day.

3) Hindu Dalits are being driven out of Muslim-majority pockets in the villages near Aligarh, UP. There is alleged collusion between the Muslim perpetrators of these atrocities against Dalits and the local police, who remain silent when such cases are registered.

4) Hindus in Muslim majority areas are faced with an existential crisis and are forced to flee from such places. In mid-May, Sanjay Colony in Arthala located in Ghaziabad’s Sahibabad was attacked by a mob of Muslims including Councillor Dilshad Malik.

5) After widespread outrage against using a famous Thyagaraja Kriti in a Telugu film in an objectionable manner, the film crew has apologized and agreed to remove the Kirti. Recently, Ek Mini Katha, a Telugu adult comedy film directed by a debutant director Kartik Rapolu, was released on Amazon Prime. When the teaser was released many Carnatic music enthusiasts noticed that a famous Kirti of Tyagaraja swami, Entho Muttho, was used for a very objectionable intimate scene. In the Kriti “Entha Muddo Entha Sogaso”, Thyagaraja sings about the indescribable beauty of Shri Rama and how people who are chained by worldly lust cannot see his true form.

6) A thrice-married Muslim man named Abid Hawri was arrested by UP Police after a Hindu lady came forward accusing him of hiding his identity and entrapping her for marriage, in a case of grooming jihad. He was arrested from his house in Sushant Golf City, Lucknow on Sunday morning.

7) The Mulsim mob that mercilessly attacked a doctor posted on Covid-19 duty has been arrested by the Assam police after the video of the incident went viral on social media. On June 1st a shocking video of a mob mercilessly beating a doctor in Assam was shared by a social media user tagging the CM. The CM took note of it and immediately directed the Assam police and special DGP Gyan Pratap Singh to find the culprits. Within 12 hours of the issue coming to light, police arrested 24 people involved in mob violence against Dr.Seuj Kumar Senapati posted in Udali Covid Care Centre, Hojai.

8) Yet another shocking and painful episode from the ongoing state-sponsored pogrom against Hindu workers and supporters of BJP has come to light from West Bengal. Manju Pramanik, the wife of BJP Mandal president Sukanta Pramanik, who belongs to an OBC Hindu community, resides in Falta police station area, South 24 Parganas district, narrated how her husband was arrested by police in the middle of the night, beaten, and tortured in custody, with police asking her to meet with a notorious Muslim goon Jahangir linked to the ruling TMC to ‘settle’ the matter.

9) Police sources said three unidentified terrorists fired upon BJP municipal councillor, Rakesh Pandita when he was visiting his friend at Tral Payeen. Pandita succumbed to his injuries whereas the daughter of his friend is seriously wounded.

10) A 5-year-old shocking and troubling video recently surfaced online. It instantly flooded social media for its blatant Hindu hate and expletives directed at sacred Hindu icons. The video contains raw footage of a ‘rap battle’ from 2016 in which Aditya Tiwari, recognized by the stage name MC Kode, could be seen reciting a rap replete with expletives. The video was filmed at BITS Pilani.

11) In the midst of the pandemic, the fire accident in the famous Mandaikadu Bhagavathi Amman temple has left the Sanatani Hindus of Tamil Nadu in shock. The temple is known as the Sabarimala of women as women go there on a pilgrimage after 40 days of fasting. The roof of the temple is said to have caught fire after the usual morning puja.

12) Sravanti, a 19-year-old Hindu woman, converted to Islam and married Salman in January of this year. The ‘inter-faith’ marriage did not last long and her body was found hanging from a ceiling on the 24th of May. Her parents and relatives allege foul play.

13) Having done nothing since the past two and a half years of rule in Rajasthan, the Congress government goes back to what it does best. Minority appeasement using petty moves. Their latest move banning the use of loudspeakers in Hindu temples while allowing them in Mosques has not gone down well with locals and the local MLA admitted that there is deep discontent within the public.

1) The issue of abduction, rape, forced conversion, and marriage of a Hindu girl named Reena Meghwar, has now led to her family being assaulted and threatened for pursuing her recovery and an attempt to kidnap an eight-year-old cousin of Reena named Jyoti.

2) Hindu human rights activist Gardhari Lal, younger brother of Vishram Kacchi was attacked by a group of people on 27 May & has been severely injured.

1) There is a sudden spurt in the crimes targeting Hindus and temples in Bangladesh. On June 2nd, a Bhajan going on at Shri Radha Krishna temple in Daulatpur of Narasingdi District was forcibly prevented by Islamists. Local Hindus engaged in singing the praise of Bhagwan Krishna were thrashed, vigrahas demolished, and thrown away. The local Hindus had been warned and threatened over the years to stop the Kirtan (singing Hindu devotional songs) and this attack happened since they didn’t comply with the Islamist demand.

2) On May 30th two Hindu temples were attacked, murtis desecrated and tossed on the road. In the first incident, the Kali Maa temple in Agamara village in Rajbari district was vandalized and the murti was abandoned on the road. The same day, late at night, another group attacked the Saraswati temple in Bhaktapur village. The miscreants ripped the deity out of the temple and threw it on the road. There are allegations that both these incidents were part of a conspiracy plan.