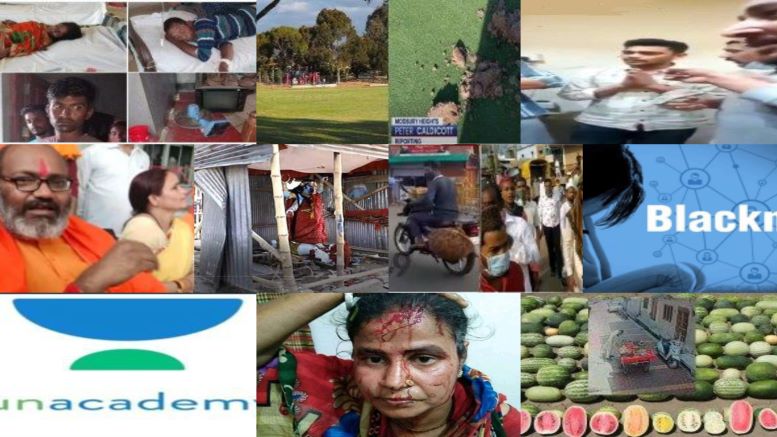 In this weekly summary for the period from 16 May 2021 to 22 May 2021, we hope to provide a snapshot of such crimes and hopefully awaken more people around the world to this human rights crisis:

1) Cops were chased away from a mosque after being beaten up in Bagalkot of Karnataka by Muslims praying at the local Mosque on Eid. The Islamists were not socially distancing and were bunched together without wearing masks while praying. When the police arrived to dissuade them they turned aggressive and a crowd chased the cops away. A steady rise in the number of cases has made Karnataka go for a lockdown curfew from April 28th till the 24th of May.

2) The Crime Branch of Pune City arrested 19-year-old Afsar Aslam Ali on Saturday for allegedly murdering a 65-year-old Hindu woman. Ali allegedly killed Shahbai Arun Shelar, a resident of Ram Nagar in Warje Malwadi, who was murdered on the intervening night of May 7 and May 8. Her body was found at around 5 am on Saturday in a tin shed behind the vegetable market on NDA Road in Warje.

3) An assassination bid on Dasna Temple head priest Swami Yati Narsinghanand Saraswati has been foiled by the Delhi police. As per reports, the arrest of a 24-year-old Jaish-e-Mohammad (JeM) terrorist identified as Mohammad Dar alias Jahangir, from a hotel in Delhi’s Paharganj led to the unearthing of the assassination plot. The Hindu priest has been on the Islamist hit list for some time now.

4) A 21-year-old man, Mohammed Amir, was arrested for extorting money from a girl by threatening to make her nude video viral on social media, police said on Tuesday. The accused has been arrested from Nehtaur village of Bijnor district in Uttar Pradesh after the 13-year-old girl’s father complained at the Alipur police station in Delhi.

5) A shocking video of a bunch of goons forcing a Hindu man to apologize for allegedly supporting Israel and making ‘anti-Muslim’ comments on Facebook and has come to light from Kuwait. The goons can be seen self-identifying as ‘Indian Muslims’ in the video.

6) A fruit vendor Mohammad Farman has been arrested by the UP police for cutting open watermelons, spitting on them, and then selling them to customers. He was caught on camera while indulging in this inhuman act, that too during the time of a pandemic.

7) Online education portal Unacademy was caught promoting Hinduphobia yet again when a Twitter user posted a screenshot of the academy’s mock test papers promoting an anti-Hindu narrative. The Tweet was posted by Prakhar Bansal who pointed out how questions projecting Hindu Dharma in a bad light were being promoted by Unacademy.

8) The Mangaluru police on Saturday arrested a man for making derogatory comments on Hindu deities on social media. According to the reports, Ullal police arrested 25-year-old Swaliz Iqbal for abusing Hindu deities. Iqbal had uploaded the abusive video on social media. The arrested accused, Swaliz Iqbal, is a resident of the Smart City residential complex in Thokottu. The police acted on the culprit after several Hindus registered a complaint against Iqbal over his derogatory video. Hindu organizations had approached the police after the video and audio clips went viral on the internet.

9) Two kilograms of minced beef were found dumped on a cricket pitch at Modbury Heights in Adelaide, South Australia in a hate crime targeting Hindus who played on weekends at the community ground. As per local media reports, a Hindu group used to play cricket at Hargrave Reserve Pitch every weekend which apparently upset some local residents who think the Hindu Indian migrant players have ‘taken over their playground’. The meat was found dumped on the community cricket pitch last weekend when Hindu players reached to commence their match.

1) There is No Place for Non-Muslims in the Islamic Republic of Pakistan even after their death. Wife of a Hindu Bir Bal Raam not allowed to be buried in Hindu graveyard. It was said that the nearby villages will be cursed.  The incident occurred on15 May in Kotla Musa khan, Ahmad-Pur Sharqi, Bahawalpur, Punjab. There is no dignity in death for Hindus in the Islamic nation.

2) A few days ago a Hindu girl, Rina Meghwar was abducted for rape & conversion to Islam from Karyo Ghanor Sindh-Pakistan. She tried to escape but failed. Today (May 17) her family is beaten & threatened for pursuing her recovery. They say police or no one is helping us.

3) It has been 2 weeks now when a 14-year-old Hindu girl Saweran Bheel was abducted for rape & conversion to Islam, family was beaten by armed men in Kunri, Umarkot Sindh-Pakistan. They say that they have requested to police, court & politicians but no one is ready to help

4) A 10-year-old Hindu girl is sold for 30000 Pakistani Rupee (195 USD) near Badin, Sindh. The newspaper Sindh Express says that there are various groups who are involved in the sex slavery business around the country with Impunity.

5) A minor Hindu girl Kousar, daughter of  Shankar Lal, was abducted from Mirpur Mathelo. Her family found her but a video has surfaced showing that the girl has been retained by extremist Islamist cleric Mian Javed of Burjhundi, Ghotki-Sindh.

1) Land Jihad, abduction, forced conversion, and other atrocities on Hindus mark Ramzan in Bangladesh. The persecution of Hindus in Bangladesh in various forms continued throughout the month.

2) A Hindu family was brutally attacked by Muslims on May 16 in the Galachipa P.S. Patuakhali district.

3) 47 Hindu families lived at Kakrachara, Judi, Khulaura P.S. Moulavibazar District but only now 17 families exist there. Hindus owned more than 150 acres of land which has now been reduced to 50 acres, 100 acres of land were grabbed by Land Jihadists.

4) A Hindu temple was vandalized and murtis of Hindu deities were desecrated by Mohammad Imtiaz Ahmed Sohel and others on May 20 at Chakla Para in Jhenaidah Sadar P.S.

5)  Mohammad Atar Ali and his men brutally attacked a Hindu businesses man. Hindu women were also humiliated by Muslims. Hindus were Injured in the attack that took place on May 21 at Bhoyarchar, Tangri, Hatiya P.S. Noakhali district.