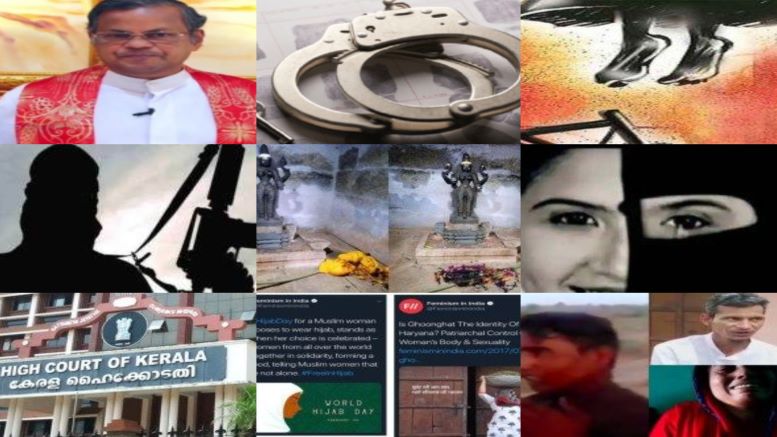 In this weekly summary for the period from 25 July 2021 to 31 July 2021, we hope to provide a snapshot of such crimes and hopefully awaken more people around the world to this human rights crisis:

2) The Kerala High Court forced a penalty of Rs 25,000 on the Ernakulam-based Hindu Sevakendram, and dismissed their petition that asked why reservations meant for socially backward Hindus are being snatched by communities that they felt are no longer backward. The Hindu organization wanted our rulers to declare that Muslims, Latin Catholics, Christian Nadars, and Hindu Scheduled Castes converted to any denomination in Christianity should not be entitled to be treated as backward classes. The court directed the Sevakendram to transfer the amount within a month to a bank account created for providing financial aid to children in the state suffering from rare diseases.

3) Feminism in Bharat today has almost nothing to do with the upliftment or welfare of women. In the hands of leftist entities, feminism has now been relegated into yet another mode of damning and defaming Hindu Dharma and discouraging women from practicing the same. Websites like “She the people”, “Feminism in India”, or Yahoo’s “Makers India” have surfaced as champions of churning out Hinduphobic content in the garb of feminism. “Feminism in India” goes a notch up by promoting Islam simultaneously.

4) A Hindu minor girl was rescued last Friday from four Muslim men from Haridwar in Dwarahat town of Almora district. Due to the alert hotel owner, members of Hindutva organizations reached the place, and police were called. After a ruckus, the police had to file a case against the youth.

5) In an absolutely unbelievable turn of events, the deities of the 1,500-year-old Panchalingeshwara temple in Ranipet, Tamil Nadu were defiled by miscreants in Ranipet, Tamil Nadu. The murtis of Amman and Durga were found in a disrobed state with semen ejaculated on them. The incident is repeated for the third time has caused widespread outrage against police inaction.

6) The arrest of three Jamaat-ul-Mujahideen Bangladesh (JMB) terrorists from Haridevpur in South Kolkata followed by several arrests and their subsequent interrogation has led the police to believe that the militants coming from or through Bangladesh are not following the traditional patterns of operation. They are adopting new methods and mechanisms which are helping them to avoid security surveillance and expand their organization. Terrorists are using Hindu names to get married to Hindu women and recruit more.

7) A case of forced conversion that came to light yesterday, has shocked Uttarakhand. A young Hindu man who was a resident of Uttarakhand was forcibly converted to Islam in Rajasthan.

8) Ten policemen in Uttar Pradesh’s Baghpat have been relieved of their duties after a 22-year-old man – the son of a local RSS leader — allegedly ended his life by hanging when his mother was roughed up and their house ransacked by police, following a brawl at a Covid vaccination camp in the district, officials said on Tuesday.

9) The National Investigation Agency (NIA) said on Wednesday that it has arrested Malik Noor Mohammad Fayyaz, a key conspirator in the killing of the Parihar brothers of Kishtwar in Jammu and Kashmir.

1) Reena Meghwar, a Hindu girl abducted for rape & conversion to Islam just before her marriage by Muhammad Qasim & others from Karyo Ghanor, Badin Sindh. She escaped but was caught. She has escaped again, but she & her family are in danger. As a leaving Islam is punishable by death.

2) Muhammad Abdul Salam, get a helpless Hindu boy, called Hindus filthy creatures, forced him to abuse his Gods & chant ALLAHU AKBAR. This kind of insult is a common thing against non-Muslims in the Islamic Republic of Pakistan. The culprit works at Thar Coal Project, Tharparker, Sindh.
Most hate crimes are driven by anti-Hindu bigotry encoded in certain religious teachings and political ideologies. While the anti-Hindu hate in Islamic countries is obvious, there is another subtler form of anti-Hindu sentiment within institutions and the public sphere of ostensibly secular states (like India) that provides an enabling environment for Hinduphobia and hate crimes. This subtle, everyday discrimination can be missed unless one studies prevailing laws and patterns. The gradual ban on firecrackers during Diwali is a good example – it might seem pollution-related on the surface, but the double standards at play become clear when one looks at the larger picture of restrictions on Hindu festivals, and the lack of sound reasoning behind the ban.
We request all readers to share other anti-Hindu hate crimes that we might have missed in this period in the comments below or by dropping an email to [email protected]. We also solicit support in the maintenance of the Hindu human rights tracker database started by us.