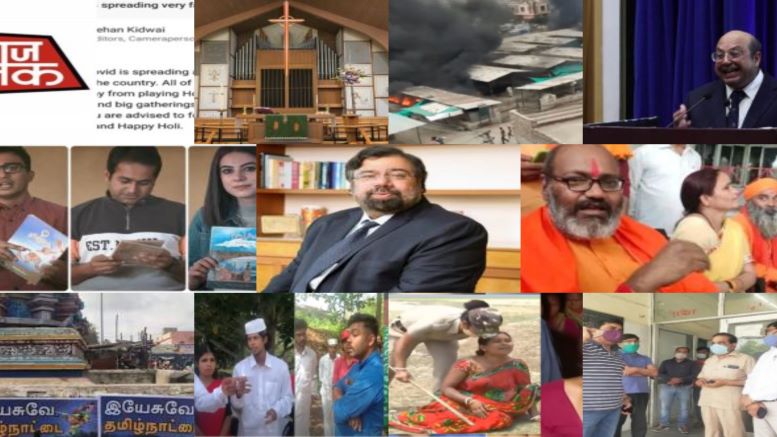 In this weekly summary for the period from 11 April 2021 to 17 April 2021, we hope to provide a snapshot of such crimes and hopefully awaken more people around the world to this human rights crisis:

1) On Saturday 10 April 2021, as West Bengal stepped into the fourth phase of elections, visuals of violence have been rushing in from all directions. In an appalling incident that took place in the Zorpatki area of ​​Sitalkuchi constituency in Cooch Behar district, an infant was snatched from a Hindu mother’s arms inside the voting booth right before she could cast her vote.

2) The Rajasthan riots started with a small dispute. On Saturday evening, a local named Kamal Singh was buying grapes at the thela when he got into a dispute with 5 young men from a ‘certain community’. The youth showed their prowess with a knife and stabbed him then and there. The police were informed and after some time arrested three of the accused named Fareed, Abid, and Sameer. However, the main accused remained at large.

3) A Hindu patient was brutally beaten to death by a fellow Muslim patient over a trivial misunderstanding in a hospital in West UP’s Shahjahanpur district. The quarrel began when accused Abdul Rehman asked fellow patient Hansram to vacate a bed. As Hansram refused, Abdul started beating him. By the time the hospital staff arrived, Hansram was dead.

4) A bunch of new filmmakers allegedly paid local CPM goons for renting out the Vayilyamkunnu temple near Kadampazhippuram in the Palakkad district of Kerala, for filming. The filmmakers named Aashique, Shinu, and Salman were shooting a movie allegedly promoting grooming jihad (aka Love Jihad) wherein a Hindu girl falls in love with a Muslim man.

5) In a chilling reminder of the Kamlesh Tiwari episode, Islamists have threatened to behead Dasna Mandir Mahant Swami Yati Narsinghanand for his alleged comment criticizing Prophet Mohammad. Lakhs of Islamists including children recently gathered at Bareilly asking for the Mahant to be beheaded.

6) Harsh Goenka, Chairman of RPG Group, displayed his Hindumisia (Hindudvesh) yet again when he put out a now-deleted tweet mocking Hindu Dharma and its traditions using the ongoing Kumbh Mela. Goenka’s tweet carried pictures of Sadhus in loin clothes on the occasion of the holy bath and read “Meanwhile at the #KumbhMela the international press is appalled at how low we wear our masks.”

7) Mysterious posters saying “Bless Tamil Nadu Jesus” cropped up in every part of Tamilnadu a few days back. Some were even pasted on the compound wall of a temple and inside the temple near Nandi murti. Many criticized such fanaticism by missionaries saying perhaps they feel emboldened as DMK is predicted to come back to power by sweeping the 2021 assembly elections.

8) Pastor Balwinder Singh of Jalandhar has been accused by a Hindu family from Mumbai of fraudulently converting them to Christianity under the pretext of healing their daughter who was a cancer patient and also duping them of INR 80,000. As per reports, Shubham Pandit and his mother went to Jalandhar to meet Pastor Balwinder in a bid to cure Pandit’s sister of cancer and the Pastor forcibly converted their religion as well.

9) A recent message published on the Bhadas4Media website, which tracks the issues related to media in Bharat, has claimed that the bosses at the India Today group regularly display their Hinduphobia. The anonymous media person has sent the following screenshot of the mail sent on the occasion of Holi by Rehan Kidwai, who is the Sr. Vice President-Production at Aajtak News Channel.

10) Supreme Court Justice Rohinton Nariman has landed in a major controversy by making a highly objectionable comment about the Rig Veda during a lecture on the topic “Great Women of History” for the 26th Justice Sunanda Bhandare Memorial Lecture today. The event was broadcast live on Facebook by legal news website Bar & Bench.

1) A documentary by BBC Urdu shows how Hindudvesh/Hindumisia is being officially sanctioned by the Pakistani government through its school textbooks. A video of the documentary has gone viral on social media (SM) where the inherent bias against Hindus has been revealed by Pakistani Hindus who narrated their ordeal detailing how they had been humiliated by their friends, colleagues, and classmates simply because they were Hindus by faith. School-going children are being indoctrinated through state-sanctioned textbooks that demonize Hindus by calling them Kafirs (derogatory slang for non-believers) and saying that all evils that have fallen upon Pakistan are due to the Pakistani Hindus.

2) A Hindu girl Sita Kohli was abducted on April 13 from Village Walji Kohli, Tando Ghulām Ali, Sindh, Pakistan. The case is still in the police station and Hindus are pleading for help but there is no one to help them.

5) Homes of Hindus were attacked and a Hindu temple was plundered as well as murtis were vandalized by local Muslims at Shyamnagar P.S, Shatkira district on April 13. More than 12 innocent Hindus were injured in the attack.

8) Homes of Hindus were attacked and more than 8 innocent Hindus were injured by Mohammad Kasim Mia, Lat Mia, Musa Mia, and other members of their gang at Taharpur P.S, S Sunamganj district.