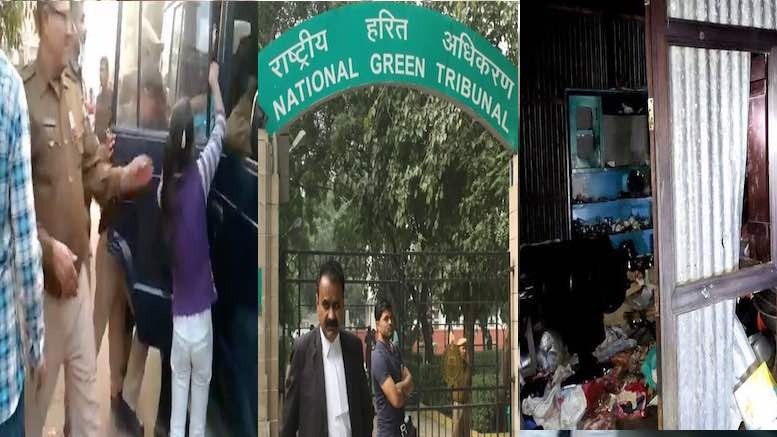 Attacks on Hindus and Hindu Dharma, both in Bharat and overseas, are frequent and unrelenting. In many regions of the world this persecution is like a genocide slowly unfolding before our eyes. For decades, the true depth and breadth of these attacks, driven by disturbing anti-Hindu bigotry, have been ignored by the world. From murders, sexual violence, forced conversions, land grab, assault on festivals, desecration of temples and murtis, hate speech, to institutionalised & legal discrimination, Hindus are facing an increasing assault on their very existence along with an unprecedented Hindu hatred.

In this weekly summary, we hope to provide a snapshot of such crimes and hopefully awaken more people around the world to this human rights crisis:

1) Chhath Puja which is one of the long-standing tradition of worshipping Surya Dev (Sun) was severely restricted  this year by the Calcutta High Court to maintain ‘social distancing’ during Covid-19 pandemic. This is nothing but a direct attack on Hindu traditions as political meetings and Eid processions are allowed to go on unabated without restrictions.

2) Businessman Vinay Gupta and his wife Neha Gupta were brutally murdered by their employee Amaan Hyat Khan on the eve of Karwachauth.

3) Hindu roadside Diya vendor Rakesh, his wife, and daughter were mercilessly beaten up by Haji Shajad, Haji Gulam Rasool, and their friends as they had set up a temporary stall to sell earthen lamps and posters in the run-up to Deepawali. Rasool and others even threw away Rakesh’s wares.

4) A minor Hindu girl was kidnapped, raped, and enslaved for six months in a brick kiln in Uttar Pradesh by one Shaqib who even forced the 15-year-old to do labor work. Shaqib was caught by the police on the Delhi-Dehradun highway when he was attempting to flee to Delhi.

5) While several states banned the sale of crackers thereby affecting the Deepawali celebrations as well as livelihoods of the predominantly Hindu cracker manufacturers and sellers, the police were treating those involved in the use and sale of crackers like terrorists or even worse. The state machinery has been extremely insensitive and there were numerous reports of roadside cracker vendors being arrested across the country.

6) The Rajasthan Government has banned the Pushkar Fair in Ajmer this year citing the Chinese Virus pandemic situation as an excuse. Again, contrast this with how Eid festivities and Muharram processions were allowed to go on, and election rallies were allowed earlier this year.

7) A Muslim man Lukman along with his brothers Arman, Noman, and friend Shamshad murdered his live-in partner Neha Patel after a tiff broke out between the two as she wanted to end the relationship. Lukman is on the run while the other three have been arrested.

8) A Hindu Dalit girl was brutally assaulted in front of her minor brother by a Muslim suitor Hajrat Khan whom she turned down in Majhiaon’s Lakadhi village when the girl was alone at home. She was to get married later this month. She has been admitted to the Garhwa hospital where she is in critical condition after receiving severe head injuries.

9) As if the ban on Chhath Puja, Deepawali crackers, and temporary Diya stalls was not enough, the Puri administration has banned the Kaunriya Kathi ritual at Shri Jagannatha Mandir during Deepawali this year. The pandemic has become an easy excuse for secular governments to attack Hindu rituals. The Kaunriya Kathi is yet another Hindu ritual is facing the axe from government authorities, ostensibly to ‘control air pollution’ to combat the Covid-19 pandemic.

10) The National Green Tribunal (NGT) has launched an all-out attack on Hindu festivals using the smoke-screen of pollution (air, noise, water). After getting several states to successfully ban crackers till 30 November (will air quality magically improve from December onwards?), the administrative machinery under NGT directives has also allegedly started targeting poor Diya manufacturers stating that the kilns used in the process of Diya-manufacturing cause pollution.

11) A Muslim woman belonging to Uttar Pradesh’s Gonda district has been accused by a 29-year-old Hindu man of faking her identity, trapping him in her love affair, and forcing him to convert to Islam post-marriage reports Dainik Jagran. The man has registered a complaint in this regard with the Deputy Police Commissioner’s office in New Delhi’s Rohini sector.

12) A house belonging to a Hindu family was vandalized in Brahmanbaria, Bangladesh and valuables looted following a Facebook post that allegedly defamed Islam. Victim Balai Das and his family members are currently living elsewhere fearing they could be attacked again. This incident comes after torching of many Hindu houses at the Korbanpur village under Muradnagar upazila in Comilla on November 1.

13) Father of 15-year-Old Hindu girl Najo D/O Samtu Kohli who was abducted by Saddam Hussein 2 months ago for child rape and conversion to Islam has appealed in district court Mirpurkhas, Sindh, Pakistan for return of his daughter.

14) 10-year-old Hindu child Jiv Raaj S/O Ghaseeto Bheel, who was working as bonded labour on the land of Ishaq Memon in Samaro, Sindh, Pakistan had high fever but died after the owner refused to give money or leave for his treatment.

15) A Hindu man appealed for help from PM Modi after his sister Simran was kidnapped, forcibly converted to Islam and married off in Mirpur Mathelo, Sindh, Pakistan.

16) Murtis of Maa Durga, Saraswati and Sri Kartik (Kartikeya) were vandalised at a temple in Sirajdikhan upazila of Munshiganj district in Bangladesh.

We request all readers to share other anti-Hindu hate crimes that we might have missed in comments below or by dropping an email to [email protected]. We also solicit support in maintenance of the Hindu human rights tracker database started by us.

Will Delimitation Commission stand the test