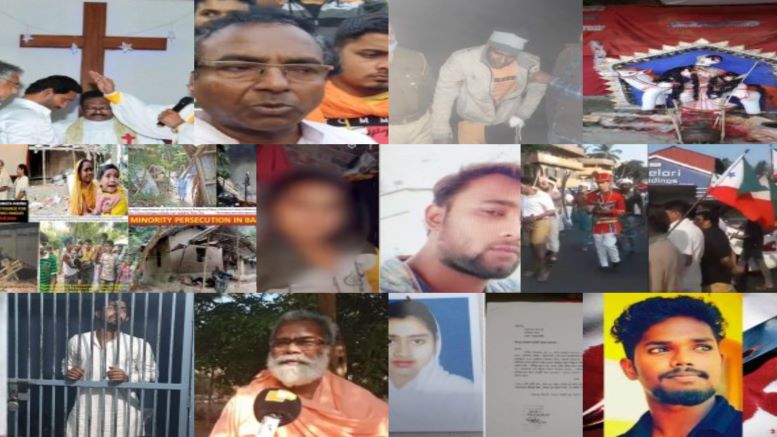 In this weekly summary for the period from 21 February to 27 February 2021, we hope to provide a snapshot of such crimes and hopefully awaken more people around the world to this human rights crisis:

1) A 17-year-old Hindu girl Neetu was bludgeoned to death with a hammer by 25-year-old groomer Laik Khan in Delhi’s Begampur area in Rohini district. Reports indicate Khan was pressurizing the victim for marriage.

2) Local Muslims have threatened to incite violence against Harinam chanting at an Ashram in Nadia which had caused widespread anger among the local Hindu community. As per reports, local Muslims in the vicinity of the Ashram complained that the recitation of Gita and chanting of Harinam at the Ashram was troubling them. They have even threatened the Purohit (priest) and also threatened to close the Ashram.

3) A young man seen making Rotis by spitting on them during a wedding ceremony, has been arrested by the police. The video showing one Sohail aka Naushad spitting on the Rotis before putting them in the Tandoor at a marriage function in Meerut, UP had gone viral on social media.

4) A minor girl was doused with acid in her home after she snubbed Rahil aka Rohil Khan’s advances. The girl was referred to Meerut Hospital due to the severity of burns while the accused Rahil Khan was arrested by UP police after a brief encounter.

5) Legal rights body LRPF (Legal Rights Protection Forum) has reported that the Pastors of the “Believers Eastern Church” of Pittalavanpalem in the Guntur district of Andhra Pradesh are forcing villagers of the area to convert to Christianity and take a payment of Rs. 5000 per month else they will be targeted with cases under the stringent SC/ST Act.

6) An incident of a Periyarist teacher cutting the sacred thread and rubbing the sacred ash worn by Hindu students while giving a lesson on ‘atheism’ to government school teachers has come to the fore from the government high school in Perumal Palayam in Thuraiyur, Trichy.

7) A threat to blow up the Kanyashram (a girl’s residential school) in Jaleshpatta village of Kandhamal district in Odisha has come to light. The current caretaker of the ashram, Swami Jeevan Muktanand Giri, has received two death threats recently and lodged an FIR at Tumudibandh police station.

8) Yet another shameful display of Hindu abuse was on display during a rally organized by the radical Islamic organization Popular Front of India (PFI) in Malappuram. It was the 17th of February and the occasion was the PFI foundation day. The extremists dressed up a couple of their cadre in RSS uniforms chained them and paraded them amidst Islamic chants of ‘Takbir, ‘Allahu Akbar’, and others.

9) A case was filed in the Kharar Police Station in Mohali near Chandigarh against one building construction contractor named Mohammad Feroz for raping a minor Hindu girl for the last two months.

10) A young RSS worker named Nandhu has been brutally hacked to death and another has had his hand chopped off near Vayalar in Alapuzha district of Kerala by SDPI terrorists.

11) On Tuesday night a Hindu resident of the Muslim-dominated Malwani region of Mumbai narrowly escaped the fate that befell Rinku Sharma in Delhi after a communally charged Muslim mob tried to force their way inside his house in a deja vu of the Mongolpuri episode. According to legal rights NGO Legal Rights Observatory, a mob of 15-20  Muslims reportedly tried to barge inside the house of a Hindu youth at the Chheda Complex, Mumbai. However, the mob was unable to get inside the house and the Hindu youth was saved from a certain tragedy.

1) The radical Islamists have carried out a string of brutal attacks in Bangladesh on Hindu minorities in recent times and the frequency of such attacks is increasing with each passing day.

2) A Hindu girl Antara (Nadi) Rani Das has been abducted and forcibly converted to Islam by local Muslims in Bauphal Upazila of Patuakhali district, Bangladesh, her father has stated in a police complaint. The fifteen-year-old minor is a tenth standard student of Kachhipara High School and was missing from the evening of 13th February.

3) The story of the growing persecution of the Hindu Minority by the Muslim majority in Bangladesh is nothing new. Incidents of Hindu temple vandalization in Bangladesh are constantly on the rise. Radical Islamists once again vandalized a Hindu temple in Saghata P. S., Gaibandha District, Bangladesh.