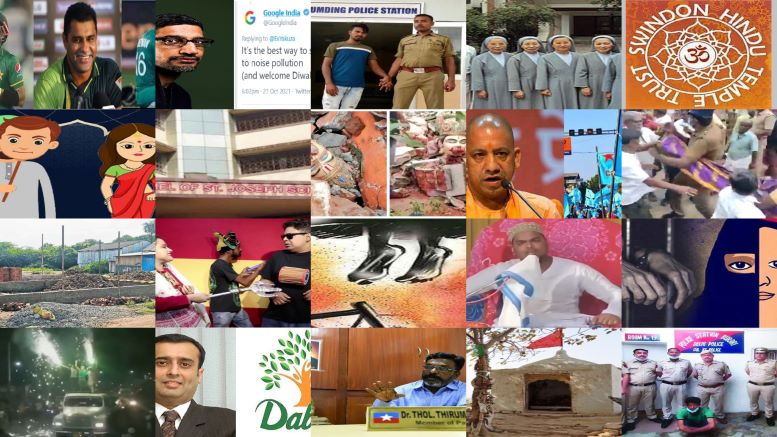 In this weekly summary for the period from 24 October to 30 October 2021, we hope to provide a snapshot of such crimes and hopefully awaken more people around the world to this human rights crisis:

1) Tamil politician Thirumavalavan has implied that Islam and Christianity are superior because they proselytize and are spread all over the world. He also said that Hindu Dharma is lesser because is not accepted by people outside Bharat as it has the caste system.

2) A DMK functionary has been accused of building a shopping complex in the birthplace of Vaishnavite saint Thirumazhisai Azhwar. Devotees and Hindu organizations have protested this attempt to encroach the space and filed a complaint with the HRCE.

3) A newly married 19-year-old named Kirti was killed by her husband Mohammed Azad Khan within days of their ‘love marriage’. The gruesome incident was reported from Kamal Pur near Burari in Delhi. The victim died after Mohammed stabbed her multiple times in the stomach and chest.

4) To no one’s surprise, soon after the Bharatiya team lost the T20 match to the Islamist nation of Pakistan, celebratory fireworks started from regions and localities of Bharat dominated by Muslims. Such celebrations were noticed in many major cities of the country and of course in Muslim majority Kashmir, from where almost all non-Muslims have been ethnically cleansed.

5) Persons believed to be neo-Buddhist radicals are alleged to have climbed atop a Hindu temple and torn down the saffron flag while raising chants of “baudh dharm ki jai jaikar” (glory to Buddhism). The incident is said to have occurred in Uttar Pradesh’s (UP) Farukkhabad on October 20.

6) Not even 6 months into swearing in DMK has proved the accusations of the party being anti-women. In a scuffle during the local body elections, a woman was disrobed in the middle of the street by DMK thugs in Tenkasi. Even though the video has gone viral on social media, so far no action has been taken on the person who outraged the modesty of the woman.

7) Alleged Halal mafia beat up a woman entrepreneur in Ernakulam, Kerala for serving non-halal meat and pork. The victim Thushara Ajith Kallayil blamed the police and administration for registering cases against her and said they are waiting to arrest her outside her hospital room. She says that economic jihadis are trying hard to wipe out Hindu businesses in and around the InfoPark area of Kakkanad in Ernakulam.

8) A Class 11 girl committed suicide by hanging at her house in Deoria after she was allegedly blackmailed by her male classmate.

9) The ad industry continues to distort Hindu festivals to sell their client’s products, and provoke the silent majority Hindus. Now, Dabur has joined the long list of companies trying to sell their products to Hindus while trying to shove some progressive woke idea down the throats of those very same Hindus.

10) A video showing a yogi/sadhu wearing bhagwa (saffron) clothes being dragged with a rope tied around him is doing the rounds on social media. The man is seen wearing a mask that looks similar to Uttar Pradesh CM Yogi Adityanath. More masked men are seen dragging the rope and randomly beating the central figure.

11) Yet another temple has been demolished allegedly for development work, this time in Andhra Pradesh. Part of the Neelamani Durga Devi temple in Pathapatnam was demolished by the Andhra Pradesh government allegedly for the construction of a flyover. Devotees have raked up protests against this anti-Hindu move with BJP also pitching in.

12) A 35-year-old Muslim man, named Jasimuddin, has been arrested in Assam’s Hojai district for faking the identity of a Hindu man and tricking a Hindu woman into marrying him. Jasimuddin hails from Hojai’s Nakhuti, while the Hindu woman is from Simen Chapari in Upper Assam’s Dhemaji district. Both were working in Tamil Nadu; it was here that Jasimudddin, pretending to be a Hindu, befriended the woman, lured her into a relationship. The couple got married in a temple and embarked on their “married” life.

13) The principal, Jomon PT, had asked a Hindu student named Ansh Twari to cut his Shikha (lock of hair on the top or back of the head, kept by male Hindus). The student informed his principal that his Shikha was a symbol of the Hindu religion and refused to chop it off.

14) A suspected case of grooming has emerged from Jabalpur and the victim with the help of Hindu organizations has reportedly filed a case at the Aadharthal police station. As per available information, on October 23 sought the help of Hindu organizations like VHP, Dharmsena, and Dharm Jagran among others. She stated that the accused had introduced himself as Ankit Thakur.

15) Google advises Hindus on pre-Diwali rituals and asks Hindus not to burst crackers.

16) A Haldwani-based 14-year-old girl Class VIII student who went missing on September 29 was gang-raped and murdered by two of her ‘friends’. The two men have been arrested and booked for murder and rape and under provisions of the POCSO Act.

18) Abbas Siddiqui, the moulvi-turned-politician from West Bengal’s Furfura Sharif Sufi shrine who had made headlines for wishing death upon 50 lakh Bharatiyas (read ‘kafir’ Hindus) when the world was reeling under the threat of Coronavirus in the first half of 2020, has justified Bangladesh anti-Hindu pogrom.

19) A Muslim doctor named Masroor assumed a fake Hindu identity, raped a minor Hindu girl, converted her to Islam, and tried to marry her. The incident was reported from Sungarhi in the Pilibhit district of UP. The victim’s mother said that Masroor introduced himself as Dr. Amit to groom the minor.

21) Two Hindu women are being targeted by Islamists for raising their voice against pro-Pakistan sloganeering in Srinagar’s government medical college. MBBS student Ananya Jamwal and doctor Monika Langeh, both natives of Jammu, are being targeted and harassed by Islamists on social media. Terrorists have issued a threat, calling them “non-local employees and students”.

22)  A 34-year-old Hindu man, named Ravi Nimbargi, was allegedly killed by the family members of the Muslim woman, he was in a relationship with. The Police have arrested the woman’s brother and uncle on a charge of murder.

1) On a Pakistani TV show after Pakistan’s victory over Bharat in the T20 WC, Waqar first praised wicketkeeper-batsman Mohammed Rizwan for his innings, and then added, “The best thing that Rizwan did was, mashallah, he offered namaz on the ground, while surrounded by Hindus (Bharat’s cricketers), which was very very special for me.”

1) Hindu temple at Kati, Gopalganj was vandalized on October 23

3) Avoypad Das is one among several Hindus who have lost everything.

5) A Bangladeshi Hindu woman who has lost everything. Islamists looted her home and burnt her house down at Kasba, Pirganj, Rangpur.

6) Ram Tagore temple Noakhali is a Hindu temple that was safe in 1946,1947 & 1971 but in 2021 this temple was completely destroyed, looted, and burnt by Muslim gangs in Chawumahani, Noakhali.

8) Hindu boy Shuvon Das was arrested on October 21 in Bangladesh under the DSA (Digital Security Act).

9) Hindu boy Asish Mallik was arrested on October 27 in Bangladesh under the DSA (Digital Security Act).

1) Two Catholic nuns from South Korea have been detained in Nepal after they were arrested on charges of converting Hindus by coercion and allurement.