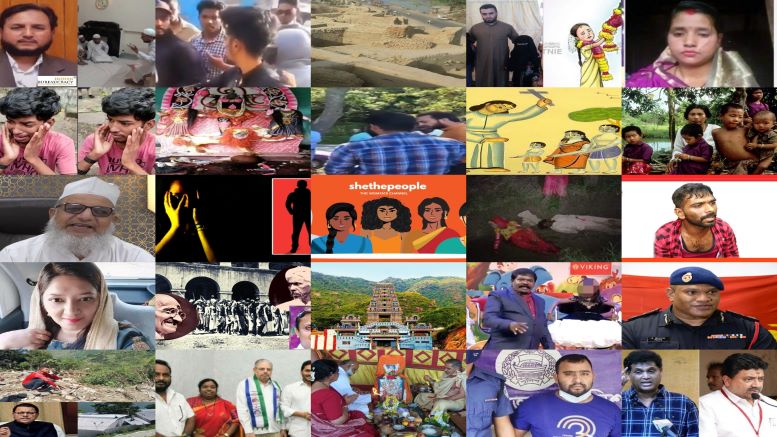 In this weekly summary for the period from 26 September to 2 October 2021, we hope to provide a snapshot of such crimes and hopefully awaken more people around the world to this human rights crisis:

1) Bhopal Police have arrested an auto driver named Arshad Ali for threatening and sexually harassing Hindu girls. The incident has been reported from the Gautam Nagar area of Bhopal. One of the girls targeted by him along with her companions plotted a trap to ambush him and after nabbing him they handed him over to the police. Ali is accused of luring three other girls with the false promises of giving them a job and then forcing them to do sexual acts.

2) A 13-year-old girl was drugged and gang-raped for hours in Ratua of West Bengal’s Malda district on Friday, September 17. Family members of the minor have lodged a report with the local police against three unidentified individuals, who fled the spot of crime after the incident.

3) Shirin Hussain (45), a resident of Ujjain, Madhya Pradesh, has mastered the art of conning people under the guise of women’s rights and human rights. This fraudster used to target Hindu families for extortion and was also carrying out a job appointment fraud. She was associated with an NGO called United International Human Rights Trust and claimed to be the National Secretary of this organization.

5) More than ever Hindu and Brahmin hatred fueled by Dravidianism in Tamil Nadu is reaching new levels now with even elected representatives making cow urine jibes. The DMK government’s Finance Minister and a second-generation MLA are in news for tweeting things that aren’t considered decent or parliamentary in any civilized world.

6) After opposing the temple chariot festival, Muslims of a village in Perambalur have tried to set ablaze the chariot recently. Even though the perpetrator himself has admitted to setting the chariot on fire, police are allegedly trying to protect the man by branding him as mentally ill.

7) Hindus launched a protest against an illegal mosque that has allegedly been constructed near the Tehri dam. In the course of the protest, an argument broke out between the protestors and police personnel.

8) Another Hindu man has been assaulted by Muslims for travelling with a Muslim woman. This is the third incident in a row in the last few days. Last week a Hindu man was attacked in Nizamabad for the same reason. The man was manhandled by a mob after a Muslim man stopped the vehicle to inquire why he was traveling with a girl from their community.

9) Hindu hater Bishop Suresh Kethera’s wife Henry Christina has been elected as the Zilla Parishad Chairperson of the Guntur district. As it is an SC reserved constituency, Legal Rights Protection Forum(LRPF) has written to the Election Commission challenging her candidature. Recently Guntur district collector had declared that Bishop Suresh Kathera is an SC Hindu.

10) Kerala State Tourism Minister Muhammed Riyas said that his government plans to develop a ‘tourism circuit’ dedicated to the 1921 Moplah genocide of Hindus in Malappuram. He added that it is intended to attract history students and tourists.

11) A set of undated videos have emerged which show senior IAS officer Mohammad Iftikharuddin of Uttar Pradesh cadre urging a group of Muslims to spread Islam all over the world. In one video, a Muslim missionary narrates a bigoted story of how a man in Punjab converted to Islam, while the IAS officer and others listen to him.

12) Christian preacher Ravi Gupta was arrested on September 18 from Bihar’s Supaul district for his involvement in religious conversions. A native of Belhi village under Rajeshwari police station in Supaul district, Gupta had recently converted to Christianity. He was nabbed by members of the Vishwa Hindu Parishad (VHP) who stated that he was involved in the illegal conversion of 30 Hindu families to Christianity in his native village. He was nabbed in adjoining Kanjara village while he was influencing people for conversion.

13) The Karnataka High Court on Tuesday set aside the order of appointment of Muslim Moulvi Syed Ghouse Mohiddin to perform pujas in Dattatreya Peetha (aka Datta Peetha) of Chikkamagalur district. The appointment was made by the Congress government headed by Siddaramaiah.

15) Another child marriage case has been reported from Malappuram district in Kerala, where a 25-year old Muslim ‘married’ a minor. Though The New Indian Express (TNIE) knew that all concerned are from the ‘minority’ community, they tried to change the narrative to slander Hindus instead.

16) Muslim encroachers have illegally occupied the ancient Raja Yayati fort premises at Jajmau hills in Kanpur. The negligence of ASI (Archaeological Survey of India) under whose aegis the fort comes has encouraged encroachers to squat on the historically important structure.

17) In a TV program for kids, Vibhuti, the sacred ash was mocked and equated with excretion of all kinds. Unsurprisingly the anchor who brought it up out of nowhere is a Christian and the channel which broadcasted the show is Kalaignar TV, owned by DMK’s first family.

18) In Uttarakhand there is simmering anger over the administrative bias against Hindus.

19) Hindus of a community have been denied permission to worship their family deity in a reserved forest citing laws. They have gone to the court to let them worship the deity on special occasions and the court has directed concerned authorities to consider their petition and questioned when tourism is allowed why pilgrimage cannot be.

1) Dead bodies of a Hindu family were found hanging by the neck from a tree in Goth Haji Darya khan, Tharparker Sindh. It is said that the marks of torture on dead bodies show that they were tortured before hanging.

1) Six Chakma tribal organizations of Tripura claimed on Tuesday that during the past over 20 years, at least 10,000 Bangladeshi tribals of the Tripuri community entered into Bharat from across the border as their lands were being grabbed by the Muslim settlers in the Chittagong Hill Tracts (CHT).

2) A Hindu woman was abducted and gang-raped by Muslims led by Mohammad Habib Khan at Gobindapur, Faridhanj P.S, Chandpur district. The victim has been identified as Sumi Rani.

1) Papua New Guinea Police Commissioner David Manning, who is also the nation’s designated Pandemic Controller, has denied permission to the nation’s Hindus from holding Durga Puja prayers. The reason: it is a form of idol-worshipping which is morally inappropriate and against our Christian values.