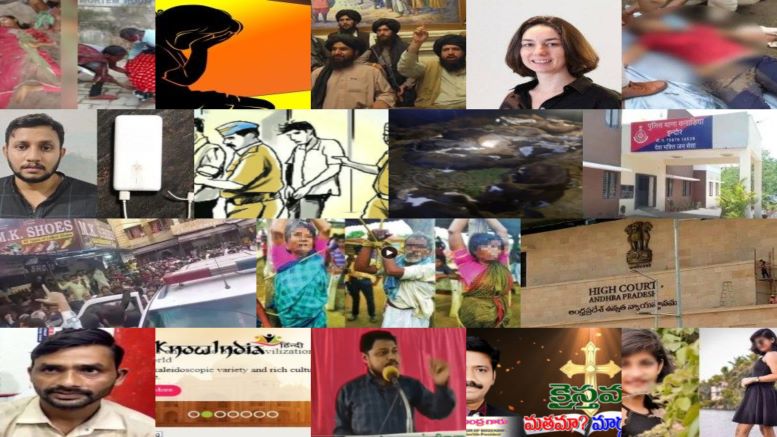 In this weekly summary for the period from 22 August to 28 August 2021, we hope to provide a snapshot of such crimes and hopefully awaken more people around the world to this human rights crisis:

1) The Hassan police in Karnataka on Monday arrested 10 persons in connection with the death of 18 calves while they were being illegally transported. More than 50 calves were stuffed inside a small goods vehicle. The miscreants had tied the legs and mouths of calves and stacked them one on another. The police, which had registered the case in this regard, have now arrested 10 persons. The arrested have been identified as Nurulla, Saleem, Sabir, Ahmad, Adbul Mubarak, Purushottam, Sultan, Arif, Irfan, and Jeevan.

3) A chilling video of a violent mob chasing and hounding a police van has gone viral on social media recently. The dreadful incident was reportedly filmed at Indore’s Mumbai Bazaar on August 13. The mayhem was triggered by a group of Muslim youth harassing two minor girls belonging to the Hindu Valmiki community. On that day, Suresh Khade, a local vegetable vendor had taken his two nieces to a juice shop. The girls were relishing their drink when groups of men, reportedly from the Muslim community, started to pass comments and harass them. These men also demanded identity cards from the minor girls and asked them to produce their Aadhar cards.

4) Yet another tragic case of grooming jihad has claimed a young life, this time in West Bengal. In July, the dead body of a 14-year-old girl Pamela Adhikari was found hanging from the ceiling fan of her house in West Bengal’s Howrah city. The shocking sight was discovered by her family members who then reported the incident to the Bali police station. She killed herself after being blackmailed by Sheikh Taruf aka Sunny.

5) 20-year-old Trushna Rani Nath committed suicide after she was molested by 65-year-old Muskin Sheikh in Odisha’s Bhadrak district. As per reports, the accused is well-connected and powerful as a result of which the police are alleged to be shielding him.

6) Indore has lately become a hub of Grooming Jihad cases with incidents of Muslim men trapping Hindu women with forged Hindu identities becoming a regular. In one such recent complaint filed in the MP town, a Muslim man named Faizan posing as Kabir first befriended a 35-year-old Hindu woman running a beauty parlour in Kanadia area, Indore. The woman was then raped by Faizan at knife-point and an objectionable video was shot of her. Using the video, Faizan continued to blackmail and sexually abuse the woman.

7) Five from ‘other community’ held for gang-rape of a minor Dalit girl in UP.

8) Despite the fact that the rule of Mughal invaders represents the true face of Islamism and was responsible for the massacre and forceful conversions of Hindus as well as desecration and destruction of Hindu temples, successive Bharatiya governments seem to be in awe of the Mughal Empire. Recently, a GOI portal was seen singing praises of the Mughal empire. It later edited the data after netizens raised objections.

9) Towards the end of last month, 21-year-old Kashish Parmar’s body was found in a gunny sack lying in a drain in Bhopal’s Khajuri area. As per her maternal uncle, Kashish had gone out to meet Akhtar Ali (33) who brutally murdered her. Ali hit her with a stick, stabbed her, and then packed the dead body in a sack and flung it in a sewer near his house.

10) Muslim bangle-seller Tasleem Ali identified who himself as a Hindu was booked for molesting a Hindu minor in Indore, MP.

11) Tamil Nadu Towheed Jamaat has come out in support of the Taliban. A functionary of the quasi-terror Islamist organization has compared the Taliban’s Islamic policies with Hindu customs and degraded PM Modi as well. In a viral video, he can be seen daring Hindus for a debate with him about Sati and the alleged ‘regressive’ practices of Hindu Dharma.

12) A man who filmed bathing women to take revenge on his Hindu neighbor has been arrested in Thanjavur, Tamil Nadu. Nasir Ahmed, a 35-year-old man placed his mobile phone with a power bank to film his Hindu neighbor’s wife and daughter in their bathroom.

13) Two SC families were assaulted over ‘black magic’ after being named by ‘possessed’ women on Muharram.

14) Following Congress’s attempts to stoke separatism by encouraging the concept of the United States of South India, a Christian sect based in Andhra Pradesh has demanded a separate Christian country. The Deputy Director of Bible Open University International(BOUI), pastor K.Upendra has demanded that Christians be given a separate country by dividing Bharat.

15) A Muslim conversion ring has been busted in Nuh, Haryana. Details about the conversion ring emerged after two Hindus who were lured with money, job and marriage filed police complaints. Three Muslims including a maulana have been arrested and their funding activities are being investigated.

16) In a curious ruling today, the Andhra Pradesh High Court (HC) has allowed the Andhra government to allot part of a Hindu burial ground for a Christian cemetery.

17) Meerut police have arrested a Muslim man named Abdul Salam for luring at least 4 girls in the last 15 years by faking his identity. The accused allegedly kept using different Hindu names to deceive the victims, then married and sexually exploited them. Abdul Salam also tried to convert his preys to Islam. The action against him was taken against Abdul Salam after his first wife Pinky along with another girl who had fallen into his trap approached the Meerut police with a complaint against him. Abdul Salam got his driving license made in the name of Vicky Singh while his Aadhar card is made in the name of Anil Saini, and trapped Hindu girls using such fake identities.

18) In an outrageous incident that occurred in the city, a minor Hindu girl was abducted by a religious fanatic. The Police initially avoided searching for the girl; however, after the Hindu Janajagruti Samiti followed up, they immediately searched for the girl. The girl’s family has demanded strict punishment for the accused in the case.

1) More than 1000 non-Muslim, girls are abducted, raped, forcefully converted to Islam, and sold as Sex slaves in Pakistan. There is no one to save them as the law & system of Pakistan supports such crimes, instead, the victims & who help them are punished. Most of the converted girls are impoverished Hindus from southern Sindh province.

1) A Hindu boy Mithu was brutally murdered by Mohammad Haruno and others at Pathorgata, Barguna.

1) Britain’s most fanatical hate preacher is urging the Taliban that non-Muslims living in Afghanistan must pay a tax known as “jizya”, often referred to as the “infidel tax”.