Hindus under assault from within and outside – Time to act. 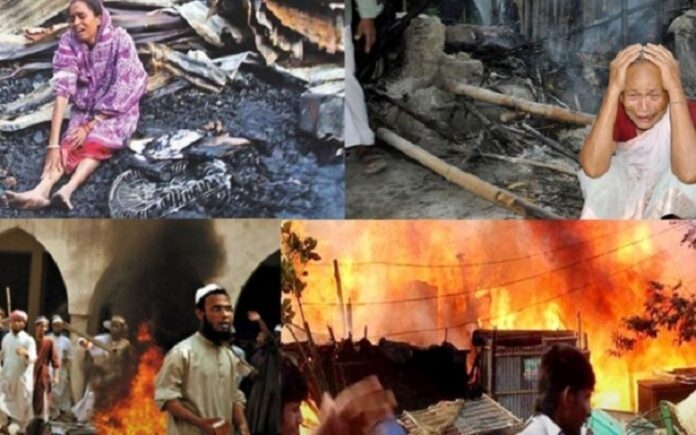 The broad daylight cold blooded target killings of minority Hindus in Kashmir by Pakistani  sponsored  terrorists has failed  to evoke any response from the UNHRC (United Nations Human Rights Commission) which has also chosen to maintain a stoic silence on the blood curdling killings, desecration of Hindu temples, pavilions  and torching of Hindu homes in Islamic state Bangladesh.

The same human rights body under its then Commissioner Michelle Bachelet had raised a hue and cry over the abrogation of article 370 in Kashmir and the Passing of CAA (Citizenship Amendment Act) by our parliament. In fact she had moved our top court against the passing of CAA which provides citizenship to persecuted minorities in Islamic states like Bangladesh, Pakistan and Afghanistan.

Now when Hindu temples are being desecrated, murtis vandalised and their homes are being burnt by people of the ruling Awami league and the Jamaat-e-Islami the UNHRC, the UN and are own so called secular parties and pseudo seculars have lost their voice.

In fact Bharat which has been re-elected to the UNHRC for another 2 year term starting in 2022 should take the lead in galvanising member nations to condemn the atrocities on minorities in Bangladesh and force the respective governments to safeguard the interest of minority Hindus and Sikhs.

Prime Minister Modi should himself intervene and talk to Sheikh Hasina to take strict action against the vandalisers. It is high time a global  campaign should be launched for the protection of minorities in Islamic countries like Bangladesh and Bharat should use its diplomatic muscle to garner global opinion and support.

The powerful Hindu community in the US should use their leverage and clout in Capitol hill to make the US President and especially the Bharatiya origin Vice President Kamala Harris act strongly to protect the interests of minority Hindus in Bangladesh and Pakistan.

The relevance and necessity of CAA to protect minority interests in Islamic countries has been vindicated and the hollowness and emptiness of opposition protests have been thoroughly exposed. The Modi government should now implement the CAA at the earliest and not keep it in abeyance.

The modus operandi of planting fake stories of blasphemy against Islam on social media and then getting an excuse to persecute Hindus has been called out loud and needs to be exposed.

This ploy has been in use to make Hindus flee from their homes in Bangladesh so that their property and wealth can be taken over by the supporters of the Awami league and the Jamaat-e-Islami . This is how the Hindu population in Bangladesh has dwindled to a meagre 2% from approximately 22%.

The target killings in Kashmir should be dealt with a heavy hand by the security forces by  immediately destroying all launch pads through artillery shelling or aerial strikes before the terrorists infiltrate the LOC and are hard to find like the ongoing 9 day Poonch encounter is indicating.

As for the persecution of Hindus in Bangladesh the Government of Bharat should convey its anger in unequivocal terms and use it’s regional clout and muscle flexing to make the Bangladesh government act swiftly against the perpetrators.