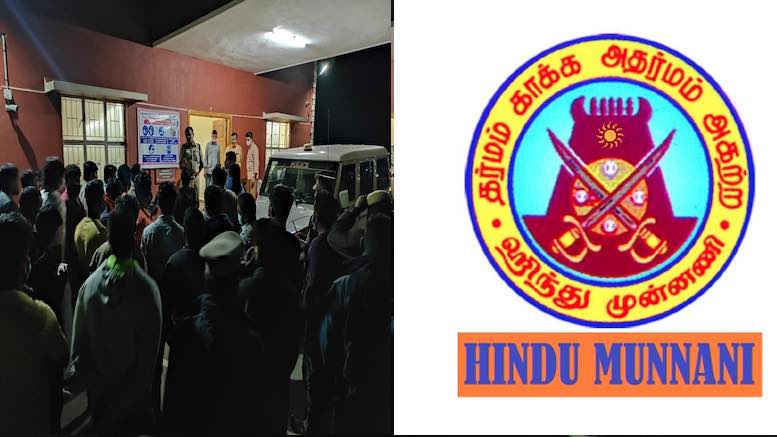 Hindu Munnani activists who had with the help of locals caught and handed over a Christian missionary found denigrating Hindu Dharma to the police, were intimidated and assaulted by police at Therpettai police station near Hosur, Tamil Nadu, reports The Commune.

Hindu Munnai, a human rights group resisting the demonisation and persecution of Hindus at the hands of dominant Dravidian forces in Tamil Nadu, also tweeted about the incident from their twitter handle.

The Commune reports that <span “>the public had informed the Hindu Munnani leaders in the area regarding a group that had been involved in Christian proselytization through ‘jeba koodam’ (prayer meetings).

Such prayer meetings usually involve denigrating Hindu deities and proclaiming ‘Jesus as the only son of God, who alone can guarantee salvation’. Missionaries claim protection under Article 25 of the Constitution, conveniently hiding the fact that the right to practice and propagate religion is subject to public order, morality and health. Local Hindus who were not ready to accept this hate-mongering against their Dharma and religious beliefs opposed the missionary activity.

Following this, a Hindu Munnani activist with public help caught one of the missionaries who had come and took him to the police station. But Assistant Inspector Selvaragavan is said to have intimidated the complainant instead of taking action against the missionary.

Later, Hindu Munnani Divisional Secretary Umesh had arrived at the police station after the intimidated activist informed Hindu Munnani leaders. But the inspector abused Umesh too and even threatened to kill him, claims Hindu Munnani. It is alleged that another policeman Prabhakaran attacked Umesh.

Following this, the Hindu Munnani cadres staged a road blockade in front of the police station demanding immediate action against the two policemen. To bring the situation under control, the Hosur DSP arrived to mediate and assured Hindu Munnani that appropriate action would be taken. <span “>