“We had strayed away & hence left Hindu Dharma”, say 1100 Christians who did Ghar Wapsi & were welcomed by Prabal Pratap Judeo washing their feet with Gangajal: C’garh 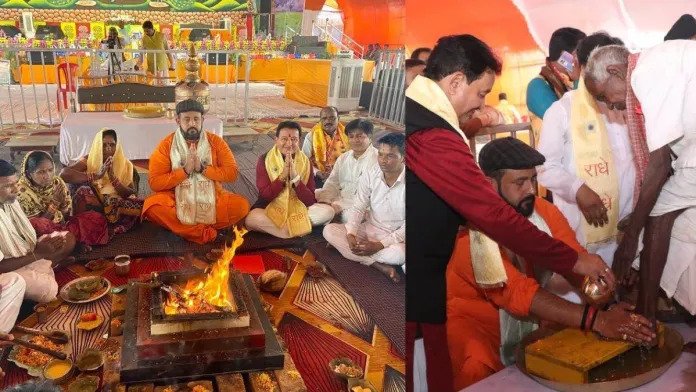 Prabal Pratap Judeo washed the feet of 1100 Christians who did Ghar Wapsi in Chhattisgarh’s Mahasamund District with Gangajal. They returned to Hindu Dharma on Thursday (January 19), the third day of the Bhagavad Katha recitation held in the district’s Basana.

According to reports, those who did Ghar Wapsi said they had strayed away from Dharma and accepted Christianity. However, they returned to their mother faith after realizing their mistake. Kathavachak Pandit Himanshu Krishna Maharaj administered the oath. “1100 people of about 325 families returned to Sanatan Dharma”, Prabal Pratap said.

“It is a bigger and more important task to save Hindus and stop them from converting to other faiths. Whenever Hindus have been divided, the Hindu population has declined. Let us respect our ancestors. Hindutva is a symbol of nationalism, so let us join hands to create a Hindu Rashtra”, Prabal Pratap further said.

Prabal Pratap Singh is the son of Dilip Singh Judeo, who served as the Minister of State for Environment and Forests in the Atal Bihari Vajpayee government. The Judeos hail from the Jashpur Royal Family and have great goodwill as well as popularity among the janjatiya samaj of Central Bharat.

Dilip Singh Judeo is credited with starting the Ghar Wapsi campaigns in Chhattisgarh to bring back janjatiyas lured by Christian missionaries. Following Dilip Singh’s death in 2013, his son has continued his father’s work.

“I have been carrying forward this work since my father passed away. In states like Chhattisgarh, Jharkhand and Odisha, we have got more than 10,000 people back to Hindu Dharma through such programs. Our campaign was stopped for about two years due to the Corona epidemic. Now again we are speeding it up. With the Congress coming to power, cases of religious conversions in Chhattisgarh have steadily risen”, OpIndia quotes Prabal Pratap Singh as saying.