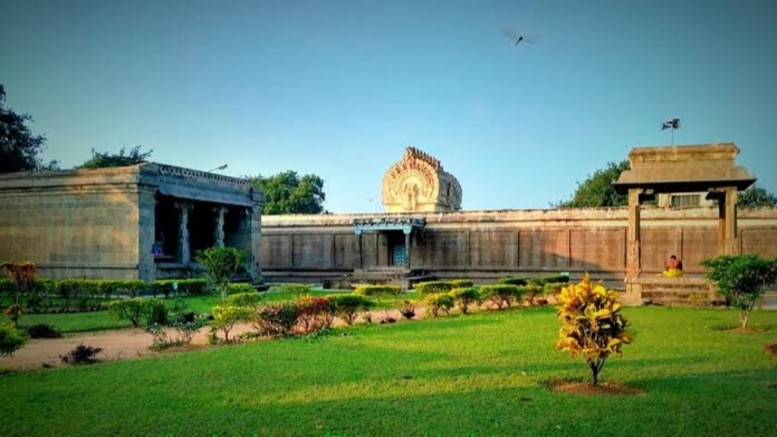 We know that our temples served as centres of learning, arts and even as hospitals. In this pandemic also they are serving as hospitals as the healthcare system is overloaded. But how did they operate as hospitals in the past? What kind of medicines did they use? Who all were employed there? Though many inscriptions about the same have been found all over Bharat, the inscriptions in Thirumukkudal gains importance as it mentions Gau Mutra, a much abused Hindu phenomenon.

The Thirumukkudal Appan Venkatesa Perumal temple inscriptions show that Gau Mutra was used as medicine in Ayurvedic treatment. Located at the confluence of 3 rivers in Chengalpattu, Tamil Nadu, the temple itself is nearly 1200 years old as the oldest inscription in the temple dates back to the 9th century. However it is the 1000 year old inscription from the Chola era that answers our questions. The inscriptions speak about an Adhular Salai (hospital) built in the name of the then king Veera Rajendra Deva(1063-1069 CE), son of the great Rajendra Chola I. Named as Veera Choleswara Adhular Salai(hospital), it operated in a stone hall called Jananatha Mandapam with 15 beds for inpatients. 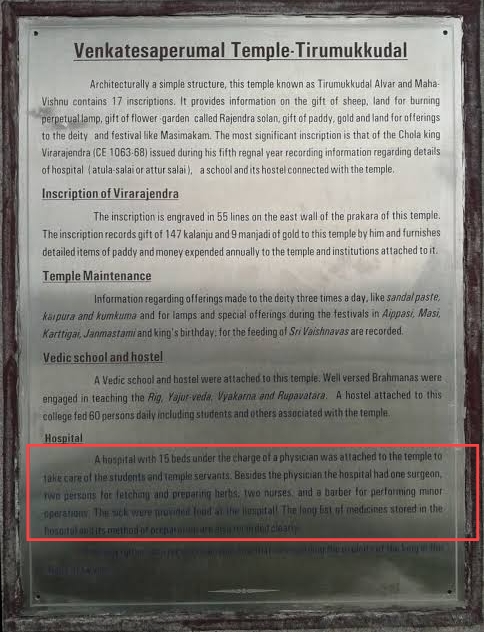 It was established to provide medical care  for the students and teachers of the Vedic school run by the temple. It is clear from the inscriptions that the temple funded both the school and the hospital from its earnings through its properties. The hospital staff consisted of a physician, a surgeon, two male nurses, two female nurses, a potter, a washerman and a guard. While female nurses were entrusted with cooking and nursing the patients, male nurses fetched firewood and herbs.

Not only the students and teachers of the college but the temple staff were also treated by the hospital for free. One of the inscriptions about the hospital details the kind of medicines that were used at that time. In that list, the third one, Gomutra Haritaki, was prepared using Gau Mutra. The Annual Report on Epigraphy notes how the specific medicine finds mention in the 67th verse of 9th chapter of Saraka Samhita and in the 6th chapter of Sushruta Samhita. As per the latter, Gomutra Haritaki, the medicine prepared by soaking chebulic myrobalan or Haritaki, as it is known in Ayurveda, in Gau Mutra for a night, can cure internal piles. It was also used as a medicine for jaundice. Apart from this, the hospital also accommodated mentally ill people and gave them medical aid.

Today the first and foremost weapon that Hindu haters choose to denigrate Hindu Dharma and those who follow it, is the ‘Gau Mutra’ jibe. Even though it is cloaked in pseudoscience rhetoric, it actually is a mockery at the last standing pagans as proved by the terrorist involved in Pulwama attack. Veiled behind the mockery lies the hate for Hindus who worship Gau Mata. The inscriptions show how intrinsic a part Gau Mata played in Hindu Dharma, be it worship, food or even medicine.

Kalonji may help in treatment for Covid-19 infection: Study

This ‘leafy’ solution to diabetes has many takers