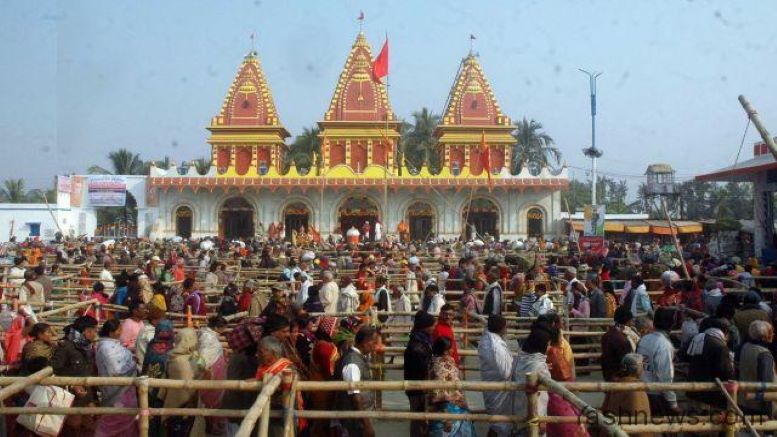 Gangasagar Mela is the second largest congregation of pilgrims in Bharat after the Kumbh Mela in Prayag. The Gangasagar Mela is held in January every year on the occasion of Makar Sankranti when thousands of devotees visit Gangasagar in West Bengal for a holy dip where the Hoogly (Ganga) River meets the Bay of Bengal.

Keeping His word to the Muni, Bhagwan Vishnu took birth as Kardam Muni’s son and was named Kapil Muni. Kapil Muni’s story is related to the story of bringing the Holy River Ganga to this place. According to the story Raja Sagar’s sixty thousand sons came to this place in search of their father’s Sacrificial Horse and they found it there. The horses, however, were stolen by Devraj Indra and hidden in pataal lok (Abyss) near Kapil Muni’s hermitage.

But the king’s sons were unaware of it and blamed Kapil Muni for the theft. The king’s children interrupted his tapas (penance). Muni became furious and his anger turned into a blaze of fire which emanated from his eyes burning the King’s sons and consigning their souls to hell.

Many years later King’s grandson King Bhagirath came to Kapil Muni to beg and pray to the Muni to release their souls from hell. Then as per Kapil Muni’s directions, King Bhagirath brought Devi Ganga to this place, and with the touch of this Holy river’s water, the souls achieved emancipation. The souls were liberated on the day of “Makar Sankranti”. Therefore, to release their own souls from pain, sin and to earn virtue people come here from all over Bharat and even from across the world to take a holy dip in Gangasagar.

The Gangasagar pilgrimage and fair comes second in terms of human footfall after the huge Kumbh Mela. The Kumbh Mela comes once every 4 years and is held at different locations of the north, central and western parts of the country. The Gangasagar Mela is observed annually and only in Sagardwip (Sagar Island).

Sagar Island is about 150 km away from the city of Kolkata, West Bengal and it is an island in the Sundarbans, the largest mangrove forest in the world. Although it is not known how old this festival is, probably the earliest reference can be found in an instruction issued by Governor-General Lord Wellesley in 1803 when he banned the ritual of drowning the firstborn child in the sea.

In 1837, a newspaper mentioned an extract that said the temple was around 1400 years old while the deity was installed by Guru Ramanand in 1437 CE. Among the thousands of pilgrims who attend Gangasagar Mela are the Naga Sadhus. They live in camps, where they perform rituals. These rituals are attended by many devotees. They even perform various forms of yoga. Some Naga Sadhus have white paint smeared all over their bodies and some are without it. These Naga Sadhus are one of the biggest attractions of the Gangasagar Mela. It is said that a dip in the Sagar during Makar Sankranti is pious for all Hindus.