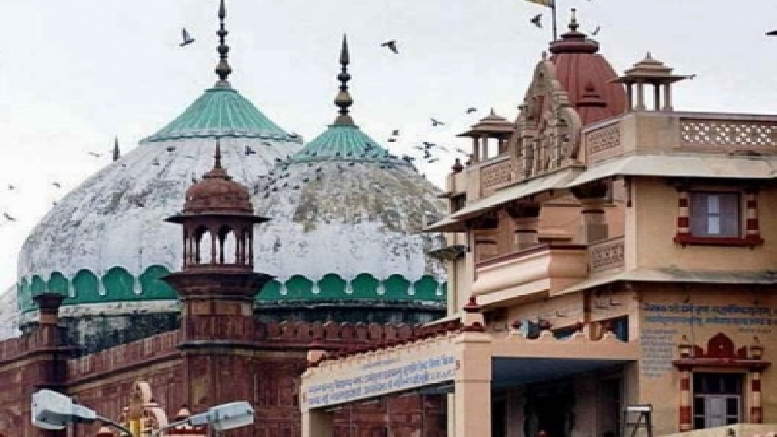 A fresh plea has been filed in the Mathura mosque land case, seeking the court’s directions to the Archaeological Survey of India (ASI) or any other competent authority to scientifically dig out Sri Krishna’s sculpture “buried under the stairs of a small mosque next to Diwan-e-Khas at the Red Fort in Agra by Mughal emperor Aurangzeb in 1669”.

The petition filed on Thursday also demanded that the recovered idols be safely placed at the Krishna Janmabhoomi temple complex.

The court will take up the matter on April 19.

The petition filed by advocate Mahendra Pratap Singh, stated that several historians have mentioned in their articles that Mughal ruler Aurangzeb took many sculptures, including that of Sri Krishna, from Mathura to Agra after demolishing the Thakur Keshavdev ji (Krishna Janambhoomi) temple.

Later, the deities were buried under the small mosque at Red Fort in Agra.

“The aim was to hurt sentiments of the Hindu community by followers of Islam, like Aurangzeb and his family members and others,” the application stated.

Earlier, Singh filed four pleas related to the disputed site in the court. One sought the court’s directive for a status quo in the mosque premises before its examination by the court commissioner. The plea accused the Shahi Idgah Masjid authorities of trying to remove the mosque’s stone slabs and other structural material bearing the Hindu religious inscriptions.

Another application sought the appointment of a court commissioner to examine the disputed mosque and present a fact-finding report into the matter.

The other two pleas were related to dismissing the mosque management committee and appointment of the receiver from the court and seeking the ASI report to know the era of the stones used in the mosque.

Advocate Mahendra Pratap Singh, along with his co-applicants, had earlier moved the court for shifting the 17th-century mosque located near the temple which devotees believe to be the birthplace of Sri Krishna.

He told reporters, “We have moved a fresh application with a request to direct the competent authority to scientifically dig out the area of the mosque in Red Fort.”

A total of seven suits are pending with Mathura courts on the issue. Six have been filed in Civil court while one in the district court.