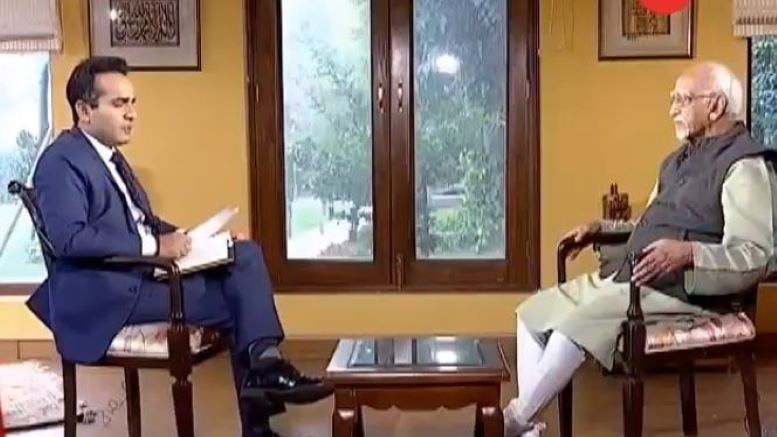 Ex-Vice President (VP) of Bharat Hamid Ansari in his recent interview with Zee News anchor Aman Chopra exposed his Islamist attitude when he spoke about Muslims feel insecure in Bharat. This is not surprising given the fact that Ansari had not only opted to attend radical Islamist organization PFI’s conference but had also opined that there was a sense of insecurity among Muslims in an earlier interview.

Ansari was on the show following the release of his autobiography “By many a happy accident”. The interview was, however, not as smooth sailing as the ex-VP would have expected it to be with Chopra putting forward many discomfiting questions that seem to have rattled Ansari.

During the course of the interview, Chopra also raised questions related to Ansari’s last interview at the time of his retirement when the latter had told anchor Karan Thapar that Muslims were feeling insecure and that the ambience of acceptance that has existed in Bharat for several centuries was ‘under threat’.

Karan Thapar: Many people say that as a result of such comments, as a result of the mood they have created, the Muslim community is apprehensive, it is feeling insecure. Is that a correct assessment of how Indians Muslims feel or it is an exaggerated one?

Hamid Ansari: Yes it is a correct assessment, from all I hear from different quarters, the country; I heard the same thing in Bangalore, I have heard from other parts of the country, I hear more about in north India, there is a feeling of unease, a sense of insecurity is creeping in.

While Ansari reiterated the point about Muslims feeling insecure in his latest interview as well, he was unable to point out the reason for the same. In fact when Chopra questioned Ansari why he felt that secularism has almost disappeared from government’s official vocabulary as alleged by him in his autobiography, the latter at first that he did not know.

However, when the anchor pushed further Ansari said he was of the opinion that in general the number of times the word has been used both among the public and government has dwindled in general but he would have to research the same so as to be able to provide figures to Chopra.

Chopra also quoted several recent instances including that of Tandav and Munawar Faruqi where the quotes had made specific observations but Ansari retorted that he would like to stick to the Bomai judgment as far as his definition of secularism was concerned.

On the question of minority appeasement, Ansari said that there is nothing like appeasement in this country. He added that appeasement means over and above something that is required and there is no context to use this term in Bharat.

The anchor, however, kept pushing Ansari to open up more with regards to his view on secularism and wanted to know if the ex-VP was of the view that secularism has totally disappeared from the public space. Ansari kept beating around the bush and said that while he can’t claim to have complete knowledge about the same as he is no more in the public sphere but it apparent that secularism has disappeared and that he can’t see it anywhere. He also added that in this regard he does not know much beyond what is being reported in the newspapers from where he draws the conclusion of Bharat no longer being secular.

When coaxed further though Ansari was unable to pinpoint his reason for holding the viewpoint and only said that he came to such a conclusion based on what people told him and that there was no specific reason for the same. He replied in the affirmative when the anchor asked if there was secularism pre-2014 while adding that it was insufficiently present then. Ansari became quite agitated and angry when Chopra brought up the various statements of UPA leaders regarding Hindu terror, first right of Muslims on resources etc and declined to answer them.

Ansari went on to emphasize that he still holds the view that Muslims have a feeling of insecurity in this country. He cited the example of public lynching but had no reply when Chopra brought up the topic of Hindus being lynched. Ansari did bring up Uttar Pradesh (UP) to insinuate that Muslims were being systematically targeted and locked up citing love jihad, triple talaq or any other similar pretext. He was also of the view that triple talaq was not a religious but a bad social practice.

What came next was probably not what Ansari expected as he wanted Chopra to stick to the contents of the book and even believed that the latter had come there with a predetermined mindset. Chopra went on to list all the offices that Hamid Ansari had held including a 10 year term as the country’s vice president and wanted to know why despite the country having given him so much, Ansari issued a statement regarding Muslims being insecure in Bharat while he was leaving office.

The irritation and anger was writ large on Ansari’s face as was embarrassment when Ansari accused Chopra of coming there with a mindset and it was not he who had invited the anchor. Ansari refused to answer and chose to walk away when Chopra persisted and named Hindus who had been lynched.

While Ansari held that Chopra had arrived to interview him with a particular mindset, the fact is that Ansari was unable to substantiate his claims.

Ph.D. scholar in Srinagar arrested for seditious and terror-glorifying article, was paid Rs. 30K pm by centre until March 2021