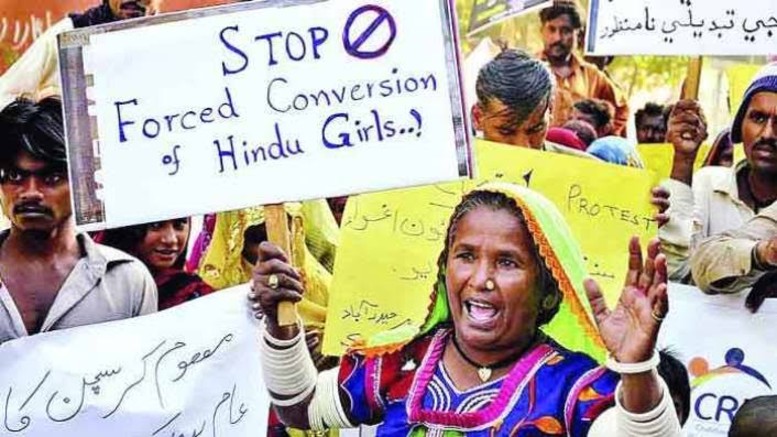 Pakistani Islamists have termed the effort to bring anti-forced conversion law as a western ploy to damage the image of Pakistan. Naveed Aamir Jeeva, the Christian politician who lobbied for this legislation faced abuse from Muslims who lamented how such an anti-Islamic thing can happen in an Islamic state like Pakistan.

While the church vehemently opposes even the discussion of laws against forced conversion in Bharat, it seems to have lobbied to get the same passed in the Sindh province of Pakistan. This fact itself should give an impression on the kind of rampant Islamic conversion happening in the province. So perhaps in a move to save the remaining Christians, the church is flexing its muscles to fight against real persecution for once.

While it could save persecuted Hindus as well, it has given a leeway, albeit a weak one, to Islamists of Pakistan to claim innocence. Pakistan’s Council of Islamic Ideology had called for a gathering of academics, activists, and civil society members to discuss the anti-forced conversion bill’s draft.

Unsurprisingly, the group of them concluded that there was no “forced conversion” in Sindh or any other part of Pakistan and pushing towards making the draft a law is nothing but an attempt to tarnish Pakistan’s image on the world stage. The outcome wouldn’t have been surprising if the participants were known beforehand. Mian Abdul Haq aka Mian Mitthu, of Bharchundi Sharif which is the centre of forced conversions in Sindh, was invited for this session organised by the Ministry of Religious Affairs & Interfaith Harmony.

The ministry had neither invited anyone from the minority communities nor did it notify the National Commission for Minorities. Only Muslim “scholars, activists and civil society members” took part in the session to discuss the validity and necessity of the anti-conversion bill. “Forced conversion is a hoax that has no proven factual basis at all but is used to damage the image of Pakistan, its society, and the state.” the gathering announced.

This gives a perspective into how things work in Pakistan. Earlier in Nov 2016, anti-conversion law which was passed by the Sindh assembly was backtracked under religious pressure before it could be ratified. Muslim religious leaders objected to it and threatened to besiege the assembly if the bill received approval of the governor, who then refused to sign the bill into law.

Now also, the bill has been termed anti-Islam and many Pakistanis took to social media to condemn the effort to pass the bill and abused Naveed Aamir Jeeva, the Christian politician who has been pushing for the legislation.

One of the main opposition parties, Jamaat-i-Islami’s chief, Sirajul Haq has also taken this line and said in a public meeting that an international lobby was hatching conspiracies to divide the Muslims on the basis of nationality and sect. He also assured that his party was “ready to help the Taliban morally and politically”. Sirajul Haq seems to think that the bill is meant to “stop youths from embracing Islam out of their own free will”.

The Pakistani establishment is playing the clever game of acting like they are all for protecting human rights by allowing the bill to be tabled. At the same time it uses Muslim clerics to whip up sentiments and sends it to dustbin. 2 mangoes with one stone as the Western countries’ ego gets satisfied and Pakistan can claim “we tried”. But the poor Hindus and other minorities continue to suffer.