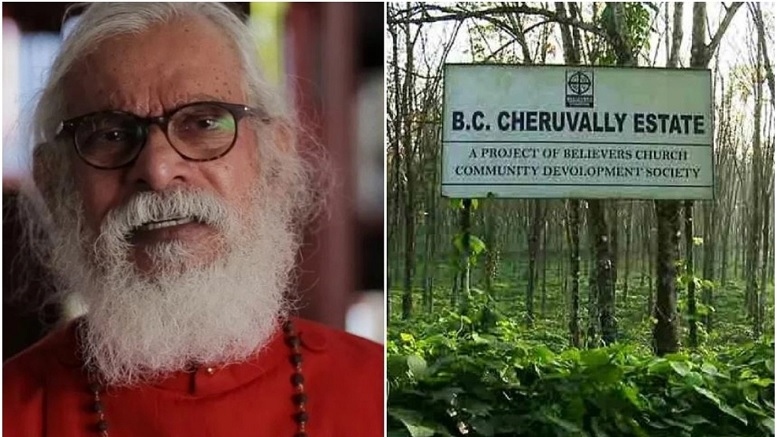 In what is considered a significant move, the Income Tax (IT) Department has attached the 2000 acres Cheruvally Estate in Kerala owned by a Christian evangelist cult called the Believer’s Church associated with controversial Godman KP Yohannan. The land includes the proposed site for another controversial plan of the communist government in Kerala, aimed at further disrupting the Sabarimala temple customs, by building an airport near the temple.

It is alleged that Yohannan and his cult received Rs. 6000 crores in foreign contributions. The Deputy Director-General of Income Tax issued notices to Yohannan to appear before it and explain the flow of such huge funds and their utilization. Yohannan claimed inability to travel from Gospel of Asia (another sect based out of US) headquarters in Texas, US where he currently resides and wanted the IT department to wait till the first week of December!

The central government on its part is acting tough on such fraudsters and what followed is yet another step in the right direction. As a precautionary measure, they attached the Cheruvally Estate. Yohannan is said to have indulged in Illegal transactions and tax arrears worth 500 crores are due to the IT department.

The ownership of the Cheruvally estate in itself is disputed and there are allegations of Yohannan usurping the land and its plantations from Harrison Malayalam using forged documents. The dispute still lingers in a local court in Kerala.

Raids conducted across Bharat last year had paid rich dividends in the form of not just currency but also led to the confiscation of possession certificates and title deeds related to huge tracts of land that Yohannan had purchased all over our country. Rs. 15 crores in currency were seized from various offices of the cult in Kerala, Tamil Nadu, Karnataka, Telangana, Punjab, Chandigarh, and Delhi. Yohannan’s house was raided too.

The religious order started in 1978 now claims to have 25 lakh followers in 14 different countries. It became apparent that money collected to convert the purportedly ‘oppressed sections’ of Hindu society to the ‘true faith’ of Christianity, and funneled to Bharat in the name of charity, was actually being utilized to buy properties and real estate. There are other serious allegations of anti-national activities against them. Often, such Christian cults and sect instigate their followers to violence against government policies at the behest of their foreign sponsors. They are also alleged to be working with secessionists and Maoists.

The communist government in Kerala has gone out of its way to try and provide legality to the Believer’s Church cult and its landholdings in the state. What else could justify it being ready to pay for the Cheruvally Estate, which they had claimed as state property until a few years back, for building a new airport? Hell-bent on destroying the very foundational belief and tradition of the iconic Sabarimala temple, they dove head-on into the contrived controversy and ultimately withdrew due to fierce resistance from Hindus. They even offered to deposit with the court an amount of Rs. 570 crores as security for the proposed airport land.

In a win-win compromise for both parties involved, the Communists negotiated with Yohannan and tried to ‘buy’ government land illegally occupied by him. They proposed to build an airport near the Sabarimala temple to woo tourists. The Sabarimala season begins in November and ends in January of each year. Though there are monthly poojas, the temple opens for only a few days during the rest of the year.

Desperation to build an airport near this remote and holy place by an anti-Hindu Communist government gives rise to 2 suspicions in mind of devotees: either the government wants to further exploit the Sabarimala temple commercially while attacking its very foundational beliefs, or they want to dilute the sacrality associated with the place and gradually dilute Hindu traditions with the arrival of a new airport and countless unchecked conversion agents.

On the surface, Yohannan says he is not ready to sell the land. Even if Yohannan is able to prove to the court that the land is legally his, he will not be eligible for the princely amount of Rs. 570 Crores. As per law, anything more than 15 acres can be confiscated using the Kerala Land Reforms Act at a fraction of the existing market rates which are left to the government’s discretion.

The IT department’s attachment of the Cheruvally Estate comes as a boon for the people of Kerala who were watching in dismay as their government negotiated its ‘purchase’ using taxpayer money from a scam-accused evangelical Godman.

Fraudulent independent Churches like Believer’s Church, flush with FCRA funds collected from fundamentalist Christians in Western countries who are told that Hindus are ‘hurting and lost’ as they lack ‘God’s grace’ and are ‘unreached’, have sprung up all over Bharat. While these churches might sometimes be at odds over theological issues with the more established Catholic and Protestant Churches, they are all united in their contempt for Hindu Dharma and share the same end goal of Christianizing Bharat.

This conversion mafia finds a willing ally in ‘secular’ political outfits across Bharat and other #BreakingIndia forces like Islamists and Maoists, who all prefer a weak, divided and confused Hindu society for their specific agendas.