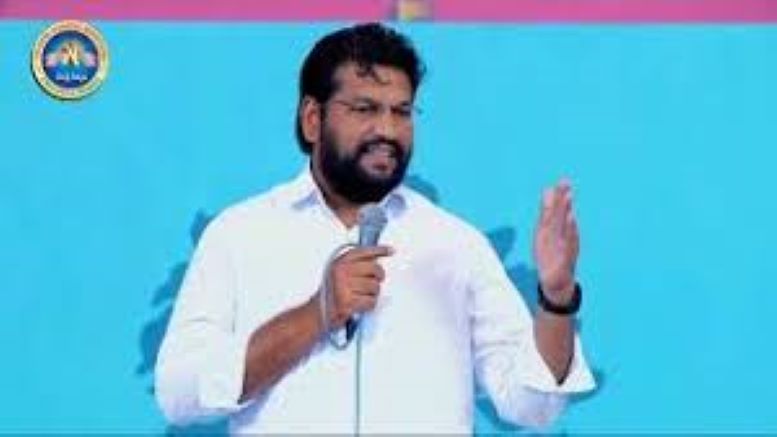 Pastor Shalem Raju, a Christian evangelist from Andhra Pradesh (AP), has issued a warning to political parties and asked them not to mess with Christians who are now in lakhs of numbers. In the video, the pastor also says that those who attempt to do so will only bite the dust.

"Christianity has spread like wildfire in AP. Anyone messing with Christians will bite the dust. Now we are in huge numbers, several lakhs. Don't day dream, Andhra Pradesh is different now, watch out all political parties"- Shalom Raju,Pastor.#noconversion pic.twitter.com/LFnF2onV8u

Be it the ex-CM or anyone from Telangana, they must be careful about what they say. What many of them don’t know is that Christianity has now spread across the state just like water spreads under a mat (meaning very rapidly and widely). Let them not harbor silly thoughts because if they do, no matter which party they belong to they’ll simply have to bite the dust. They think that it is only Dalits who have accepted Christianity but they are mistaken. I myself belong to another varna and have accepted the path of Jesus. There are lakhs of people like me who have embraced Christianity. I have embraced the right path but many of them have still not accepted the true god and are still Hindus.

The Pastor also says that he’ll use the opportunity provided to him for opening the eyes of Hindus who are ignorant and continue to construct temples instead of accepting the true god as I have done. Christian aggression is on the rise particularly in the Telugu-speaking states of AP and Telangana.

Pastor Shalem Raju is not the first one to issue such threats to Hindus. Only recently a video showing pastors threatening Hindu devotees and the temple priest for objecting to conducting Christian prayers within the temple premises in AP had gone viral on social media.

Pastors are regularly known to spew venom against Hindus and Hindu Dharma. This warning of the pastor seems to be in response to TDP’s Chandra Babu Naidu’s announcement of a yatra to save Hindu Dharma even though the date of the video is not clear. The reference to Telangana could be to BJP’s firebrand leader and Telangana MLA T Raja Singh who is known for his fiery speeches and frank views.

Pastor Shalem Raju is a Christian evangelist who runs Thandri Sannidhi Ministries (altar of father/Jesus Ministry). He is known for conducting live prayer meetings but is popular for his songs. Although the video is unavailable now, the pastor had earlier admitted and detailed how he had converted from Hindu Dharma to Christianity, a point he had briefly reiterated in the above video.

Andhra Pradesh has become a hotbed for Christian evangelical activities and evangelists like Pastor Shalem Raju are spilling the beans on the increasing number of Christians which only confirms what YSRCP MP Raghu Ramkrishna Raju had said about large-scale conversions being carried out in AP by Christian evangelical organizations.

The fact that people like Pastor Raju are allowed to get away with such kind of speeches is both deplorable and unacceptable.