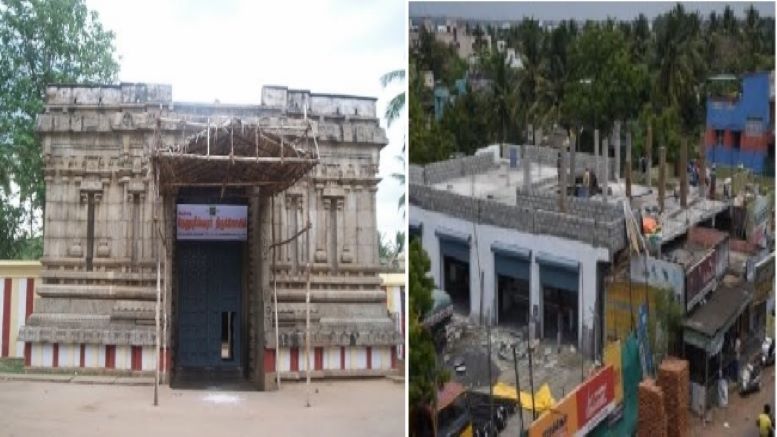 As the Tirumala Tirupati Devasthanam’s decision to sell lands to tackle lack of funds caused by COVID-19 crisis made headlines and was subsequently dropped due to devotees’ protests, it has come to light that prime properties of a 1200 year old Shiva temple, Dhenupureeswarar temple, have been illegally occupied after bribing the Hindu Religious and Charitable Endowment (HR&CE) officials. The temple has been declared a monument of national importance under the Ancient Monuments and Archeological sites and Remains of India Act (2010) and thus being conserved by the Archeological Survey of India (ASI). While the maintenance is under ASI the temple management is under the Department of HR&CE.

It is believed to have been built by Parantaka Chozha II, father of the great Raja Raja I. The temple owns many properties in and around Chennai and other parts of Tamil Nadu constituting around 46 acres and 23 cents of Nanjai land (land has that easy access to water resources) and 26 acres and 69 cents of Punjai land (land that depends on rain for cultivation). Among these is a prime property located on Madappakkam main road of 7 acres and 57 cents, donated to the presiding deity Dhenupureeswarar around 150 years ago. This property has been encroached upon and used to build a shopping complex and residential colony. Tamil daily Dinamalar quoted a local religious elder saying, “Most of the temple property is now either a residential area or agricultural land. A shopping complex and more than 10 houses are being built on this specific parcel of land being encroached now. One Selva Kumar, owner of Shanthi Hardwares and the head of traders association, is the one who is encroaching the property. He has been constructing a two storey shopping complex building. He has bribed the HRCE officials to continue the construction work.

It is further learnt that the concerned officer has received lump sum money from the encroacher and hence he is not acting upon the complaints. The officer told off the complainant to ‘mind his business’ instead. It is agonizing to see the remaining 7 acres of land also being usurped as 95 percent of the land belonging to the temple is illegally occupied. The market value of this property is around 140 crores. If the encroachers are regulated and rent and tax collected strictly, that itself will earn more than 10 crores per annum”.

While devotees allege no action from the Executive Officer (EO), the Village Administrative officer (VAO) said that he was approached by the EO to measure the land and confirm the ownership. The VAO verified the documents and surveyed the land which confirmed the ownership. He then apprised the tehsildar about the issue who suggested the EO to remove the encroachers with the help of police as it’s not in their power. The EO, on being contacted by Dinamalar, said that he had lodged a complaint with the local police on March 22. But police couldn’t act on it and the construction work was stopped due to the lockdown. But then as some relaxations were given amid lockdown, construction works resumed. EO added that they’ve filed a case in the sessions court and hopefully will get a stay against the construction work.

In the month of September last year, a similar issue rose with respect to a 50 cent property. A poultry farm was being run on the plot that belonged to the temple. The EO cleared the encroachment using a JCB machine with the help of police and placed a board stating that the plot belongs to Dhenupureeswarar temple.

An advocate B.Jagannath who deals with temple property dispute cases told the Organiser that the 1963 rules specified in the Hindu religious and charitable endowments Act lay down the manner in which temple property should be leased or auctioned by the EO. Sections 77 to 82 specifically describe the process for removing any encroachment on the temple property. “A special provision is where the police are duty-bound as a statutory obligation to cooperate with the HR and CE official to remove such Encroachment upon a request being given by the Executive Officer of the temple.”, he said. This makes one wonder whether the police were also bribed by the encroacher.

Now that it has grabbed public and media attention, details have emerged that HR&CE has stalled the construction work and is in the process of retrieving other encroached properties of the temple as well. Similarly the encroacher of the property on Madambakkam main road had built a house on the land and tried to convert it into a commercial establishment as it’s of high value. A HR&CE official said to The Hindu, “We are in the process of vacating over 290 encroachers from the seven streets that came up on nearly 20 acres of land belonging to the temple. We have already written to the Revenue Department to not entertain any sale of property or registration in the specified pattas so that people will not further misuse the lands,” Several properties encroached since the 1990s are being measured for evacuation now. Lands on which nearly 60 houses stand have been surveyed so far and HR&CE officials have asked for the help of revenue department officials and the police to finish the remaining ones quickly. They’ve asked TANGEDCO, the electric power provider of TN to disconnect the power connection to the houses on encroached properties and claimed that the houses will be razed down once the measuring is over.

There were allegations that both the ASI and the HR&CE board pointed fingers at each other for failing to conduct the consecration ceremony in 2015, 12 years after it was done previously in 2002 as is the standard practice. Both organisations were accused of not maintaining the temple complex properly as devotees could see cobwebs on the compound wall and deteriorating pillars near the garbagriha (main sanctum). The temple is significant for having a tiny Swayambu Linga as its presiding deity and the sun rays fall directly on the linga on the auspicious day of Tamil New Year.

It is surprising that despite having two government organisations to monitor and preserve its sanctity it is the devotees and temple activists who have to take care and protect both the temple complex and the lands owned by it. Such incidents point out why it is all the more necessary to free temples from the clutches of the government.