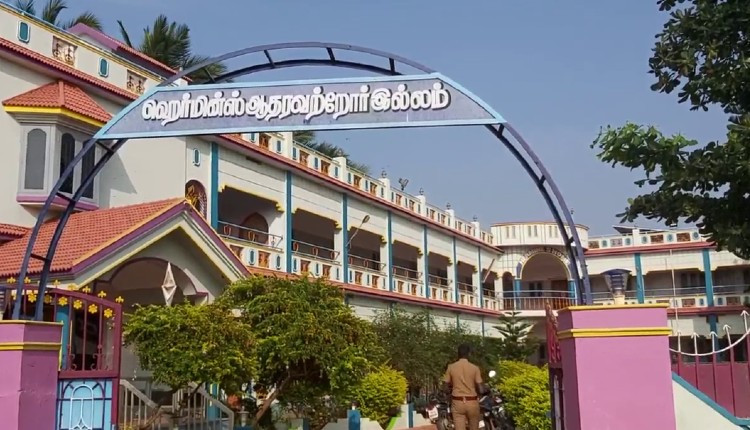 Allegedly the two of them had an illicit affair. Rajammal accidentally came across the two of them in a compromised position and was assaulted for witnessing their act. After the attack Rajammal was admitted in the government hospital and police started investigation based on the doctor’s tip off. Rajammal has revealed that the priest Joseph Isidore who runs the home has been misbehaving with the elderly women and that she had to tolerate it for she was poor and needed the job. As per vernacular news reports, more than 30 children and aged people live in the home.

The home is run by a trust registered as an FCRA NGO. Another pastor Norbert Thomas is said to be the President of the trust. Pastor Joseph Isidore and Jayalakshmi are the trustees as per the information provided in NGO Darpan portal. The trust is mainly funded by the parish churches of Verona and Wisconsin, USA, an individual from Germany and a few American individuals. In between the period of 2010 and 2019 they have received nearly ₹3 crores.

In their FCRA returns they stated the purpose for which the funds were being used as ‘construction and management of the orphanage’ from 2011 to 2014 and they received ₹1.4 crore for this purpose alone.  As per their recent FCRA returns for the financial year 2018-19 they’ve invested ₹1.2 crores as FD using the funds received through FCRA.

They gain nearly ₹10 lakhs as bank interest alone every year and purchase properties using the foreign funds. They’ve declared that they’ve ₹5.7 lakhs cash in hand and ₹7 lakhs in the bank account. One cannot help but wonder what is the need to receive tens of lakhs every year as operational cost of the home if they’re investing in FDs, purchasing properties and having surplus cash in hand and bank accounts.

Despite having such wealth, neither the trust nor the home has any website or even a social media page, generally through which Indian missionaries raise funds from foreign individuals. We get the answer for this from the website of Saint Christopher Catholic Parish in Verona, USA. It says that the church has adopted Saint Hermines Home for the Destitute as one of their parishes and sends tithe money (a one-tenth part of something, which many Christian denominations collect as contribution from all followers) two times every month. They claim that 35 girls and 30 senior citizens live in the home and that these people are the victims of the 2004 Tsunami disaster.

+Sorry for the incorrect translation of the Tamil MSM story. It says 'Fr. Joseph Isidore'. (twitter should give edit feature).

The home was founded in 2005, in the aftermath of the Tsunami when missionary organisations were hugely exploiting the situation to convert the victims of the natural disaster. Fishhook International, a missionary organisation which states the reason behind its name as ‘Follow Me and I will make you fishers of men.’ (said to be the words of Jesus) partners with St. Hermines Home for the Destitute. It works in Bharat alone and cites the reason as ‘to care for widows and orphans, to mentor and train leaders’. It specifically sends money to its Indian partners for missionary work. It also brings their donors to Bharat on visits.

Apart from this, Fr. Joseph Isidore visited the USA in 2008 to collect funds for the home. His journey was also funded by the parishioners in the USA. In Cathloic Herald, magazine of the diocese of Madison, one Kevin Phelan had written about it. The man is a relative of one Dot Talbot, who donated to the other pastor Fr. Norbert Thomas when he was a seminarian. The Talbots donate to Hermines Home for the Destitute till this day. In his write up, Kevin mentions that 30 girls aged from 10 to 14 years were taken in. He paints a gloomy picture that if not for the so-called home, the girls could have been sold and the adults would be dead.

This article was written in 2009 when lakhs of girls in Tamil Nadu were appearing for the 10th and 12th standard public exams alone. But Kevin wrote that girls of St. Hermines Home must be educated ‘to avoid the fate that the caste system defines as their destiny’. It is mentioned that the children go to Fatima Higher Secondary School, 15 km away from the home. The parishioners of Madison diocese gathered funds for a generator and a school bus for the girls.

The 4/14 window (evangelising children between ages of 4 and 14) that missionaries focus on has been brought to attention many times, and yet even with increasing cases of sexual abuses in orphanages not much action is being taken by the government. Catholic Herald mentions that the girls take care of the elder women. If it continues to this day, it’s violative of Juvenile Justice Act rules and the home should be shut down. It should be probed whether Fr. Joseph Isidore made sexual advances on the children as well and whether foreigners visited the orphanage. If they did, whether children were subjected to sexual harassment by foreigners must also be investigated.

Other than that it must be investigated if FCRA funds are used to convert people apart from the inmates and whether properties were bought using the fund as it’s violative of the FCRA rules. Incidentally, as only in the last month the long drawn murder case of Catholic nun Abhaya who was a victim of the illicit affair between a priest and nun, the incident in TN has raised alarms over what happens in churches and orphanages across the state and country. It must be remembered that TN has the largest number of such orphanages in the country.