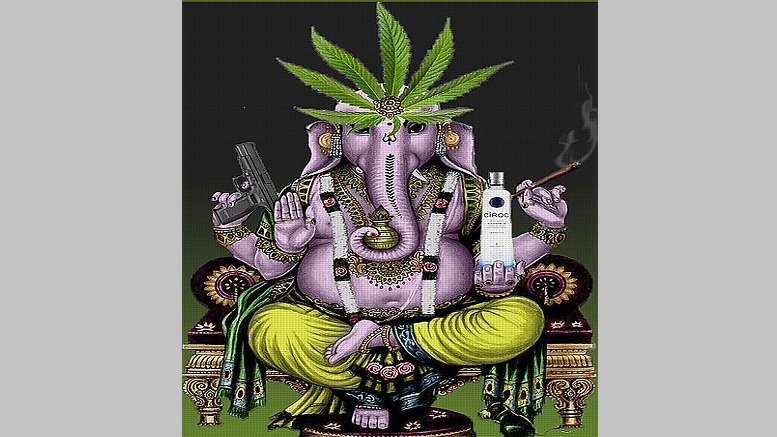 Chicago headquartered e-commerce firm Pixels is being asked to apologize and withdraw products depicting Sri Ganesh as “gangsta”, which is highly inappropriate and a sacrilege.

It was shocking for the Hindu community to see their highly revered deity Sri Ganesh displayed on various products sold on Pixels website; apparently smoking a blunt (marijuana cigarette wrapped in a hollowed-out cigar), carrying pistol in one hand and Ciroc (French Vodka) bottle in the other, with cannabis leaf glued to his forehead; Hindu community leader Rajan Zed pointed out in Nevada today.

E-commerce companies should not be in the business of sacrilege, religious appropriation and ridiculing entire communities. It was deeply offensive to show immensely venerated Sri Ganesh as a “gangsta” (member of an inner-city street gang); Zed, who is President of Universal Society of Hinduism, indicated.

Rajan Zed emphasized that Sri Ganesh was meant to be worshipped in temples or home shrines and not to be mocked at and paraded in a reimagined version as “gangsta” for mercantile objectives. Inappropriate usage of sacred Hindu deities or concepts or symbols or icons for commercial or other agenda was not okay as it hurt the devotees.

Zed further said that Hindu Dharma was the oldest and third largest religion of the world with about 1.2 billion adherents and a rich philosophical thought and it should not be taken frivolously. Symbols of any faith, larger or smaller, should not be mishandled.

Hindus were for free artistic expression and speech as much as anybody else if not more. But faith was something sacred and attempts at trivializing it were painful for the adherents, Rajan Zed stated.

In Hindu Dharma, Sri Ganesh is worshipped as God of wisdom and remover of obstacles and is invoked before the beginning of any major undertaking.