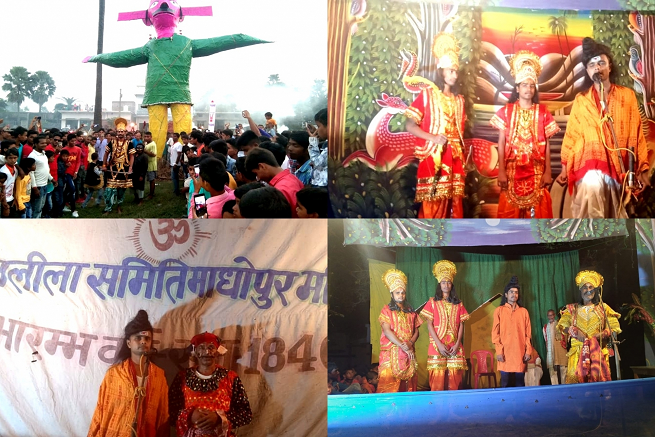 Ramlilas are staged across the country with great zeal. But away from all the frills, there is a village that has been staging Ramlila year after year, for close to two centuries.

The characters and audience of this 182-year-old Ramlila are from this very village – Mathia Madhopur in Kasaya block of Uttar Pradesh’s Kushinagar district has not only kept the Ramlila culture alive, but has also contributed to the pool of talents in different areas across the country and abroad.

This Ramlila began during colonial times and continues to be staged here with same enthusiasm. Added to this, it has kept up the spirit of keeping together the society. No discrimination on grounds of caste, creed or sect was ever seen in Ramlila this village. It has well kindled the flame of cultural unity.

Ramanand Verma, the manager of Shri Ramlila and Mela Trust and the president of the Mela Committee, said that after the formation of Hanuman Chabutra, “Ramcharit Manas recitation started at this place on Panchami of Kartik month in 1839. In 1840, rural artists started staging Ramlila in Bhojpuri. Perhaps the main reason was that people could not speak in ‘Khadi Boli’ and Hindi.”

Sarojkant Mishra, who played a character in Ramlila, said that this event has been taking place here since before the Independence. “With Ramlila, cultural unity was promoted. Nearby people were connected with the event and it played a big role in keeping the spirit of patriotism alive among the people,” he added.

75-year-old Dr Indrajit Mishra said: “Ramlila of Madhopur started under the leadership of Pandit Ayodhya Mishra who returned to the village after seeing Ramlila in Ayodhya. Around the year 1908, Khichdi Baba started trying to get it done in Hindi.”

Youth, elderly and women from every caste and class participate in the Ramlila. The participation of the women during the Ram-Sita marriage is visible as they sing ‘Mangalgeet’.

Amod Kant, president of the Ramlila Trust, said that the artists of Ramlila here are not limited to the stage, but with the lessons learned from here, their confidence is boosted and with their nurtured talents, they get acknowledged in foreign countries as well.

Treasurer Nandlal Sharma said that those who played leading roles in Ramlila here are currently holding prestigious positions in the country and the world. “Some became Director (Personnel) in Defence Research and Development Organisation (DRDO), while someone became Programme Director in reputed institute like Indian Institute of Entrepreneurship.”

Dr Sanjay Dwivedi, who used to direct Ramlila, is now is working as Director (Personnel) in DRDO.

Similarly, Dr Amit Dwivedi, who played Ram, is Programme Director at the Indian Institute of Entrepreneurship at Ahmedabad. He taught the tricks of handling the country’s economy to the officers from Afghanistan’s Ministry of Finance. He had also prepared a startup programme which has been implemented by the Government of India.

Shivkumar Singh, who also played Ram in Ramlila, is a physicist working in Brazil.

Dr Puneet Dwivedi, who played Laxman, had set the record for generic human capsule in 2016. He has several records to his name in the Guinness Book. He is also the brand ambassador of ‘Swachhata’ in Indore. At present, he is very well-placed as a group director of a private company with a hefty 8-figure annual salary.

Aditya Sharma, who played other roles in subsequent generations, is also software engineer in a private company and is similarly well-placed and well-paid.

Manoj Kant, who played the role of king Dasharatha, is now the director of Rashtradharma Patrika. Former Prime Minister Atal Bihari Vajpayee had also worked for this magazine as Editor.