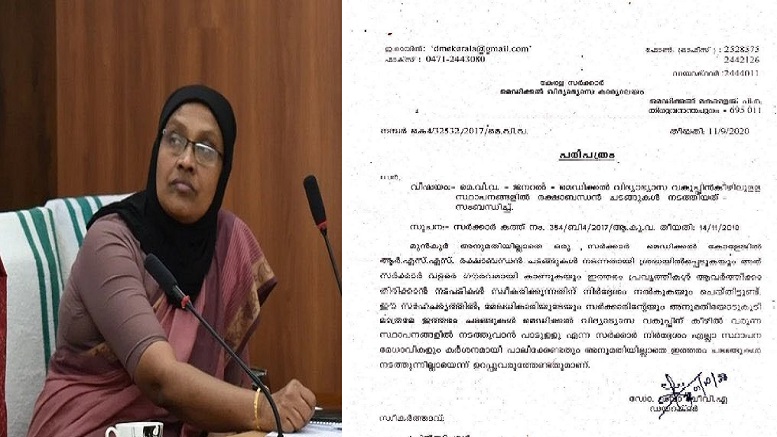 A strange diktat issued by Dr. Ramla Beevi, the Kerala State Director of Medical Education has banned Raksha Bandhan in all Medical, Dental, and Nursing colleges all over Kerala. There are reports that, after this circular communists started asking students to remove Rakhis/raksha sutras at some of these colleges. The order, given above, says that it has come to notice that RSS conducts Raksha Bandhan functions in government colleges without prior permission. It goes on to say that the government takes such serious matters with utmost importance and says that orders have been given to ensure that such activities do not happen in the future. Going forward such programs will need the permission of both the college directors and the government. The directors have to make sure that this order is followed strictly and make sure that no such programs are organized.

It is important to note here that some media houses have run a fact check and concluded that this order does not ban Rakshabandhan, but only demands that students get permission from govt and director for that. It is an amusing conclusion. It is well known that to get permission from govt., one has to go through a long bureaucratic process. It is very much possible that the festival is over by the time the permission is accorded. Secondly, somehow the media houses do not think it is strange that only Raksha Bandhan is mentioned in the circular and not any other Muslim or Christian festival.

It should be noted here that this is not how things used to happen in Kerala. Students belonging to all faiths and classes of the society, study in such medical institutions and it is a common practice to tie rakhis for which caste, religion, and creed were not considered important. This festival was considered an excellent example of human beings pledging brotherhood and sisterhood to each other, especially the ones living and studying on the same campus. Such programs are conducted in all medical institutions all over Kerala. 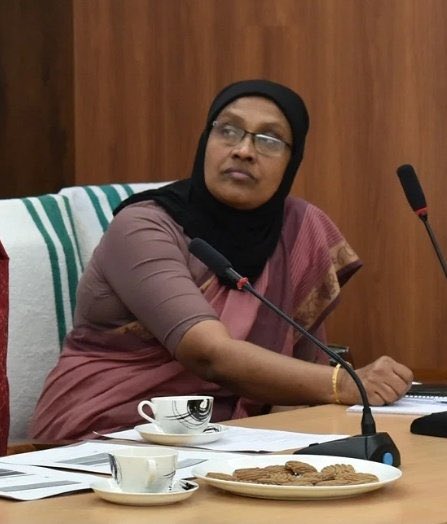 Ramla’s hypocrisy was evident  as she adjusted her headscarf (hijab) while explaining the reason for the order. She said that Raksha Bandhan is a religious program and added that such programs would not be allowed in the campus. This implied that even if students want to conduct such programs and apply through their director, permission would be denied.

Ramla was reminded that such programs are conducted all over Bharat with pomp and splendor and that all religions take part in them. It was also pointed out that everyone from the President of Bharat to the Prime Minister takes part in such programs every year. She did not have any reply.

In any case, this bigoted step raises many questions about Ramla Bivi. How would she treat a patient if he or she were either Hindu or Christian? Would she, as a doctor, be able to fulfill her duties positively considering the naked bigotry that she has revealed? How could she and many others like her wear the burqa and preach secularism?  People on social media questioned whether it will be the mangal sutra next that will lose its legality and whether students will have to remove them before entering their colleges.

The role of Muslim doctors in taking extremist ideology to the Islamic masses has been well expressed by Mahmoud Abu Saud, an Islamist author active in several countries. He wrote, “The doctor has a big say and great weight in influencing his patients and in righteously guiding their orientation. Besides, he should be actively involved in propagating true Islam among Muslims and non-Muslims . . . the best missionary service to be rendered by a medical doctor is to behave at the time in accordance with his Islamic teachings.”

The episode also reveals the infiltration of such Islamist elements into strategic posts in the bureaucracy. The question is would she be in such a high position in the bureaucracy without her higher-up’s covert support?

Incidentally, she reports to the Higher Education Minister K.T Jaleel, who has openly admitted that he has used his official powers to distribute copies of Koran imported from the United Arab Emirates (UAE). The said minister, KT Jaleel faces charges of gold smuggling under the cover of bundles of Korans and also of accepting funds directly from the United Arab Emirates in violation of Bharat’s laws. He has been questioned a couple of times by the NIA.

The way COVID numbers are rising alarmingly also points to the fact that Dr. Ramla has been utterly incompetent in her duties. She would do well to work on patients being sent home with maggots crawling over their paralyzed bodies and handing over a wrong body of a COVID victim to his relatives. Instead she and her ilk are busy trying to foment trouble in the society during these desperate times.