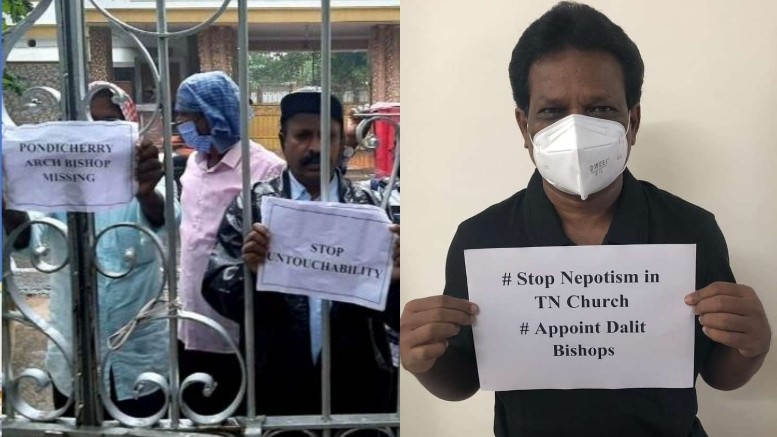 The Catholic Church seems to have planned to defame Bharat in the international forums by spreading misinformation about custodial deaths. In Telangana, a 44-year-old Christian woman, a convert from a Hindu Scheduled Caste (SC) community, died in police custody. While she was booked by the police based on a complaint from a Christian pastor, Christian and leftist portals have started to portray it as a situation similar to George Floyd’s murder in USA.

Mariyamma, the victim, was working as a domestic help in the Christian pastor’s house in Yadadri-Bhuvanagiri district. The pastor alleged that Mariyamma and her son stole Rs. 2 lakh cash and lodged a complaint against them. Based on this, police arrested Mariyamma and her son. It is unclear what really transpired in the police station.

Mariyamma’s son Uday Kiran alleged that police officers kicked his mother in the stomach after which she fainted. He accused the policemen of ‘killing his mother and torturing him’. However police say that she fainted on her own and when taken to hospital she was declared dead. While it was a Christian pastor who accused her of being a thief and perhaps pressured the police to be harsh towards Mariyamma, Christian and leftist portals are drawing parallels with the George Floyd issue.

Union of Catholic Asian News reported (archive link here) this incident as ‘Dalit Christian dies in police custody in India‘. The report quoted Father Z. Devasagaya Raj, former secretary of the Indian bishops’ office of Dalits and backward classes as saying, “When people in America protested after a black man was killed and started a campaign, Black Lives Matter, some people here voiced Dalit Lives Matter. The time has come to intensify it“.

UCA news further wrote, ‘Dalits and minorities community are always at the receiving end at the hands of people of so-called high society, elite groups, administration and government’. It also recalled the incident from last year in which a father and son duo Jayaraj and Fenix died allegedly due to police brutality in Thoothukudi, Tamil Nadu. The incident garnered the national media’s attention which then drew parallels with the George Floyd incident.

One thing to be noted here is how the Christian media outlets appropriate the term ‘Dalit’, which has gained popularity in recent times as an informal substitute for the official category of ‘Scheduled Castes’ (SC). SCs constitute those Dharmic communities which are socio-economically challenged due to feudal and colonial exploitation, and they are given reservation and other government benefits. A ‘Dalit’ cannot be Christian, because the moment a SC converts to Christianity, he/she loses that status.

Christian missionaries prey on SCs and other vulnerable sections of the Hindu and Dharmic population. Using their foreign-funded clout, missionary organizations coerce, brainwash and lure SC/STs away from their ancestral and indigenous religious traditions, which these groups have practiced with autonomy for millennia as members of the Dharmic fold.

Missionaries thrive on the propaganda that SC/STs and minorities are ill-treated and discriminated by Bharat’s state apparatus and ordinary Hindus, deliberately overlooking the huge strides made on the social justice front over the last 100+ years. Such propaganda sells easily with Western audiences that are conditioned to look at Bharat with an Orientalist and racist lens.

The Church has now started a campaign to get reservation benefits for SC Hindus who convert to Christianity. This would make a complete mockery of Constitutional provisions, and act as an incentive for more conversions as neo-convert would then get to avail both, govt. benefits for SCs as well as those for minorities. Already, we are seeing a huge problem in states like Andhra and Telangana of crypto-Christians hiding their Christian identity to siphon off government benefits meant for SCs.

In fact, the socio-economic deprivation of many SC/ST communities is due to the brutal colonial rule by Britishers and laws passed by them like Criminal Tribes Act 1871. The same Britishers bestowed state largesse on Christian Churches and missionaries, making them the largest non-agricultural land holder in the country after the government. So ideally, the Church’s land holding should be nationalized to generate funds to support underprivileged Hindus and other Dharmics today.

While Christian propaganda outlets make everything about their so-called persecution, the truth is anything but. NGOs raise hell when a person from Abrahamic religions is the victim. These same Christian and left-liberal NGOs ignore SC/STs oppression when the accused is a Muslim (as is happening in WB recently), or Christian (as we see in North Eastern states where indigenous faith practitioners are systematically discriminated).

State and central governments go out of their way to address issues raised by Church and Christian NGOs, lest they be accused of ‘communalism’ or of being anti-social justice. However the basis of such issues, true human rights, gets lost in the shrill propaganda.

In the present case from Telangana, CM K. Chandrashekar Rao immediately took cognizance of the issue and directed the state DGP to meet and console the family and probe the case. While Christian activists and opposition had demanded Rs. 25 lakh compensation to Mariyamma’s family, the CM directed that Mariyamma’s son Uday Kiran be given a government job, a house and Rs 15 lakh ex gratia, and Maryamma’s two daughters be given Rs 10 lakh each.

Within 6 days of the woman’s death, on June 24 the Telangana High Court ordered a judicial probe into the matter. For some reason, even though the victim in this case is a Christian, National Commission for Scheduled Castes has also issued notice to Telangana govt and directed the Deputy Commissioner & Superintendent of Police, Bhongir to submit an action taken report in 7 days.

Contrast the speed with which our secular state has acted in this case to the way it has 1.) ignored the post-poll pogrom directed at Hindus, including SCs, of West Bengal 2.) the way the state dragged its feet in giving Rs. 10 lakh compensation to policing firing victim Anurag Poddar’s family. It will become clear who the real second-class citizen in Bharat is.

Few days ago, a man was literally beaten to death in public view on a road by policemen in Tamil Nadu. Unlike the Jayaraj- Felix incident, a video proof is available for this incident. However none outside TN would have heard of it as the victim is a Hindu. If anyone is discriminating based on religion and class, it’s the so called civil society and pro-Christian governments and organisations.

Also, how many non-Christians know about the struggle of Christian converts from SC communities to get a bishop from their own community? They have been demanding that such Bishops from the Christian underclass be appointed in Tamil Nadu for the past 3 decades. They have been writing to the Vatican, the nuncio and other bishops urging them to appoint underclass bishops whenever there is a vacancy.

But even after this much struggle, the Vatican appointed an upper-class bishop for the Salem diocese where converted SCs are said to be in majority. The underclass Christian organisations have accused the Vatican of practicing nepotism as well, and threatened to approach the judiciary if the church continues to ignore their demands. Ironically with such a reputation, the Church is trying to foment trouble in Bharat in the name of social justice.