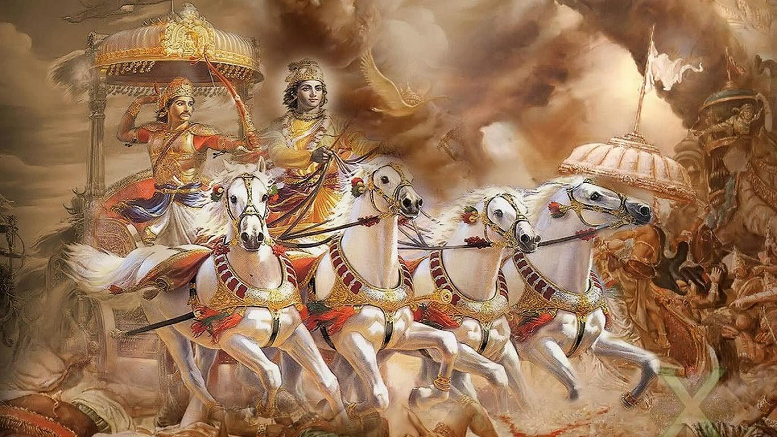 Is the Hindu religion violent? Why is that Hindu gods & goddesses have to fight with demons and slay them? Hindu gods/goddesses have weapons in their hands which keeps their devotees awe struck. Most of the leftists and radical dalit thinkers aver that Hindu shastras/ scriptures glorify violence and acts of violence are considered as heroic feats.

Vishnu Puran details the different avatars of Bhagwan Vishnu which descended on the earth to rid humanity of the evils/sins of demons or forces inimical to mankind & dharma. The great epics of Ramayana and Mahabharata speak about the battles between Rama & Ravana and Kauravas & Pandavas respectively. Even the murtis of some of the Hindu gods/ goddesses appear to be blood curdling.

Take the case of goddess Kali, a very popular deity in eastern Bharat. Just imagine her visuals – tongue protruding out, blood dripping down from the blades of her multiple weapons carried in multiple hands and a garland of skulls around her neck. Does it not depict violence?

Ambedkar felt that Hindu Dharma is a diabolical contrivance to keep a section of population under perpetual subjugation and domination; one of the most effective strategies to keep the ‘untouchables’ under control was to instill the fear of Hindu religion/ gods & goddesses in which violent religious imagery played no lesser part, this thinking went.

For those trained in western-socio political thought processes, understanding violence in Ramayana or Mahabharata is really a tough proposition and we can’t blame the left liberal spectrum for that. Dharma Yuddha may be an abstruse concept for the liberals & the leftists but every person conversant with the Bhartiya civilization knows that Dharma Yuddha is neither about religion nor about converting faiths.

It’s the justification for securing the good of the society even if violent methods are to be adopted to rein in the forces of evil. It’s about fighting for justice and rights. It’s not about aggrandizement or territorial/ demographic expansion but about the betterment of society and protection of the natural laws that keep the cosmos and humanity as a synchronous whole.

Ram killed Ravana not because he eyed the wealth/ territory of Lanka but because Ravana violated the dignity of woman by kidnapping Sita and he threatened the continuation of Hindu religion & culture. In Mahabharata, Pandavas fought for their just rights and for restoring the dignity of Draupadi. Even Krishna, the god himself, was with the Pandavas devising strategies to eliminate the Kauravas and win the battle. From time immemorial Dharma Yuddha has received the sanction of not only the Hindu Shastra/ scriptures but has also been accepted by the society at large. The Hindu scriptures have time and again declared that it’s a sin to commit evil and injustice but simultaneously, it also says that acceptance of evil/ injustice is also a sin.

Dharma Yuddha legitimises the battle that is waged to fight evil & injustice. A person who tolerates/ accepts injustice and bows down before the forces of evil is no less condemnable than the person who commits sin. Hindu gods/ goddesses have taken to violence/ arms to protect Dharma and they saw no demerit in taking recourse to Dharma Yuddha to achieve their objectives.

Dharma Yuddha was not without rules like no Yuddha during night, no charioteer was supposed to fight foot soldiers, no attack on wounded or unarmed soldiers etc. Very rarely would you find Hindu rulers plundering villages and killing women or civilians after their victory and even more rarely would you find Hindu rulers killing people because of their faith and forcing them to convert. You would find rare instances of Hindu armies desecrating the places of worship of the rival armies.

While Dharma Yuddha was to protect the laws of nature and cosmos & promote the cause of mankind, Jihad and Crusades were religious. Both the Islamic and the Christian armies fought with each other in the Crusades to establish hegemony over each other. Crusades in the medieval ages were holy wars in which both Islam and Christianity fought for control of Jerusalem. Jihad which is a holy war for the Muslims talks about killing of non Muslims if they don’t accept Islam and spreading Islam.

No wonder mass conversions of Hindus took place in medieval Bharat and those who didn’t convert to Islam had to pay taxes and live a subjugated life or they were simply assassinated. Dharma Yuddha did not breed terrorism, jihad does. The repercussions of jihad are there for all to see all over the world.

For Hindus, religion has always been a matter of faith. The problem starts when you confuse faith with ideology. And this explains why Bharatiyas must guard against non-Indic religions like Islam and Christianity which have always been missionary.

We have been the land of seekers, not intolerant believers. Most of the liberals and the leftists berate the Hindu epics Ramayana & Mahabharata because of perceived violence in them. This is what the leftists have understood of Hindu epics and perhaps, this is what that is the reason behind their political marginalization in Bharat.

Take out Ramayana – Mahabharata – Gita from the lives of the majority of the Bharatiya population and just imagine what will be the resultant Bharat? A nation devoid of its soul, conscience and value system.

Before talking about violence in Hindu epics, leaders like Yechury & intellectuals like Kancha Illaih should take a look at the espousal of violent revolution by the Communists to achieve their ends and how communists try to manufacture social hatred by its class conflict theory.

For the leftists, human history is not about integration and assimilation but one that has been marked by perpetual class struggles. Left thinks its theory is eternal and universal and this explains its irrelevance in a country where it hasn’t yet understood caste though it continues to feed like a parasite on identity politics often sucking blood of its host. Its latest obsession with Manuvad and brahmanical patriarchy is a crude attempt to reinvent itself after the failure of its class theory in Bharat.

What mayhem has it caused in Bharat can be attested by the deadly Maoist activities and the intellectualization of anti-Bharat activities and yes, the deadly violent political cultures in Bengal and Kerala. Of late, the leftists have been very supportive of the Islamist causes and turned a blind eye towards acts of Islamic fundamentalism & terror because of their visceral hatred of anything that is Hindu.

Hindu religion sanctions Dharma Yuddha to achieve righteous ends. It is a sin to take injustice lying down. Not only the perpetrators of injustice and evil but also those who accept injustice without protest & retaliation are condemned. Even liberal democratic states use violence to tame the unruly mob and punish those who are not law abiding.

The Left-Congress ecosystem has humiliated the Hindus a lot and has not left any stone unturned to ridicule their culture and civilization. Parties formed from alien ideologies and alien ethos will always disintegrate into oblivion. A rapidly saffronizing and nationalising population won’t buy communist sermons on religion and secularism. Dharma Yuddha is not yet over.

(The author works with IGNOU as Assistant Registrar. He is a keen follower of social and political events and an avid blogger. Many of his articles/ posts have been published both online and in print.)