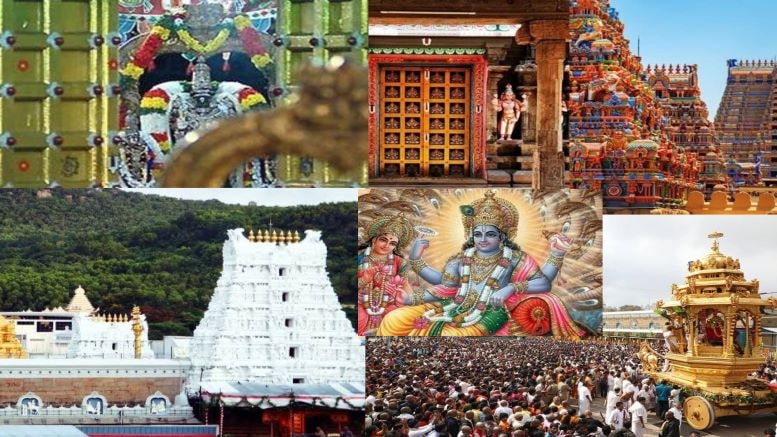 All the temples followed the Covid protocols strictly such as maintaining social distancing, while several temples voluntarily suspended distribution of ‘Teertha’ (holy water), instead they gave away ‘laddus’ as ‘prasadam’ to the devotees. Besides this, the temples also restricted the entry of the devotees as the festival is observed for more than 10 days.

Several prominent Vishnu temples, including Tirupati Devasthanams’s (TTD) Vishnu temple in Vyalikaval, ISKCON, Kote Venkataramana Swamy in Chamarajpet, Srinivasa Temple in Mahalakshmi Layout, and Tirumalagiri Temple in J.P. Nagar have been decked up with a variety of flowers.

Septuagenarian Padmanabha Rao, a devotee who visited the TTD temple in Vyalikaval, told IANS that the Vaishnava worshipers (followers of Bhagwan Vishnu) believe that ‘Vaikunta Dwaram’ or ‘the gate to Bhagwan’s inner sanctum’ is opened on this day.

“The Margashirsha Shukla Paksha Ekadashi in the lunar calendar is known as a ‘Mokshada Ekadashi’. Special prayers, yagnas, discourses and speeches are arranged at Vishnu temples across the world on this auspicious day,” he explained.

Another devotee, Tamme Gowda, offered his special prayers at the Mahalakshmi Layout temple and told IANS that fasting on Vaikuntha Ekadashi is equivalent to fasting on the remaining 23 Ekadashis of the Hindu year.

Quoting Vishnu Purana, Rao said Vaishnavites believe that Bhagwan Vishnu opened the gate of ‘Vaikuntam’ (his abode) for two ‘asuras’ (ego-driven, pleasure-seekers) in spite of them being against him.

They also asked for the ‘boon’ that whoever listens to their story and sees the image of Vishnu coming out of the door called ‘Vaikunth Dwar’ would reach Vaikuntha as well.

“Temples all over India make a door kind of structure on this day for devotees to walk through,” he said and revealed that their family members could not visit Tirupati this year for the first time in seven decades.

“We actually wanted to go to Tirupati but due to the Covid scare, we cancelled our plans and instead we came here. This being a 10-day long festival, we plan to visit all prominent temples across Bengaluru,” he added.

The Vyalikaval TTD temple’s ‘Vaikunta Ekadashi’ celebration Committee member, Kavita Reddy, said the temple had already sent messages to the devotees through WhatsApp, Facebook and other social media platforms to bring their own food to the temple.

“This gala annual event in the temple used to offer food to all its devotees. But due to Covid, we have cancelled it this time. Instead, we have asked our devotees to bring their own food with them,” she said.