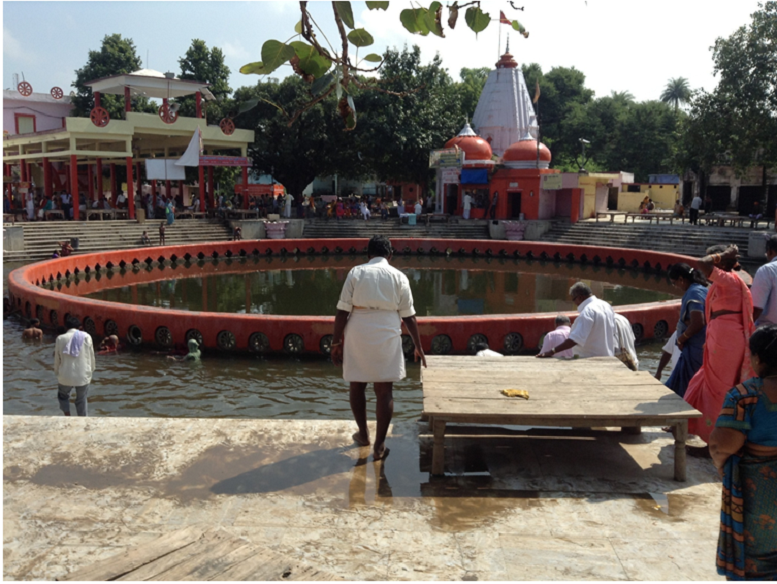 Devaraja Perumal Mandir is a Hindu temple located in Misrikh Neemsar on the banks of the Gomati river close to Lucknow in the state of Uttar Pradesh, Bharat.

It is one of the 108 Divya Desams along with three other places i.e. Ayodhya, Mathura and Gokula and are glorified in the Nalayira Divya Prabhandam of the 12 Alwar saints.

The presiding deity here is Sri Devaraja Perumal with Mata Harilakshmi. The temple is believed to be of significant antiquity with contributions at different times from the ruling kings. The temple is counted as one of the eight temples of Vishnu that self-manifested and is classified as Swayam Vyakta Kshetra along with Tirupati (Andhra Pradesh); Srimushnam, Nanguneri (Tamil Nadu); Muktinath (Nepal); Pushkar (Rajasthan), Badrinath (Uttarakhand); Srirangam (Tamil Nadu).

It is at this place that Indra, the king of the Devas, killed the asura Vritra with the Vajrayudha made from the spine of Maharishi Dadhichi.

Once,all the sages along with Rishi Saunaka were looking for a place to perform their rituals.Brahma made a ring out of Darbha grass and asked the sages to follow the ring where it fell. The sages came to this very spot and prayed to Vishnu who accepted their offerings.

This is the very place where the sacred Vedas were categorized into Rig, Yajur, Sama, Atharva and eighteen famous Puranas were composed.

The architectural plan of the temple is rather simple with many temples scattered around.The presiding deity is Sri Devaraja Perumal who faces east with Sri Harilakshmi by his side.

The Chakratirtha is the core Tirtha at Naimisharanya. The overflowing water is used by the pilgrims to have a holy dip in the Tirtha. It is believed that the holy waters of all the holy places in Bharatvarsha are present here at Chakratirtha.

The Adi Ganga or Gomati flows to the right of this place.

1. Vishnu and the sages exist as huge trees in this place.Hence the pujas and prarthanas are offered to these trees itself.

2. Every new moon day, a large number of people purify themselves with a dip in the holy well. If the new moon falls on a Monday, it is believed that a holy bath in the well and offering to the presiding deity Lalitha will wash away all the sins committed in lifetime.

3. There is a kund called Brahmavarta which ejects anything thrown out of it due to a strong current.The sand also takes the natural form of a Shivalinga as mentioned in Ain-I-Akbari which glorified the tyrant Akbar.

4. Thirumangai is the only Alwar saint to have mentioned this place in ten slokas of Nalayira Divya Prabhandham.