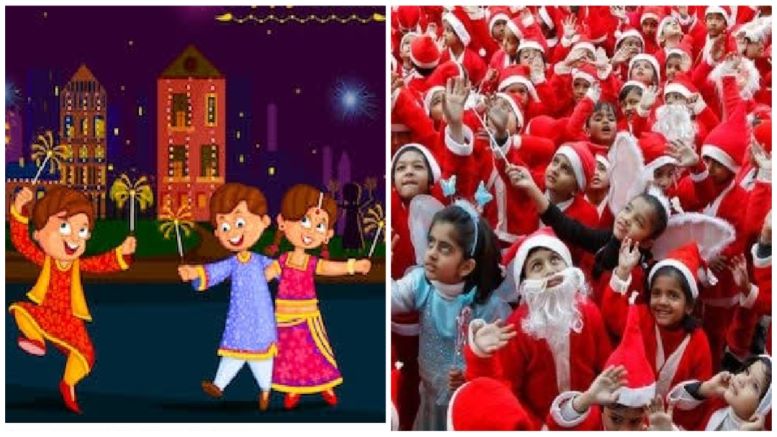 At a time when the Chinese Virus pandemic has sent an exceptional wave of negativity around, Hindus have much to rejoice in because every Hindu festival is a reason to celebrate which is even more important in these exceptionally gloomy times.

While growing up I always enthusiastically looked forward to the various festivals. Each of them had a unique charm that came from the celebrations associated with them. Holi meant selecting the pichkari (water tool for lack of a better word) days in advance, filling up water balloons the night before, and ensuring we stocked up on the colors.

Ganesh Chaturthi was all about dancing to the tunes of the dhol tashas as also the numerous bhajans that were played throughout the day and the competitions held every evening for 9 days. The vibes on the day of visarjan were simply electrifying. Similarly, there used to be dandiya nights on Navaratris.

Deepawali is one of those occasions which captures the festive joy in all its glory. My lasting memory of Deepawali besides shopping for a new dress and the excitement of waiting to wear it was waking up early and competing with friends to be the first to burst crackers.

Our celebrations were officially kickstarted by my grandmother who would set off the Tajmahal ladi at around 4 in the morning. The darkness of early mornings and post-sunset were reserved for fireworks such as chakris, sparklers, flower pots, pencils, wires, and rockets while ladis, atom bombs, and lavangis were burst at all times. The sheer variety of fireworks to choose from made the entire process enjoyable!

These are memories worth their weight in gold and it has been possible because we were brought up in a guilt-free environment. I don’t remember so much activism around Hindu festivals or maybe we were shielded by it by the elders in our family who allowed us to celebrate every festival with gusto. In either case, the fact remains that I have fond memories of guilt-free celebrations without the burden of activism.

These celebrations ensured that I was largely rooted in our culture despite the pressure of divorcing Hindus from our roots imposed by our education system. The Bharatiya education system is nothing but a continuation of the British education system with a liberal dose of Marxism mixed for good effect as a result of which deculturation of Hindus has been steadily taking place over the decades.

It is not just the education system but even the entertainment industry has been injecting Hindu hatred steadily and now with the arrival of OTT platforms this poison is being fed by cupfuls. But the education system and/or the anti-Hindu media and entertainment industries alone aren’t to be blamed. A fair share of the blames lies with Hindus themselves.

The Hindu society has dhimmified itself to such an extent that a fairly large percentage of Hindus are actually HINOS (Hindus in Name Only). Like my mother reminds us time and again, it is only us Hindus who have given up our culture and traditions unlike both the Muslims and Christians.

My observation over the years is that my mother has been spot on. Muslims will never skip Friday prayers and daily namaz nor will they shy away from proudly identifying themselves as Muslims. Similarly, Christians take pride in attending Sunday mass and declaring themselves as Christians first. Ask any Hindu and the answer would either be I’m secular, atheist, or Hindu with ‘n’ number of ifs and buts added for good measure.

Hindus are almost always shy of calling themselves proud Hindus for fear of being labeled “communal”. Why is the burden of secularism always on Hindus? The price that we have paid for tolerance is not just centuries of Islamic and British rule but decades of Marxist and pseudo-secularism imposed on us by Congress, Communists, and other political parties.

Have we ever paused and thought, it is this over-tolerance that has cost us the land that we gave away during partition to create two Islamic nations on either side that are simply waiting to turn Bharat into Dar-ul-Islam? In fact, there are pockets within Bharat that have become Islamic ghettos.

Has the Hindu society ever mulled over the anti-Hindu education we are giving our children in the name of convent education? It is this secularization that makes it easy for Christian evangelicals to convert Hindus. It is this deculturization that has created generations of Hindus cut off from their own roots who are in turn passing it on to their descendants.

The easiest way to kill a tree without using an axe is to pour acid at its roots. Marxists, Evangelicals, and Islamists ably supported by HINOS and dormant Hindus as well as selfish politicians have been pouring the acid known as secularism at the roots of the Hindu Dharma tree.

It is for us Hindus to not just stop the attack but to reverse the damage by rooting our children in Dharma. Celebrating festivals is one of several important measures in teaching future generations to be proud Hindus. Hindu dharma is naturally inclined towards saving the environment because for Hindus environment is a living entity and nature is divine.

We don’t need activists sitting in AC cabins and using fuel-guzzling and polluting SUVs all through the year to give us gyaan on how to save the environment. Especially when these activists have their tongues in knots when environmentally harmful acts such as slaughtering animals during Eid, Christmas, thanksgiving, cutting down of numerous trees during Christmas, bursting firecrackers during Christmas, Western New Year, political rallies, cricket tournaments, etc. are allowed to go on unabashedly.

Teach future generations to celebrate festivals with gusto. If we don’t teach our Dharma then others will teach them theirs. If the roots are not strong, the tree can be easily hacked. Islamists and Evangelists are always on the prowl to convert Hindus. We only need to look at America, Europe, Africa, and Australia who have lost their native religion to the Abrahamic ones and our own neighboring Islamic nations which were once part of Akhand Bharat where Hindu Dharma and other Dharmic faiths flourished.

The deracination of Hindus must be stopped before it is too late. We must teach our children that our dharma is our identity and we must never shy away from acknowledging our identity. If we do not respect ourselves then no one else will.

Hindu Dharma and festivals cannot be allowed to become social media campaigns of vested interests. As an unbroken civilization who have survived Islamic and Christian evangelical onslaughts and continue to be pushed to the walls by Abrahamic faiths, we owe it both to our ancestors and our future generations to keep Hindu Dharma flourishing.

It is our responsibility to ensure our children inherit our Dharma and wear it on their sleeves proudly.