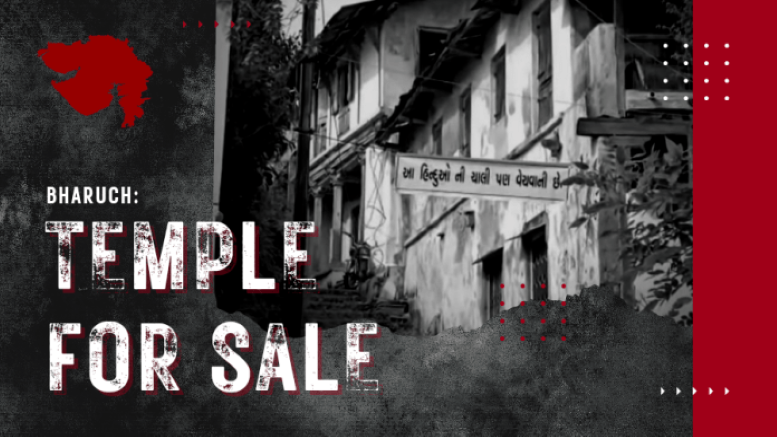 Demography change has often led to the exodus of Hindus in areas where they become minorities. A similar situation is now being witnessed in Gujarat’s Bharuch where Hindus are being forced to leave after demography shift has turned the area into a Muslim-dominated one.

A source quoted by OpIndia has, on condition of anonymity, revealed that bureaucratic apathy is creating a situation where Hindus are selling their houses and even the Jalaram Bapa Temple has been put up for sale.

Thursday evening Aarti has been a long-standing tradition at the Jalaram Bapa Temple that has now put up its space for sale. As per the aforementioned source, trouble started when the house opposite the temple was purchased by Shaukat Ali who subsequently got 28 houses in the society sold to Muslims. Ali raised objections to the performance of Aarti which has now been stopped at the temple whose land is being sold.

Loopholes in the Disturbed Areas Act, brought into force in parts of Bharuch in the year 2019, is now being exploited by unscrupulous elements including some who are part of the administration leading to a shift in the demography in some parts of Bharuch.

OpIndia quotes a source close to the development as saying:

Only Hindus lived in Soni Faliyo and Hathikhana areas in Bharuch at one point. Now there are hardly 20-25 Hindu families living there. They have decided to sell off their homes and leave. I’ll give you an example. You and I are both living in same residential society. You live in house no 11 and I in house no 12. Logic dictates that all houses in same residential society would fall under the Disturbed Areas Act if the area falls under it. But then these bureaucrats and others have found out loopholes. They claim that one house falls under one TP scheme and other in another and hence one house falls under Disturbed Areas Act while other does not. Everyone is turning a blind eye to this demography change.

A report by local media channel Gujarat Watch highlights that Hindus have put up signs stating their houses are up for sale.

It has also come to light that no help was given by the police and administration when residents protested against loopholes being exploited by people to take over their property. In stead, they were threatened with cases for ‘disturbing the peace’.

OpIndia has quoted Gaurang Rana who has pointed out the method of take over where the house was first purchased by a Hindu and a few months later the same house was bought by a Muslim. “Have you ever seen such transactions where a person owns home just for 2 months before selling it off? This when the houses fall under Disturbed Areas Act?”, Rana questioned.

He further highlighted that Hindus are being threatened with false cases by the new Muslim residents making it difficult for Hindus to continue residing in the area. Pleas to the administration have also not yielded any favourable result.

Talking of the pleas by the residents, the website says:

In a letter written to the administration, residents of Soni Faliya alleging illegal transfer of property to Muslim owners, said that the demography of the area is changing and it has turned into a Muslim dominated area. “If this happens, they could slaughter animals in public places which could be disturbing for Hindus, especially women and children, who are predominantly vegetarian. Similarly it may also cause hindrance to celebration of Hindu festivals. They have already stopped playing of religious songs at Jalaram Bapa temple and Shiva temple in the locality,” the residents say in a note to the Chief Minister of Gujarat written on 2nd September, 2020.

The residents have also leveled allegations against one Ramesh Prajapati Intawala, who sold properties to Muslims, of attempting to create communal discord and added that he has received huge sums of money from Muslims.

Residents allege a planned conspiracy to change demography. They say initially a couple of Muslims would buy houses at high prices which lures Hindus into selling their properties. However, with a shift in the demography the remaining Hindus are forced to sell their residences at lower prices and leave the area.

The website has also reported how Disturbed Areas Act is being circumvented using a Hindu partner to purchase land. In Surat’s Adajan, a Hindu partner was brought in temporarily by a Muslim builder who wanted to obtain permission for constructing a building next to a temple.

Such blatant misuse of law in a concerted effort to change an area’s demography needs to be checked. The state government needs to act with urgency to ensure that instances like that of Surat and Bharuch are nipped in the bud.