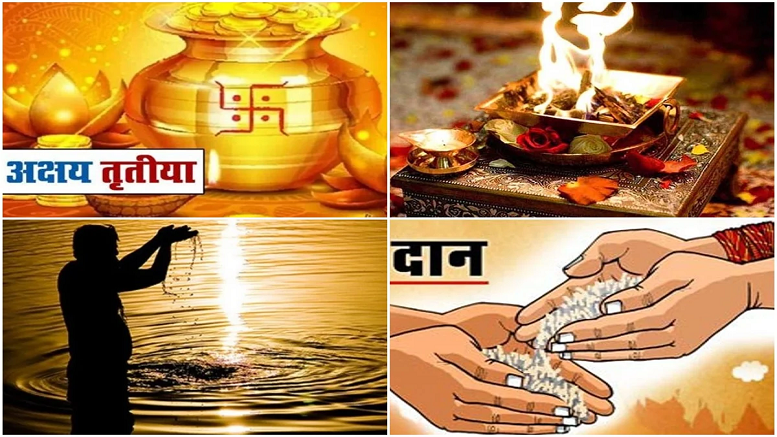 Do You know what the favourite place of Kali purusha is? Gold. And do you know that Akshaya means that which gives infinite. “Akshaya tritiya is a day which give Akshaya or infinite results to Karma done that day” Ironically, we are increasing the effects of adharma (Kali), by buying gold that day.

Never ever shastras said that Lakshmi resides in Gold, or is Gold in synonomity with Lakshmi. The places of Lakshmi and which give Lakshmi prapti are only four-

1. Hastha kumbhasthala (the head of elephant)

3. The place where a sumangali Applies Kumkum (above forehead or maang)

4. The Back portion of gowmata

Maa Lakshmi is pleased and blesses only when the above are worshipped. Sadly, on Akshaya tritiya, we are misguided to buy gold, and hence Kali doshas are multiplied, thereby causing great misfortunes.

1. Udakumbha Daanam – meaning giving a new pot full of water either to a temple or to anyone in need.

2. Galanthika Daanam – Galanthika means the pot which is on the Shivalingam which keeps pouring drops of water on Lingam. Galanthika should be donated to a Shiva temple to get rid of extreme difficulties that are burning our lives.

3. Gowseva – Any Daanam given to Gowmata as food, multiplies infinitely and clears many graha doshas, and misfortunes.

4. Pitru Tarpana – Tarpana given to Pitrus on this day give Akshaya punya lokas to departed souls, and hence clears all Pitrudoshas that are the major cause for uncertainty, misfortune, childlessness and failure.

5. Chandana seva to Vishnu – Any Vishnu murti, should be nicely covered with sandalwood paste at home in the morning and Pooja should be done to the murti. This is why chandanostsava is done in Simhachalam temple in Andhra Pradesh

9. Suvarna Daanam – gold should be donated, not owned. Ironically what we do is doing the opposite lured by advertisements and getting bad benefits.

Before getting lured by advertisements of great commercial people, we should explore shastras and help ourselves from doing wrong and getting benefits rightly.

(This article has been compiled from the tweet thread of @gowkinkara.)