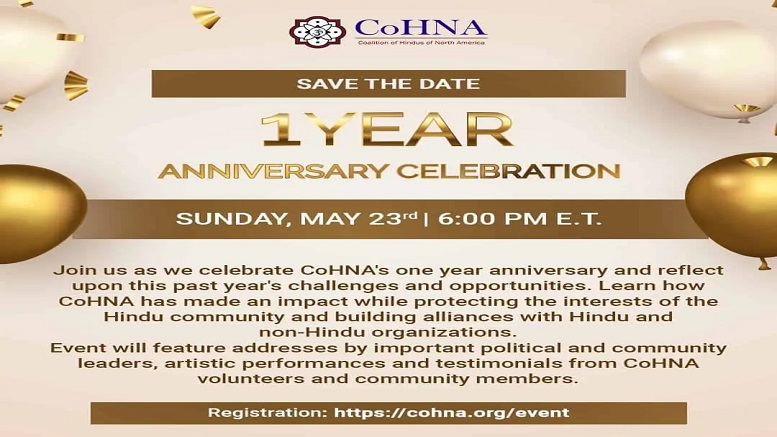 The Coalition of Hindus of North America (CoHNA) invites all Hindus for its first anniversary virtual celebration. CoHNA (pronounced: “Kohnaa”), is a grassroots advocacy group representing the Hindu community of North America. The coalition seeks to protect the collective interests of the Hindu community by working on the issues faced by them and educating the public about Hindu heritage and tradition.

They aim to create a vibrant society that can stand upon the pillars of mutual respect, pluralism, and sustainability. Hindu Dharma and Bharat’s ancient culture has enriched the world through millennia and continue to do so even today. Countries like the United States of America and Canada can reap the benefits of these treasures and develop a better understanding of our religious and cultural practices.

They aim to stand up for Hindu human rights by portraying Hindu Dharma and its values accurately. Hindu youth will be able to understand their issues and work with school and college administrators on topics related to Hindu Dharma and Bharat. CoHNA plans to ensure that Hindu religious and cultural practices are accurately portrayed through partnerships with journalists, writers, media outlets, etc. They interact with local and state/province level politicians and officials to create awareness of issues that are important to Hindus and to support their voices on key topics impacting the community.

A Jewish professor who teaches South Asian History at Rutgers-Newark named Audrey Truschke feels that Hindu deities are “misogynistic pigs”, argues that Bhagavad Gita “rationalizes mass slaughter” and that Mahabharata endorses “rape culture”. Hindus felt that such claims were made on social media without any academic backing, research, or a thorough understanding of Hindu Dharma.

Such Hinduphobic statements created a hostile and fearful climate on campus for the Hindu students and naturally, they protested against the same. Students who have pointed out her blatant lies and Hinduphobic statements were ostracized by Truschke. This led to constant harassment, bullying, and vitriol by her social media followers, and students were hit with slurs such as “dotheads” and “Nazi supporters” nonchalantly. It must be mentioned that Rutgers has thousands of Hindu students.

The motive behind her false claims became apparent when she started gloating over the conquests and whitewashing the brutality that Hindus of Bharat faced at the hands of barbarian Mongols like Aurangzeb and his Arab armies.

CoHNA appealed to the Hindu community and allies to stand in solidarity with students and support their efforts to bring about important changes at Rutgers in order to address the Hinduphobia and the blatant gaslighting that they face.

The work being done to differentiate between racism and caste is impressive. Caste as we know it now was anyway unknown in Bharat for many thousands of centuries. The missionaries and the invaders brought it as a tool to help them divide and rule.

Distinctions that have been resolved in Bharat have not yet reached many shores. Colonial mindsets try and revive their racism and interweave them with caste for their own personal gains. Those who still propagate caste and creed abroad would not dare do the same while in Bharat. Caste-based discrimination is illegal now and there are policies instead for caste-based affirmative action.

SWASTIKA EDUCATION & AWARENESS CAMPAIGN (SEAC) is an important step to teach semi-literates that Swastika has got nothing to do with the Hakenkreuz. Racist hatred by and against the Germans has dishonored a Hindu symbol of tranquillity, well-being, and auspiciousness (feelings that are hard to comprehend for some) that are held in high esteem and value by Hindus all over the world.

Those who compare the hatred of Hitler with Hindu hospitality can check with the millions of Jews, Parsis, Christians, Buddhists, and other religions who were persecuted on the basis of just their religion and upon becoming refugees overnight in their own countries were given protection and integrated into society by the Hindus in Bharat. They were not discriminated against and have risen to great heights in Bharat.

It is also pertinent to add that comparison between the so-called pockets of ‘Aryan blood’ in Bharat is scientifically proven to be non-existent. DNA results have proven that the Aryan-Dravidian divide doesn’t exist and leftists simply propagated something that the British used as a weapon originally to suit their agenda.

In fact, till as recently as 2015, the dubious Aryan Invasion Theory was being actively taught to students in Bharat! No one questioned it or attempted a proper study to correct it! As if as its consequence we have lost many languages prominent among then being the  Sanskrit Language.

CoHNA also attempts to explain the importance and the context of important laws passed by Bharat that have been misinterpreted on purpose by Islamists and anti-Bharat forces, both within and in foreign countries. The CAA bill and the abrogation of Article 370 in what was once a terrorist-infected Jammu and Kashmir are key examples of laws that were necessary but went unimplemented for many decades.

That the US invasion of Afghanistan hastened the pogrom against Hindus in that country is an open secret. In their quest to oust the Russians, the US pushed in the Mujahideen who then went all out against the Kafirs. Astonishingly the US looked away when it came to atrocities against Afghan Hindus and Sikhs and in fact, helped the Afghan Muslims immigrate to the west. A thriving estimated Hindu population of 700000 in the seventies became 220000 by the nineties and today less than 1000 are said to survive. How do those opposing the CAA bill in the US justify their own actions? Remember Bamiyan?

CoHNA’s stand towards opponents of the CAA in the US to check with their own twenty US senators who had written a letter to US Secretary of State Mike Pompeo in July 2020, urging him to provide emergency refugee protection to Hindus and Sikhs of Afghanistan is good as far as the US is concerned. As for the local ones, they seem to understand and have now moved on to other ‘major issues’. Case in point, oxygen/ corona/ vaccines.

As far as Article 370 and the Muslims in Kashmir are concerned, previous regimes had tried to pin them down in their own land by refusing (only in the J&K) to implement new laws that were bringing prosperity to the rest of Bharat. They were held like the Jews who now control Gaza. Abrogation of old rules and lesser administrative controls are leading to peace returning to the valley after many decades and enormous commercial opportunities are now opening up for Kashmiris. Attempts are being made to restore the dignity of the one million Kashmiri Pandits who were driven out of Kashmir in the late eighties, now!

In its first anniversary virtual celebrations, CoHNA would be reflecting on the challenges faced by it as well as how it build alliances and protected interests of the Hindu community in the past year.