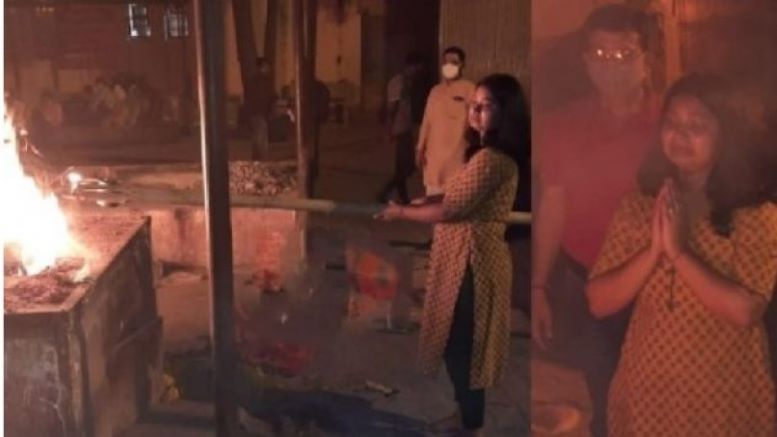 In yet another proof of how the Christian conversion mafia has been creating a rift between Hindu families, reports have emerged of a Christian convert son refusing to cremate his Hindu mother. Dharam Pratap Singh who became David after conversion reportedly wanted to bury his mother Saroj Devi and refused to cremate her as per Hindu customs even though his mother had not accepted Christianity.

According to available information, Saroj Devi’s granddaughter (daughter’s daughter) Shweta Suman traveled 1100 kilometers from Jharkhand and took custody of the mortal remains of her grandmother on Thursday. When her maternal uncle refused to perform the last rites, Suman took the onus of performing the cremation herself and conducted the cremation according to Hindu customs on Friday at Gwalior’s Lakshmiganj Muktidham.

Singh, a resident of City Center, had embraced Christianity and when his mother passed away on 2 June, he attempted to bury her as per Christian customs. However, However, Shweta Suman opposed this and said that since her grandmother had remained a Hindu till her last breath refusing to become a Christian, her grandmother should be cremated.

She put forward a plea with the Collector in this regard and sought the help of the Hindu Jagran Manch. Suman also alleged that her uncle had been pressurizing her grandmother to convert to Christianity. She further said that her uncle David wouldn’t allow them to communicate with Saroj Devi.

Suman has also requested the SP (Superintendent of Police) to conduct an inquiry into her grandmother’s death and her uncle’s attempts to pressurize her to become a Christian. SP Amit Sanghi has stated that they have received Suman’s complaint and are investigating the same. Additional SP Hitika Vasal has been asked to investigate the matter.

A similar case was reported from Palghar district’s Wada in November last year where two brothers fought over the cremation rites of their mother due to the seed of divisiveness sown by the Christian conversion mafia.

HinduPost had highlighted the case:

The divisiveness sown by Christian missionaries in dividing members of the same family came to the fore recently when a tribal woman named Fulia Dhabade belonging to Avandhe Village in Palghar died leaving behind her husband Mahadu and two sons Sudam and Subhash.

According to available information, Fulia, Mahadu, and Sudam had converted to Christianity while Subhash continued to follow Hindu Dharma. When Fulia died on 18th November, Mahadu and Sudam wanted to bury her but Subhash and the villagers were opposed to the move.

Wada police had to step in to mediate between the two. When police officer Sudhir Sankhe visited the village to solve the dispute, Mahadu said that since his wife had converted to Christianity, she followed the Christian faith and wished to be buried. Subhash, however, countered saying that it was his father Mahadu and younger brother Sudam who forced his mother to follow Christianity.

To create a rift among families is sanctioned by the Bible as has been said in Luke 12:53 Verse which reads:

It is, therefore, not surprising that Christian evangelicals brainwash converts such as Dharam, Mahadu, Sudam, and others by stating that their Hindu family members are “devil worshippers” and would be “going to hell”. Such is the level of brainwashing that these converts readily comply with the demands of the evangelicals. There is an urgent need to rein in the Christian conversion mafia.