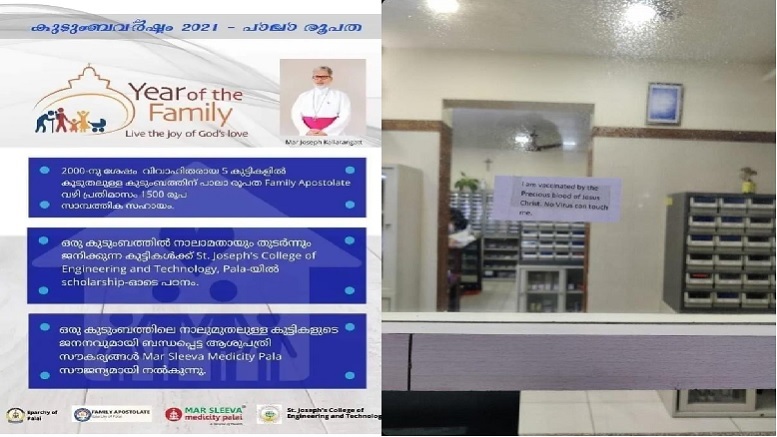 Even as the whole world fights to control its growing population, catholic priests in Kerala are actively encouraging their followers to produce more by assuring them financial benefits. The latest sops announced by Bishop Joseph Kallarangatt, who heads the Syro-Malabar Eparchy of Pala in central Kerala, include monthly assistance of Rs 1500 for having five or more children. There are scholarships for fourth and subsequent children in a church-funded engineering college and pregnancy-related expenses for women delivering their fourth and consequent children in another church-owned hospital.

This is all based on what the church ‘estimates’ is a ‘declining birth rate’ which the church itself never reveals. Most churches have exact numbers and rosters of their members. However, they almost never publish the actual demographic figures about their members. This reluctance on the part of minorities to show kaagaz is legendary and some surprises will ostensibly have to wait till the delayed census happens and ts figures are published.

These grand schemes were announced by Joseph during an online meeting organised by him and the posters above describe the details. They are applicable to all Christian couples who married after 2000 and are associated with that church. “We have realised that the strength of the community is declining,” he said. He admitted that the catholic church has been promoting more children in Christian families for a long time. This is in addition to the covert religious conversion drives that they undertake, especially amongst vanvasis.

The propaganda poster of the Church reads: “Year of the Family, Live the joy of God’s love”. Joseph said that increasing expenses involved in raising children should not be a hindrance to having more children even after the second or third child is born! The church is there to provide financial assistance and other benefits to such families!

He added that calls for a larger family concept of the Kerala Catholic Bishops’ Council were taken into account, i.e. all bishops involved concur that Catholics should have a larger family. When the absurdity was pointed out, the bishop accepted that he had said this, and added that he stands by what he has said. Meanwhile, the Church authorities pointed out they will come out with a detailed statement about it. The way in which corona has affected both finances and attendance of the churches, such appeasement moves will never be reversed.

Such priests run a large number of schools and hospitals in Kerala, but their attitude towards science is at best ambivalent. In hospitals, they actively propagate that Christians have been vaccinated by the blood of Jesus and that no virus can hurt them. In missionary-run schools, they poison young Hindu minds by mocking our gods.

Curiously, the media which jumps at any such suggestion by Hindu Sadhus, has been dead silent about this issue. The Hindu demography of Kerala is already under pressure from Muslims. The renewed efforts by Christians, backed with substantial benefits would only hasten the process to make Hindus a minority in the state.