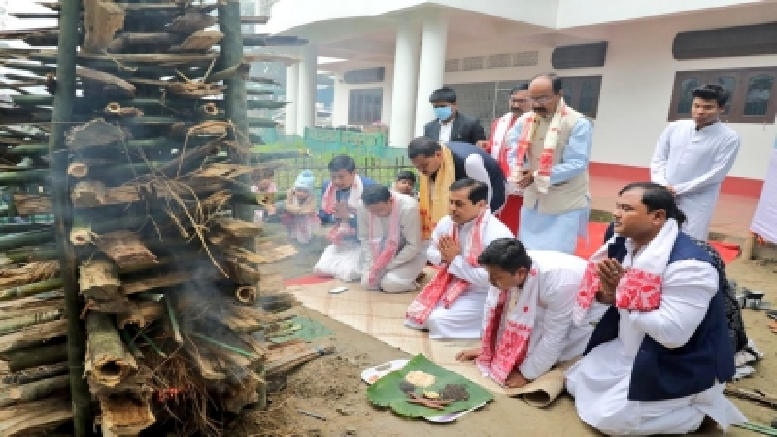 Amid the Covid-19 pandemic, the northeastern states on Thursday celebrate Bihu and Makar Sankranti, both harvest festivals, with traditional fervour and enthusiasm.

A festive atmosphere prevailed in the residential areas, villages and in mela (fair) grounds in the region.

People in Assam and other northeastern states were gripped in the spirit of Bhogali Bihu, a harvest festival also called ‘Magh Bihu’, giving a glimpse of pre-pandemic festive fervour.

The Bhogali Bihu, which began on Wednesday night with the celebration of ‘Uruka’, is an occasion for feasting and prayer to god for a rich harvest.

The ‘Uruka’ is the night of feast and merriment which is celebrated a day before the Bhogali Bihu, the main harvest festival of Assam.

The Bhogali Bihu celebrations began with people assembling around ‘Mejis’ (makeshift houses made of straw and bamboo) and lighting them, seeking the blessings of the elders.

People of all ages, mostly women and children, threw ‘pithas’ (rice cakes) and areca nuts after setting fire on the ‘Mejis’ and then offered prayers as part of the festivity.

After the traditional rituals, community feasts were organised in the open grounds and even in paddy fields as ‘Bhogali’ comes from the word ‘bhog’ which in Assamese means feast.

Governors and Chief Ministers of several northeastern states greeted the people on the occasions of Bihu and Makar Sankranti.

The festive enthusiasm among the people is more this time compared to last year, when Bhogali Bihu was a very low-key affair due to the series of protests against the contentious Citizenship (Amendment) Act.

The Assamese people also could not celebrate ‘Rongali Bihu’, a spring festival that marks the onset of Assamese New Year, last year due to the Covid-19-induced restrictions.

The tradition of Navreh & Navratri in Kashmir