Bharat’s Independence 2.0 : Exorcising the Ghost of Babar from Ayodhya is a Civilisational Shift for Bharat 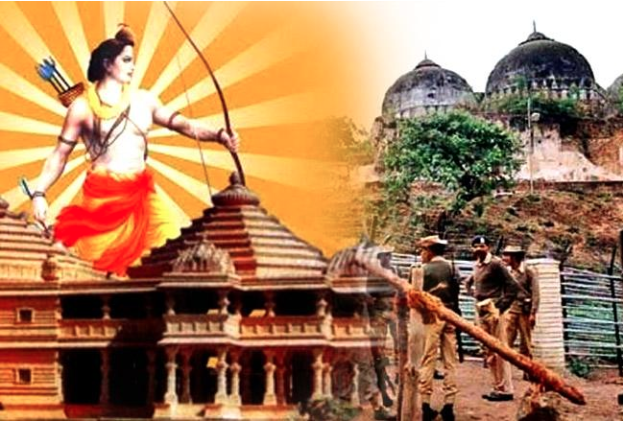 Pakistan was born out of a sense of insecurity among its power elites who feared losing their lands and power in the promised land reforms in the new Bharat, and a Muslim clergy with a deep inferiority complex vis-a-vis an incredibly rich philosophy of the ancient Bharatavarsha. It soon became obvious when the new country not only failed to write a Constitution for itself, but also lost its independence to its Military

The Dominion of Bharat, on the other hand, continued to move on with most of the inherited British institutions intact, and also adopted a Constitution in less than 3 years of its independence. The Constitution was by and large an adaptation of the British framework of the Govt. of India Act, 1935, with some additional features like universal suffrage, Fundamental Rights, and Directive Principles of State Policy thrown in as embellishments. Bharat called itself ‘India that is Bharat’ in its Preamble to the Constitution, but made no efforts to undo the effects of colonisation of its mind and culture that it was subject to over two centuries.

The British had left Bharat devastated economically and culturally. Bharatavarsha was a flowing river of an accepting culture that understood that all universe has a thread of unity running through it and that ‘One Reality’, or ‘Brahman’, or ‘Omkara’, manifested itself in a myriad little ways. When the Islamic invaders first descended with their barbarian hordes on the sacred land of Bharata, they brought with them the desiccated desert hot winds that kept belief above reason and self-experience.

The initial resistance of the martial aspects of Bharat’s culture kept the hordes at bay far longer than any other civilisation, nearly 500 years, but when it did give way in 1192 CE, it began a long night spanning nearly 750 years during which the essence of Bharatiya thought was hidden away, and salvaged by many Bharatiya rulers, but more than ever before, by its unique rootedness in the philosophy of divine immanence.

The believers of Islam did not have the intellectual capacity to damage this deep rooted philosophy and all they could do was to ravage the land, kill the non-believers, destroy, desecrate and convert the temples and also the people. This had very limited impact, and right till 1881, Muslims could barely make up 18% of the population of Bharat, which included Punjab and Bengal where they had become a majority.

In spite of this, the Hindu culture of openness and wide acceptance held sway among the masses to the great chagrin of the Muslim priestly class, including the Sufis. (Contrary to the popular perception, the Sufis totally follow the Muslim clergy and Hidaya, the commands issued by the authority of the Islamic clergy).

The Europeans were totally powerless in the face of a vastly superior culture that had no universal creed, but a universal sense of belonging to One Supreme. It took them over two centuries to formulate a response to this, but because of the renaissance in Europe against a dogmatic Church, and a resurgence of reason, science and individualistic capitalism, they sought to achieve their colonial objectives by doing a research (what used to be called purvapaksha in ancient Bharat) on Bharat and its culture. They were able to understand that the strength of Bharat lay in its cultural concepts of ‘One Reality behind all manifestation’, ‘Cyclicity of Time’, ‘Multi-valued Logic’, ‘Openness to Empirical Process’, and its great Scriptures.

Realising that their military superiority could be temporary, they went to great lengths to create a colonial philosophy, which they applied to all their colonies, as also to Bharat. It may, however, be noted, that they had the least success in Bharat among all their colonies. Though they caused a wealth of $45 trillion in current value to flow out of Bharat, they could not conquer its culture except creating a class of English educated elite, and creating divisions by postulating colonial theories like the Aryan Invasion Theory. The Aryan Invasion Theory was then skilfully used to create race divisions among north and south and caste divisions among scheduled communities and the rest.

While the colonial compulsions of the British can be understood, what happened after political independence, or ‘Independence 1.0’ defies all comprehension. The debates in the Constituent Assembly were an indication that the founding fathers of the constitutional Bharat understood the organic nature of Bharatiya society well and there was much discussion on including Dharma as a guiding principle, (Reference: Constituent Assembly Debates on Art. 25 to 30 of the adopted Constitution, corresponding to Art. 19 to 23 of the Draft Constitution).

Yet the English educated elite captured the levers of State power in the 1950s, specially after the 1956 Congress resolution at Avadi espousing socialism, after which the new Bharatiya Republic became a fully mechanistic State. This naturally culminated into denial and denigration of the organic Bharatiya tradition that did not view the universe in parts and compartments but as a whole.

The result was that that all the colonial stereotypes not only got reinforced, but the self declared Bharat breakers, the Communists were outsourced with writing of Bharat’s history, and guiding Bharatiya art and culture. While the Bharatiyas had rightly hoped that the thousands of temples that were demolished, desecrated, and built over by the Islamic invaders would be restored, all they got was a rationalisation of the evil deeds of the invaders, and the colonisers.

While Dr. Ambedkar wanted Sanskrit to be the link language of the country, what we got was a consolidation of English education. While Dr. Ambedkar emphasised that Islam was an exclusionary religion and partition should be followed by a complete exchange of population, the short-sightedness of rulers not only retained most of those who had voted for Pakistan in 1945–46 election to make it possible, but gave them special rights to continue the mindset that had brought about Pakistan in the first place.

If we look at the history of the Rāma Janmabhoomi movement post-independence, it is a total assertion of Bharatiya civilisational values. It is instructive that even when the idols were placed in the sanctum sanctorum in the intervening night of 22–23 December, 1949, the State Government had instructed the removal of the idols. It was a conscientious District Magistrate, KK Nayyar who refused to obey these commands and acted according to his own assessment of the situation.

It needs to be internalised that Rāma is a symbol of the Bharatiya civilisation. A culture is a self-view in which history of great men play an important part. Bharat has a tradition of exalting great men in history to the status of Avataras or incarnations of the ultimate divine in its refulgent glory. Unlike Abrahamic religions, the ‘One Reality’ that pervades all creation (not just humans as in Abrahamic religions) makes it easy for all to relate to these great men as a part of the divine themselves, giving them a template to follow.

The travesty of the post-independence Bharatiya colonial State has been its inability to understand that the Bharatiya mind does not work in a binary logic format, and the class divide tropes could only make a marginal headway. Rāma united the whole of Bharat at its civilisational route, and the Rāma Janmabhoomi movement became the greatest unifier in the history of independent Bharat, across castes, class and regions.

The leading establishment could not grasp the significance of this unifying force of Rāma, and has been the main reason for its eclipse, and the rise of political forces friendly to the movement.

The Bharatiya State continued on its self destructive colonial route vis-a-vis the Bharatiya culture impulse. Not merely this, it actually fortified the anti-Bharat forces in the academia, and patronised such abominations as the JNU humanities faculty. It is this self-same faculty that prevented an amicable settlement of the Ayodhya dispute. The Leftist academia is as culpable as any organised criminal gang for vitiating the religious atmosphere of the land by giving teeth to the quwwat-ul-Islam (might of Islam) assertion of the Muslim clergy.

The ugly spectacle of Leftist-Islamist alliance of the past decade or so only served to disillusion the Bharatiya public and a renaissance of sorts began to happen in the Bharatiya cultural milieu. This gained further ground with the rise f Internet and the traditional gatekeepers to publishing.

The Ayodhya verdict on Ram Janmabhoomi-Babri Masjid must be viewed in this background. It is the first judicial acknowledgement in 827 years of the untrammelled Hindu right to worship their deities in their own way. It was not allowed under the Islamic Law, and allowed only in name under the British who always kept Hindus under check in the name of maintaining law and order.

Most people would have read the judgment by the time this piece appears in print. While the judgment is a fine exercise in legal analysis, the additional reasons given in the form of an addenda to the judgment makes for a heartening reading — it demonstrates that even the Judges are now aware of the deeper philosophy that informs the Bharatiya culture. This, to me, is the real takeaway of the Ayodhya verdict. Exorcising Babar and Mir Baqui, and ‘Building of Ram Mandir in Ayodhya is a civilisational shift. Independence 2.0 is near. Republic 2.0 beckons’.

(This article was published on medium.com on November 10, 2019 and has been reproduced here with minor change –  reference to ‘India’ has been replaced with ‘Bharat’.)

India’s affair with the Anglosphere: Why we need strategic autonomy in culture & regulation