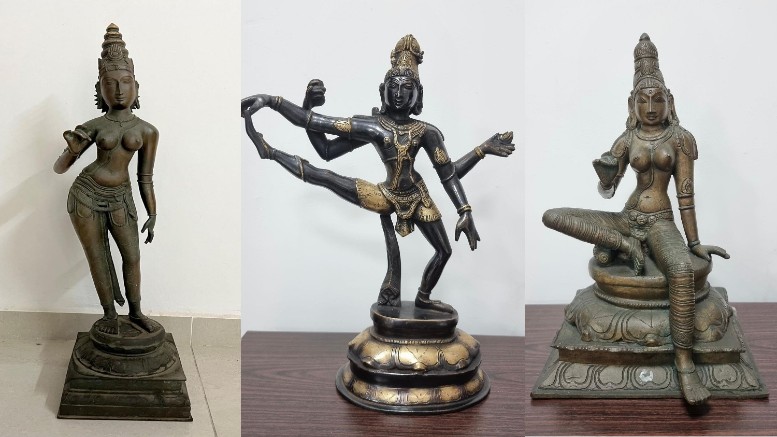 The Idol wing of the Tamil Nadu Police has traced two missing murtis of Bhagwan Ganesha and Goddess Devi at reputed museums in the US and has commenced the process to retrieve them.

The murtis of Devi and Ganesha were traced to the Sotheby’s auction house in New York and Norton Simon Museum in California respectively.

A senior officer with the TN idol wing told IANS that the wing commenced investigation after a watchman of the Arulmigu Pannakka Parameswara Swamy temple at Pannentheru in Nagapattinam district filed a complaint with the police that a murti of Bhagwan Ganesha was missing from the temple. On detailed investigation, sleuths found that not one Ganesha murti but a total of 11 murtis were missing from the temple since the early seventies and even the employees of the temple nor the devotees come to know of that as there were several murtis in the temple.

While the police recorded the complaint of the watchman, it was difficult to take the probe further as there were no pictures of the missing murti and hence sought the help of the French Institute, Puducherry. The French institute has a massive collection of photographs of the murtis of South Indian Temples and the search at the institute helped the police to trace the murti to the California Museum.

Murti of Goddess Devi was also traced out in a similar manner.

Director General of Police of Tamil Nadu Idol wing Police, Jayanth Murali while speaking to IANS said, “It was indeed a major shock to us to find out that it was not only one Ganesha idol but a total of 11 idols that were missing from the temple. We have commenced a probe and our team has traced Lord Ganesha and Goddess Devi and will cover the rest of the idols soon.”

The officers said that the temple had three Ganesha murtis and one is still at the temple. While one stolen murti has been traced to the California museum, the other missing Ganesha murti is still to be traced.

The Vinayagar murti, according to Idol wing officers, is valued at about Rs 3 crore in the international market. The murti is 1.5 feet tall and 1 foot wide and is exquisitely carved.