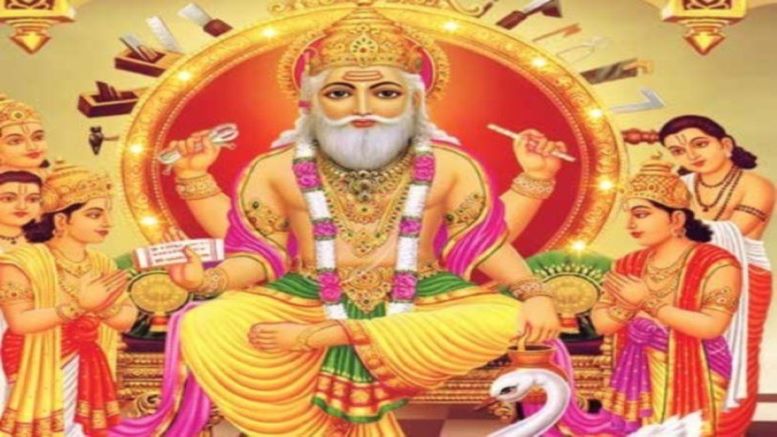 Since Bhagwan Vishwakarma is considered an expert architect, His Jayanti (birth anniversary) is also designated as architecture day. On the occasion of Vishwakarma Puja, it is customary to worship tools such as weapons, machinery, pen, and other devices.

According to Pauranic beliefs, Bhagwan Vishwakarma is said to be the son of son Vastudev and Devi Angirsi. Vastudev is the son of Brahmadev. As per some traditions, He is said to have emerged during the Samudra Manthan (churning of the ocean) while others say Vasu Prabhasa and Yoga Siddha are His parents.

Gayatri Devi is the name of His wife and He is often depicted as holding a pot (kamandal), noose, book, and craftsman’s tools in each of His four hands.

Besides helping Brahmadev in creating the universe, Vishwakarma has been credited with the construction/creation of several places, tools, and palaces. Dwarka, Indrapuri, Indraprastha, Hastinapur, Lanka, and Swargalok are His creations. Similarly, it is Bhagwan Vishwakarma who designed and created the Pushpak Vimana, Bhagwan Shiva’s Trishul, Bhagwan Sri Hari Vishnu’s Chakra, Bhagwan Yamaraj’s kaladanda (staff).

He has also been credited with the propagation of Sthapatya Veda which is the science of engineering, architecture, and mechanics. He finds mention is the oldest Hindu Grantha Rigveda.

Vishwakarma Puja is mainly undertaken in factories, workshops, and industries while devotees also perform Puja of their vehicles and other instruments. The festival is of great significance to professionals such as craftsmen, workers, architects, and engineers.

Bhagwan Vishwakarma is believed to bestow devotees worshipping him on this day with knowledge, working skills, and efficiency helping them to excel in their respective fields. Performing Vishwakarma Puja also earns his pleasure in helping keep the machinery and equipment in good working condition and grants success to industries.

Vishwakarma Puja is to be undertaken by all professionals so that they may earn the grace of Bhagwan Vishwakarma so that the upcoming year may pass off without any major technical problem.

Hindu Dharma is all about celebrating life and what better way to celebrate life than thank the architect who helped shape the universe. Hindupost wishes its readers on the occasion of Vishwakarma Jayanti and prays to Bhagwan Vishwakarma to grant success in all your professional endeavours.