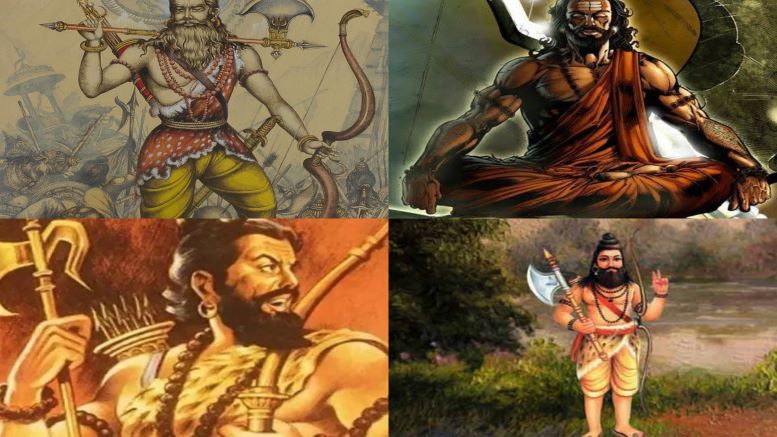 Bhagwan Sri Hari Vishnu descended to the earth from time to time for uplifting mankind. Bhagwan Parashurama is considered to be one among the Dashavatars (10 avatars/incarnations of Vishnu). Parashurama is more than just a sage who wielded a Parashu (axe) or one who annihilated Kshatriyas.

The birth story of Parashurama

She asked that both she and her mother be blessed with sons since her father Raja Gadhi had no son. Accordingly, Maharishi instructed his daughter-in-law that she and her mother were to embrace the Fig and Peepal trees respectively and consume the havishanna (special rice preparation) prepared exclusively for each of them. However, the two interchanged and exchanged the trees as well as the rice preparation.

Maharishi blessed her and accordingly Satyavati gave birth to Jamadagni who went on to become a great sage learned in the Vedas and having knowledge of Dhanurveda which is considered one of the Upa-Vedas. On the other hand, Gadhi’s wife gave birth to a son who was none other than the great Rishi Vishwamitra.

Jamadagni married Raja Prasenjit’s daughter Renuka Devi who gave birth to five sons. The first four sons were Rumanvan, Susheshan, Vasu, and Vishwavasu. Their youngest son was named Rama, the sixth avatar (avesha avatar) of Bhagwan Sri Hari Vishnu who was also known as Bhargava Rama since he belonged to Maharishi Bhrigu’s lineage. Despite being the youngest, his qualities surpassed them all.

When Jamadagni ordered his sons to slay their mother Renuka Devi for having committed a sin, his four elder sons refused to do so. But when Maharishi Jamadagni gave the same order to Parashurama, he did so without a moment’s hesitation. Pleased with his obedience, Jamadagni asked him to ask for whatever he wanted.

Parashurama asked his father to bring his dead mother back to life, ensure that she doesn’t remember that it was Parashurama who killed her, she doesn’t fall prey to such sin, his brothers who were cursed by their father return to their human form, no one should be able to face him in war, and that he lives a long life. His father granted him all his wishes.

Bhagwan Parashurama as an avesha avatar

An argument ensued between the two but Rama realized that it was Bhagwan Shiva in the disguise of a hunter. He then sang a stotra in praise of Bhagwan Shiva. Pleased with Bhargava Rama’s devotion, Mahadev presented him a Parashu (axe) to protect innocent people who are victims of injustice. Hence, Bhargava Rama became Parashurama as he went around with the axe protecting them.

Once Mahadev called Parashurama and asked him to fight on the side of devas against rakshasas. Bhagwan Parashurama said “I don’t have anything except the axe that you gave me. I don’t know dhanur vidya, how am I to fight?” Mahadev replied, “My amsha will enter you (avesha) and I will function through you and you’ll also acquire knowledge of dhanurveda.” Shiva tattva gave Parashurama (avesha) Bhagwan Shiva’s power and thereby made Parashurama insurmountable in battle.

The battle between Bhagwan Parashurama and Bhagwan Ganesh

Having slain all the Kshatriyas, Parashurama went to Kailas to salute his Guru Mahadev and Guru’s wife Devi Parvati. However, since the two were resting, Ganesh refused to allow Parashurama to enter. Their argument turned into a battle in which Bhagwan Parashurama threw his axe at Ganesh and broke his tooth.

Seeing her son injured, Devi Parvati became angry with Parashurama. On the advice of Bhagwan Vishnu, Parashurama sang the praise of Devi Durga to calm her anger. After having done the pooja of Mahadev and Parvati Devi and gaining their blessings, Parashurama returned to his home.

Parashurama is one of the eight Chiranjeevis who inhabit the earth and will dwell here till the end of this Yuga. His abode is atop Mahendragiri parvat where he lives to this day. After having given away the earth to Maharishi Kashyap, Bhagwan Parashurama asked the sea for a place to dwell.

The sea then told him to throw his axe and that he (the sea) would recede up to that point thereby giving land for Parashurama to live. The land reclaimed by Parashurama from the sea is known as Parashurama Kshetra which includes coastal areas of Kerala, Karnataka (Mangalore), Goa, Konkan, and Maharashtra.

Parashurama was a great teacher who trained the likes of Bhishma Pitamaha and Dronacharya. He is said to be meditating in a cave atop Mahendra parvat and gives darshan on Chaturdashi tithi. Bhagwan Parashurama is the epitome of parental devotion and bravery and worshipping him is said to rid devotees of all forms of tribulations and troubles.

Kantara: A cinematic marvel wrapped in Hindu spirit that pulls you to your roots