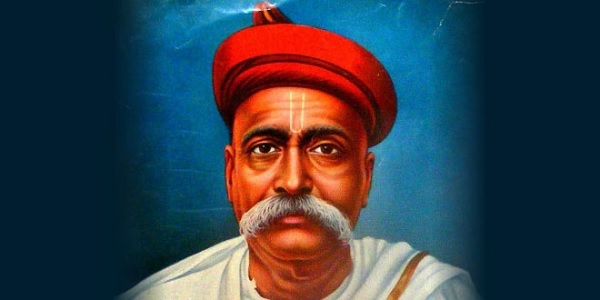 I am sorry I cannot address you in any other language except Marathi and English. English should be boycotted for religious purposes. But I cannot help and hope you will excuse me. I shall speak a few words on the importance of Hindu religion, its present condition and efforts that are being made to preserve it from decay.

Its name can only be significant if different sections of Hindu religion are united under its banner. All these different sects are so many branches of the Vedic religion. The term Sanatana Dharma shows that our religion is very old—as old as the history of the human race itself. Vedic religion was the religion of the Aryans from a very early time. But you all know no branch can stand by itself. Hindu religion as a whole is made up of different parts co-related to each other as so many sons and daughters of one great religion.

If this idea is kept in view and if we try to unite the various sections it will be consolidated in a mighty force. So long as you are divided amongst yourselves, so long as one section does not recognise its affinity with another, you cannot hope to rise as Hindus. Religion is an element in nationality.

The word Dharma means a tie and comes from the root dhri to bear or hold. What is there to hold together ? To connect the soul with God, and man with man. Dharma means our duties towards God and duty towards man. Hindu religion as such provides for a moral as well as social tie. This being our definition we must go back to the past and see how it was worked out. During Vedic times India was a self-contained country. It was united as a great nation. That unity has disappeared bringing onus great degradation and it becomes the duty of the leaders to revive that union. Hindu of this place is as much a Hindu as the one from Madras or Bombay.

You might put on a different dress, speak a different language, but you should remember that the inner sentiments which move you all are the same. The study of the Gita, Ramayana and Mahabharata produce the same ideas throughout the country. Are not these common allegiance to the Vedas, the Gita and the Ramayana—our common heritage?

If we lay stress on it forgetting all the minor differences that exist between different sects, then by the grace of Providence we shall ere long be able to consolidate all the different sects into a mighty Hindu nation. This ought to be the ambition of every Hindu. If you thus work to unite, you will find within a few years one feeling and one thought actuating and dominating all people throughout the country. This is the work we have to do.

The present condition of our religion is not at all one that is desirable. We think ourselves separated and the feeling of that unity which was at the root of our advancement in the past is gone. It is certainly an unfortunate circumstance that we should have so many sections and sub-sections. It is the duty of an association like the Bharata Dharma Mahamandala to work to restore the lost and forgotten union.

In the absence of unity Bharat cannot claim its place among the nations of the world. For some two hundred years Bharat was in the same condition as it is today. Buddhism flourished and attacks were made on Hindu religion by Buddhists and Jains. After 600 years of chaos rose one great leader, Shankaracharya and he brought together all the common philosophical elements of our religion and proved and preached them in such a way that Buddhism was swept away from the land.

We have the grand and eternal promise Shri Krishna has given in the Gita that whenever there is a decay of Dharma, He comes down to restore it. When there is a decay owing to disunion, when good men are prosecuted, then Shri Krishna comes down to save us. There is no religion on the face of the earth except the Hindu religion wherein we find such a hopeful promise that God comes to us as many times as necessary. After Mahomed no prophet is promised, and Jesus Christ comes once for ever. No religion holds such promise full of hope. It is because of this that the Hindu religion is not dead. We are never without hope. Let heretics say what they may.

A time will come when our religious thoughts and our rights will be vindicated. Each man is doing his best, and as the association is doing its best, every Hindu is welcome to assist it and carry it to its goal. If we do not find men coming forward let us hope they will do so in the next generation. We are never without hope; no other religion has such a definite and sacred promise as we have of Shri Krishna. It is based on truth and truth never dies. I say it and I am prepared to prove this statement.

I believe that truth is not vouchsafed to one only. The great characteristic of truth is that it is universal and catholic. It is not confined to any particular race. Hindu religion tolerates all religions. Our religion says that all religions are based on truth, “you follow yours, I mine.”

Can the religion which counts its followers by crores die? Never, unless the crores of our fellow-followers are suddenly swept away our religion will not die. All that is required for our glorious triumph and success is that we should unite all the different sects on a common platform and let the stream of Hindu religion flow through one channel with mighty consolidated and concentrated force.

This is the work which the Bharata Dharma Mandala has to do and accomplish. Let us be all united. Because a particular man wears a particular dress, speaks a different tongue,  worships a particular devata, is that any reason for our withdrawing our hands of fellowship to our Hindu brother? The character of our Hindu religion is very  comprehensive—as comprehensive as its literature itself ; we have a wonderful  literature. Wisdom, as is concentrated in Gita and epitomised in about 700 verses, that wisdom, I am confident, cannot be defeated or overcome by any philosophy, be it Western or any other.

Now I turn to the forces that are arrayed against us. There are mainly two forces of (i) science and (2) Christianity. If our religion is threatened with any hostile criticism, it comes from these two. As for the first, a great change is coming over the West and truths that are discovered by them were known to our Rishis. Modern science is gradually justifying and vindicating our ancient wisdom.

With the establishment of Physical Research Societies and the expansion of scientific knowledge they have come to understand that the fundamental principles of our religion are based on truth that can be proved. Take an instance. Chaitanya pervades every thing. It is strictly a Hindu theory. Professor Bose has recently shown that this Vedantic doctrine is literally true according to modern science. Take the doctrine of the survival of soul independent of the body.

Doctrines of Karma and Re-incarnation go with it. Spencer never believed in these. But recently it has been our great privilege to see that Sir Oliver Lodge and Mayor and others have declared that the soul does not die with body; so much now they are convinced of. Modern science accepts the doctrine of Karma if not of re-incarnation. But it is not the belief of Christianity. They hold that God gives a new soul each and every time. Thus it would be seen that a change is coming over the West.

Our enemies are fast disappearing before the teachings of modern science, take courage and work hard for the final triumph. If you make a little effort and aim at union, you have a bright future before you. Now-a-day, Vedanta is not only read but studied by Americans. No European doctor believes that the beating of the heart can be voluntarily stopped. But it has been proved to the contrary. Vedanta and Yoga have been fully vindicated by modern science and these aim at giving you spiritual union.

It is our clear duty, therefore to follow truth and re-edit our scriptures and place them before the world in the light of modern science that they may be acceptable to all. But I tell you again unity is necessary for such work. You would be wanting in duty to yourself and to your ancestors if you do not give up provincial prejudices and promote unity that underlies all sects.

We have been very idle. We have grown so stupid owing to our idleness that we are required to be told by foreigners that our treasures conceal gold and not iron. Modern science and education are prepared to help you if you take advantage of them, and time will come when instead of Christians preaching Christianity here we shall see our preachers preaching Sanatan Dharma all over the world. Concentrate all our forces. The idea of a Hindu University where our old religion will be taught along with modern science is a very good one and should have the support of all.

In conclusion, I would again draw your attention to bring about a harmonious union of all sects and rightly claim and obtain our rightful place among the nations of the world.

(This excerpt of the book was shared here)