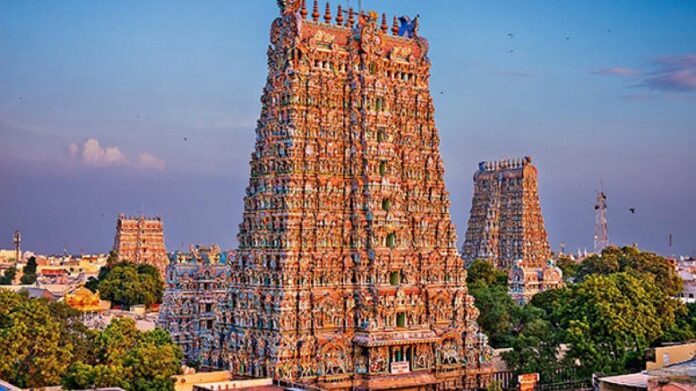 Attempts are being made to erase the Hindu identity of Madurai Meenakshi Amman temple by leaking specific carefully crafted information about inscriptions. The temple management had appointed a team of archeologists and epigraphists to read the 400+ inscriptions that were left out earlier. The researcher who headed the team has given out specific information to paint an image that the identity of the temple and the deities have gone through changes in recent times.

Santhalingam, the retired researcher of the Tamil Nadu Archeological Department who headed the team, told the media that the presiding deities of Madurai temple were not known as Meenakshi and Sokkanathar, the Sanskrit names of Bhagwan Shiva and Parvati Devi. He claimed that there is no mention of the names Meenakshi and Sokkanathar in the inscriptions till 1752 and 1710, respectively.

The committee had decoded and extracted information from nearly 450 inscriptions, out of which only 78 were complete while the remaining were in bits and pieces. Out of the 78 complete inscriptions, 77 were written in Tamil Brahmi and the remaining in Sanskrit. Researchers claim that the inscriptions say the presiding deities were known as ‘Aalavai Udaya Nayanar’ and ‘Thiru Kamakottam Aaludaya Udaya Nachiyar‘ and the Sanskrit names are a recent phenomenon.

It appears to be an attempt at pandering to the lobby that protests that Tamil society had nothing to do with Hindu dharma. History buffs called it out by pointing out inscriptions of Pandya kings who built and patronised the temple continuously in which the name Sokkar has been used.

It is common knowledge that Madurai is not located anywhere near the earthquake-prone zones and the Vaigai river, on the banks of which Meenakshi Amman temple is located, runs dry around the year. It could have been different centuries ago, yet the epigraphists who read the inscriptions in the temple claim that ‘some natural disaster’ caused severe damage to the temple destroying even the garbhagriha in 1250 CE.

The temple had faced the onslaught of the Islamic invasion in which the murtis in the garbhagriha were targeted in the 14th century. Fortunately, Hindus of that time got wind of the incoming Islamic forces, built a wall to hide the garbhagriha, and placed a replica in front of the wall to deceive the barbarians. The replica severed by Ulugh Khan’s forces is still displayed at the temple. Yet so-called experts brazenly call it a ‘natural disaster’.

It should be noted that even though the Islamic invasion ravaged Madurai at the beginning of the 1300s, Pandya forces had Mohammedan soldiers who left their king and joined the invading forces. During the first invasion of Malik Kafur, which the Pandyas lost, Muslims in Veera Pandya’s forces defected and joined the invader. Thus the ‘natural disaster’ inference appears to be an assumption on seeing inscriptions about the temple being renovated and certain parts rebuilt by the Pandya descendants.

Unfortunately, history doesn’t depend on assumptions but on hard facts. The Chola dynasty gaining attention after the release of the Ponniyin Selvan movie seems to have become an eyesore for some people. There is an anti-Brahmin crowd that hates Cholas as well because Brahmins were respected by Chola kings and followed Manu Smriti.

Dr.Santhalingam, head of the team, told in an event organised by Tamil Virtual University that “Cholas never entered Meenakshi temple in the 200 years Madurai was under their rule”. This is an inference of the archeologist because there are no inscriptions from Chola kings in the temple. He himself told the media that many of the inscriptions are badly damaged due to careless handling of HRCE.

Yet he chose to ‘infer’ from lack of Chola inscriptions: “In most of the temples, Lord Shiva, who is also called as Nataraja, dances in a pose keeping the right leg on the ground and the left leg flying in the air. But, in the Madurai Meenakshi Amman temple, it is claimed that due to the prayers offered by a Pandya king, the God, to show his love, changed his pose. So, here we see Nataraja dancing with his left leg on the ground and his right leg flying in the air. The Chola kings could have been angry with the Pandyas for changing the pose of their God.”

Cholas were ardent Shiva bhaktas, and their lack of interest in the Meenakshi temple would be an interesting point to ponder for historians. But lack of inscription doesn’t necessarily mean they never set foot in the temple or patronised it. This inference appears to be an attempt to diminish the glory of Cholas while trying to establish Pandyas as a ‘secular dynasty’.

Politicians like Thirumavalavan spread canards that major Hindu temples in TN like Madurai Meenakshi, Srirangam Ranganathar, and Chidambaram Natarajar temples were Buddhist shrines taken over by ‘invading Aryans’. They even called for demolishing the temples and ‘reclaiming’ them. With blatant attempts to secularise the findings in Keezhadi excavations, this new effort to erase the Hindu identity of Madurai Meenakshi temple doesn’t come as a surprise.