As mercury dips, enthusiasm rises for Magh Mela in Prayagraj 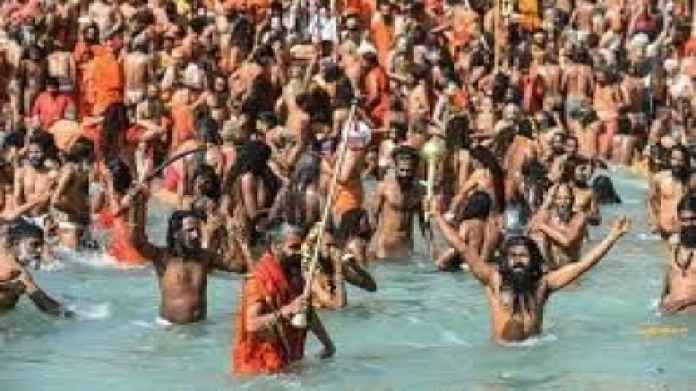 With temperatures going down and freezing conditions prevailing on river bans, Prayagraj is all set to host the 44-day long Magh Mela that begins on Friday.

Devotees have already started arriving at the tent city set up on the banks of Ganga and Yamuna.

The Yogi Adityanath government has made arrangements for an estimated seven crore pilgrims who will take the holy dip at the Sangam — the confluence point of Ganga, Yamuna and Saraswati — during the Magh Mela-2023.

The Mela is one of the biggest annual religious affairs for Hindus attracting men and women from across the country besides seers.

Hindu history considers the origin of the Magh Mela to be the beginning of the Universe.

An important occasion, the Magh Mela is held every year on the banks of Triveni Sangam and finds mention even in the Hindu epic Mahabharat, major Puranas and ancient Hindu texts about a wide range of topics, particularly about legends and other traditional lore.

The religious basis for the Magh Mela is the belief that pilgrimage is a means for atonement, penance for past mistakes. The effort cleanses people of sins and that bathing in holy rivers at these festivals is a means to liberation from the cycle of rebirths.

Being organised at a budget of Rs 78 crore, the annual fair is housed in a tent city with five pontoon bridges interlinking it.

It has 1,000 km of metal chequered plate roads and 5,000 police and security personnel guarding it.

Apart from making arrangements grander than ever before, the administration this time has added a few elements to the mela.

Promising a truly grand Maha Kumbh-2025, Chief Minister Yogi Adityanath said if Prayagraj was improved in a comprehensive manner, it would be transformed into a “New Prayagraj” for Maha Kumbh-2025, starting with Magh Mela-2023.

“As many as 1,400 fibre-reinforced plastic toilets will be installed here. Apart from this, 10,000 tent toilets and 3,000 other toilets will also be installed in the parking area. Another 1,600 toilets are to be set up in the camps of main religious and other organisations attending the fair. An STP has also been constructed in the Magh Mela area. The cleaning system of the fair will be in the hands of 2,160 sanitation workers,” he stated.

Besides distributing free cloth bags, officials have planned playing messages related to the Swachh Bharat Mission campaign on LCD screens being installed in the Mela area.

Divisional Commissioner Vijay Vishwas Pant said with an aim to provide best of facilities to pilgrims and visitors alike, a 500-bed dormitory will also be constructed at the fair. For the first time, water sports activities like water polo, triathlon and others will also be organised during the fair to attract tourists.

Mela officer Arvind Chauhan said all the sectors of the fair have been divided into zones/circles. and for the first time, their proper digital mapping will be done. The aim is to put up signboards ‘You are here’ at every intersection of the fair area that would allow visitors to know exactly where they stand.

To help visitors, young volunteers will also be engaged. An agreement has been made on engaging college students for this. About 700 ‘mela friends’ will be seen helping devotees.

In light of the Covid threat, 100 helpdesks too have been set up to undertake awareness drives among pilgrims and also undertake their vaccination.

Chief medical officer Anshu Pandey said four-member health teams would remain stationed at all 18 entry points of the fair. They would do random screening of pilgrims.

The Magh Mela holds special significance for the kalpvasis who stay on river banks for the entire duration of the Mela and take holy dip in the river every day.