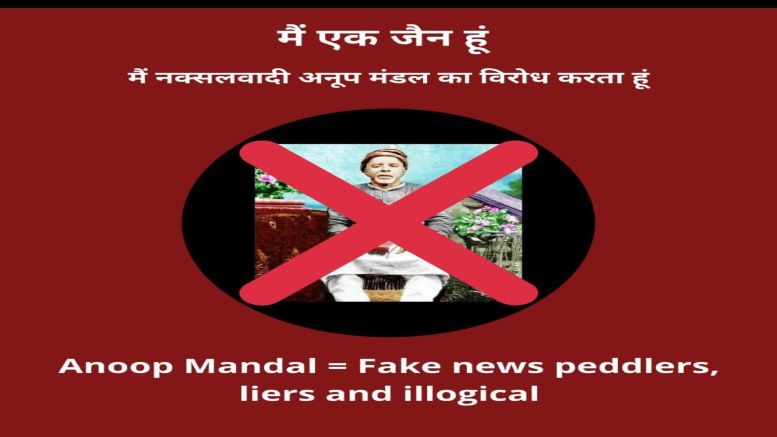 In a video that surfaced recently, people associated with the Anoop Mandal cult were seen raising slogans against Jains and blaming the latter for the Chinese Virus pandemic. The cult was started by one Anoop Mandal Das hailing from Rajasthan’s Pali district who believed that Jains in general and Jain monks in particular, were the root cause of all societal problems. The cult also blames baniyas (trader community) for humanity’s ills.

The cult has a major following in the Pali and Sirohi districts of Rajasthan. The cult is said to be around 125 years old. A book on Jainism titled ‘The Assembly of Listeners: Jains in Society’ written by 2 foreign researchers has this to say about the Anoop Mandal cult:

“Anoop Mandal was started in 1920 by Anoop Das, who was influenced in Europe by communism and fought in Turkey in the year 1914. He gave a class character to the social hierarchy in which Jains held high economic status and were able to capture administrative power.

His movement had certain distinctive features. He used indigenous terms and language to criticize the Jains. His focus was on lower castes, which were economically deprived, but he excluded Harijans…… Folklore was created, which projected Jains as outsiders, exploiters, and non-Hindus. Harchand Soni, a comrade of Anoop Das, wrote catchy verses that got popular and were sung by followers as bhajans. The movement inculcated a feeling of hatred for Jains, and a number of village-dwelling Jains were raided by Anoop Mandal workers. Religion was used as a means to start a class war.”

Amrut Prajapati, national president of Anoop Mandal claimed that Anoop Das achieved “enlightenment” after which he wrote a book titled Jagathitkarni in which he has alleged that the world had to unite against Jains who are the ‘root cause of all problems’.

Anoop Mandal followers even blame Jain monks for natural disasters such as floods, earthquakes, tsunami, etc. They claim that Jain monks practice black magic in order to prevent rains and hence Rajasthan faces water shortages. According to available information, Anoop Mandal members have been supposedly involved in murders and deliberate accidents of about 500 Jain monks. This cult even claims that Vedas and Ramayana are false.

The cult has been brainwashing villagers and exploiting them by poisoning their minds against the Jain community thereby attempting to disrupt communal harmony in the society. It is high time that Rajasthan and Gujarat governments initiate strict action against Anoop Mandal and ban for spreading false propaganda and inculcating a feeling of hatred towards Jains.