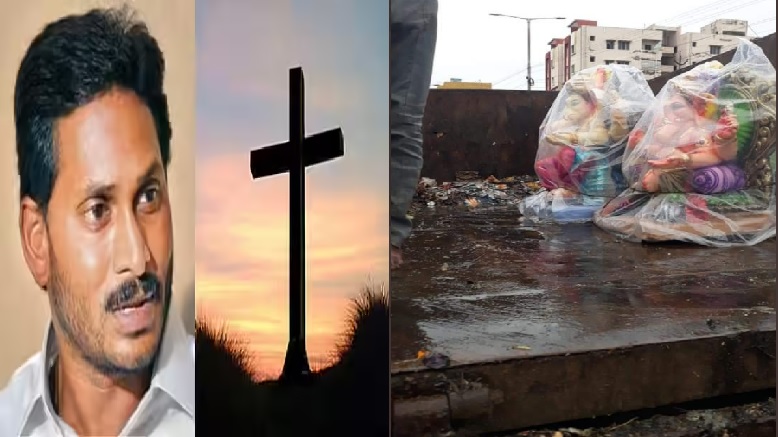 Here is the video from Guntur, Andhra Pradesh. pic.twitter.com/zu2SGGn3sV

Many Hindus believe this is yet another deliberate slight to their religion under the Jagan regime in Andhra.

“Putting Lord Ganesha idol in a garbage truck is not just an accident but a part of concrete nefarious design of Jagan govt to humiliate Hindu religion. The use of garbage truck for moving the idol is a reflection of the garbage mentality of Y(SR)CP goons,” tweeted Y. Satya Kumar, BJP National Secretary and founder of NGO ‘Sanskriti’..

Protests have already been intensifying in the state over the strict curbs imposed on Ganesh Chaturthi festival celebrations. The government has banned all public celebrations of the festival and disallowed pandals altogether.

The YS Jagan Mohan Reddy led YSRCP government claims this has been done in light of the health department’s warning about a ‘possible outbreak of a third wave of Covid-19’. Andhra is seeing only around 1300 new cases each day for the last 2 weeks, and has given at least one vaccine dose to around 46% of the total population (national average is 40%). Its test positivity ratio is also quite low at 2.2%.

Hindus in the state have alleged that the state government is trying to create obstructions only for Hindu festivals. Hindu Yuva Shakti (HYS) appealed to the government to revise its decision and permit celebrations with restrictions.

“YSR’s death anniversary was celebrated with huge gatherings, government schemes are launched with huge crowds, Muharram is celebrated in public. No restrictions were imposed for the above events and festivals. Why does this government only prohibit Ganesh Chaturthi even though the Covid-19 situation is under control across the state. The government should impose restrictions and permit pandals with nominal crowds,” said Chikkala Rajanikanth, state president of HYS.

Despite the Covid-19 threat, Christmas was celebrated in public last December, at a similar time when the nation was just coming out of the first wave of Covid-19. Local TV channels had reported ‘grand Christmas celebrations’ with government buildings like Raj Bhavan and churches decked up. CM YS Jagan Mohan Reddy himself participated in Christmas special prayers at a CSI Church.

There have been a spate of vandalizations, arson and other attacks on Hindu temples across the state in recent months. The Christian conversion machinery which established a base in the coastal state during the term of Jagan’s late father, Y. S. Rajasekhara Reddy, has grown even more brazen with pastors openly abusing Hindu Dharma, denigrating Hindu deities, encouraging converts to fraudulently claim benefits meant for SC Hindus, and even talking of creating a separate country for Christians.