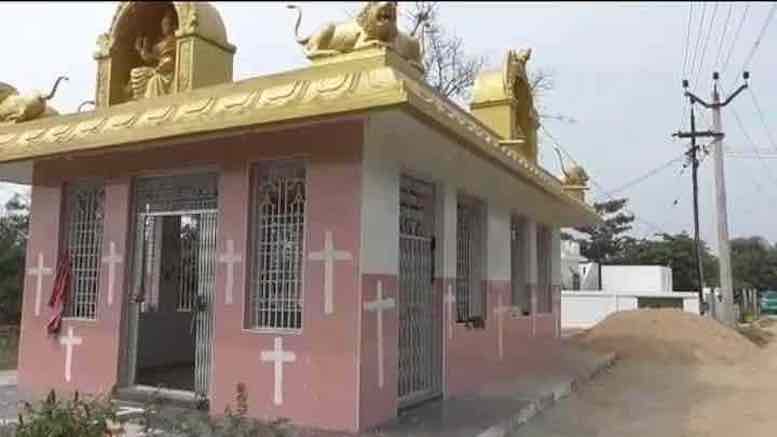 In a shocking act which has grievously hurt religious sentiments of Hindus, an Amman temple has been desecrated by a converted man. As everyone went to bed after Pongal celebrations, an Amman temple in Ellapalli, a small village near Andhra-Tamil Nadu border in Thiruppathur district, TN was desecrated by a rabid Christian convert. The Amman temple which is said to be more than 250 years old was recently renovated with new structures as per the locals.

Temple vandalism is on the rise all over India. @HMOIndia needs to take immediate action! pic.twitter.com/dJuH80LPNM

Villagers allege that one Bhaskar, son of Mahendran and Baby has been repeatedly targeting the temple. He has desecrated the temple earlier too and was arrested based on the village Hindus’ complaint two times. Yet on 14.01.2021 he is said to have switched off the lights and drawn the Christian Cross all over the temple and in front of the presiding deity. He drew crosses on the electricity poles and the bridge adjoining the temple as well.

When Hindus confronted him he is said to have abused them in obscene language and flaunted that the people he is working for cannot be touched. He also confessed that he executes such acts on their motivation. In the past Bhaskar broke the deity’s murti and Hundi for which he was arrested. Yet he boldly desecrated the temple again. People have filed a complaint with the police based on which he has been arrested.

But the threat of him coming back to keep at it looms large and Hindu Munnani, a popular Hindu outfit confronting missionaries has pledged their support in protecting the temple and taking necessary actions to get Bhaskar punished. Andhra Pradesh which has turned out be the hot bed of evangelists who desecrate temples to show their might was in news for continuing temple attacks throughout the year in 2020. Now the areas bordering AP also seem to be under their attack.